10 of Desmond Tutu's Most Defining Moments 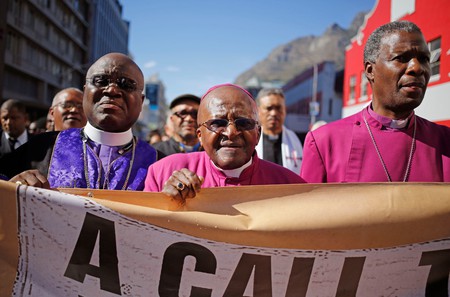 Desmond Tutu is a South African Anglican cleric who played a remarkable role in the fight against apartheid. He was the first black African to earn the position of Bishop of Johannesburg, and was Archbishop of Cape Town from 1986 through to 1996.

Tutu remained an active citizen following his retirement from the church, and then public life, and continues to champion various human-rights issues. His name is held with high esteem around the world, owing to his incredible contribution to the country, his inimitable style, wicked sense of humour, progressive outlook and inability to stray far from important issues – even as he approaches his 87th birthday.

Tutu says his meeting with English Archbishop Trevor Huddleston at age nine was the most defining moment of his life. He witnessed the white priest doff his hat to greet his mother, a black, working-class woman – an act that stayed with him throughout his fight against apartheid. He wrote of the incident in an article for the Cape Times, saying, “It was something I could never have imagined. The impossible was possible.” 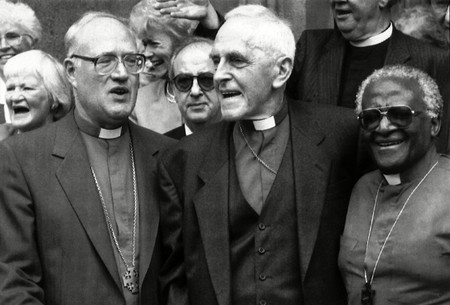 When the apartheid government began to advance and implement its policy of racial segregation, one of the first elements to undergo radical transformation was education. The apartheid government deliberately created an inferior system for black students, and as a trained teacher, Tutu refused to participate in the system governed by the Bantu Education Act. Determined to impact on the lives of those around him, he instead became a preacher, and used his position to support those disenfranchised by the political system of the time. 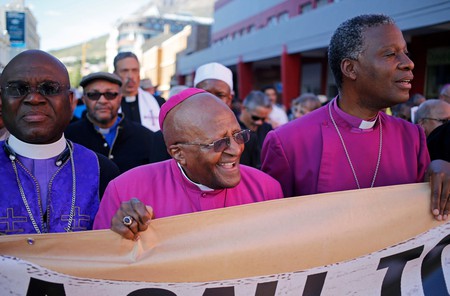 Ordained as a priest

Tutu began to study as an Anglican priest on the suggestion of his own bishop. He was ordained as a priest in the Anglican church in 1960, as the apartheid government continued unabated with some of the harshest measures of the regime, including forced removals of black people from so-called white areas to ‘homelands’. 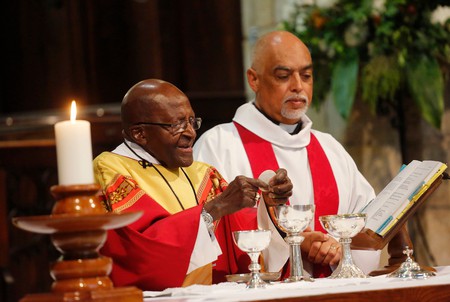 Left South Africa to study in the United Kingdom

Used position to speak out against apartheid

When Desmond Tutu became the General Secretary of the South African Council of Churches in 1978, he used his position to denounce apartheid. He famously labelled the regime “evil and unchristian”, called for equal rights for all South Africans and demanded the repeal of apartheid laws and forced relocations. He called for nonviolent resistance, and pushed for economic sanctions on South Africa to help end the apartheid government’s reign. 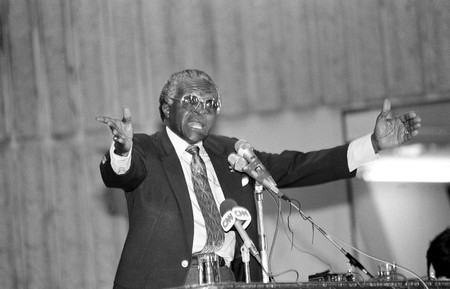 Mandatory Credit: Photo by Tsugufumi Matsumoto/AP/REX/Shutterstock (7332690a) South African Bishop Desmond Tutu speaks with outstretched arms before about 500 people, including ambassadors from 24 African nations, at an outdoor amphitheater at Tokyo's Hibiya Park, . The Nobel Peace Prize laureate, currently in Tokyo after participating in a peace symposium in Hiroshima for the 41st anniversary of the world's first atomic bombing, called on Japan to join other countries in imposing sanctions on South Africa Desmond Tutu, Tokyo, Japan | © Tsugufumi Matsumoto/AP/REX/Shutterstock

In 1984, Tutu was awarded the Nobel Prize for Peace in honour of his ongoing efforts to end apartheid in a non-violent manner. In his Nobel Lecture in 1984, Tutu was famously outspoken about the apartheid government, saying of South Africa, “There is enough of the good things that come from God’s bounty, there is enough for everyone, but apartheid has confirmed some in their selfishness, causing them to grasp greedily a disproportionate share, the lion’s share, because of their power.” 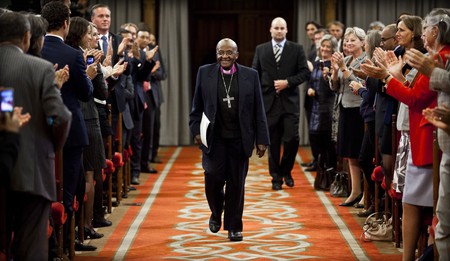 Two years after receiving the Novel Prize, Tutu was elected as the Archbishop of Cape Town. The position placed him at the head of South Africa’s Anglican Church – the first black African to serve in this position. Tutu continued unabated in his fight against apartheid, and although he avoided direct political affiliation, he’s credited alongside South Africa’s struggle stalwarts as one of the pivotal figures in the overthrow of the system. Four years after his appointment, Nelson Mandela was released from prison, and the government started dismantling laws pertaining to racial discrimination. 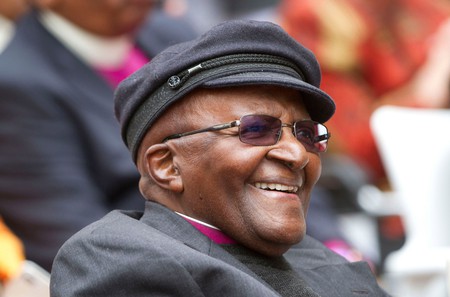 Following South Africa’s first multiracial, democratic elections in 1994, President Nelson Mandela appointed Tutu to chair the country’s Truth and Reconciliation Commission (TRC). The commission was set up to investigate the human-rights violations that took place under apartheid. This restorative justice process allowed victims to share their stories of violence and oppression. Many of these hearings took place in public, and Tutu used his role to counsel victims and perpetrators and urged forgiveness rather than vengeance. During this time, video footage of Tutu openly weeping with TRC participants spread across the world. 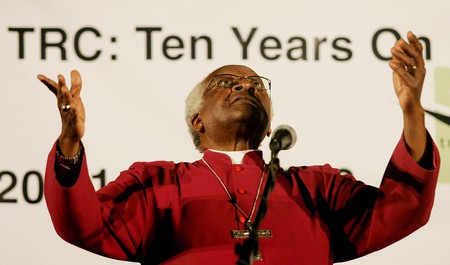 Mandatory Credit: Photo by Obed Zilwa/AP/REX/Shutterstock (6692847a) Desmond Tutu Former Truth And Reconciliation Commissioner Archbishop Emeritus Desmond Tutu, during a public debate on the legacy of the TRC. in Cape Town, South Africa. Tutu has questioned, why it took so long for South African prosecutors to charge former members of the apartheid-era security forces for the 1983 murder of an activist South Africa Apartheid Murders, Cape Town, South Africa | © Obed Zilwa/AP/REX/Shutterstock

Retires from the church, and then public life

Desmond Tutu officially retired from his position in the Anglican Church in 1996, and went on to establish the Desmond Tutu Peace Trust. In July 2010, Tutu went on to announce he would be no longer be actively involved in, or available for, various public activities – essentially, he was retiring from public life.

Though no longer the archbishop, and officially retired from public life, he continued to be outspoken about local and global injustices, including those seemingly in contradiction to the church, such as same-sex marriage. He famously referred to the oppression of homosexuals as the “new apartheid“. 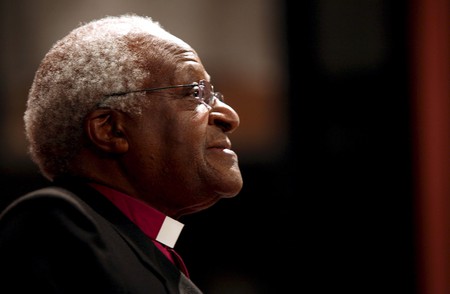