The Best Bars in Cape Town 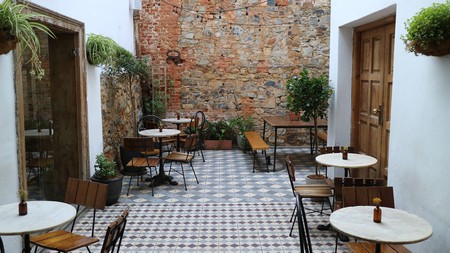 Cape Town isn’t short of brilliant bars, with low-key dives and high-end haunts. From Wale Street to Woodstock, these are the best places for a drink in the city, as recommended by a local insider .

There are bars in Cape Town to suit most tastes and budgets. Some will happily serve up a cheap pint or a traditional cocktail; others take the opposite approach, only pouring craft beers or shaking up a cocktail using top-shelf liquor.

Of course, picking out which one to visit while in the city depends on personal preferences, but if anyone knows a thing or two about Cape Town’s best bars it’s Murray Slater.

Slater has built, managed and owned bars in the United Kingdom and South Africa for more than a decade. These days he fills most of his time with Fermented, a community of professional and novice fermenters looking to hone their techniques while producing everything from wine, beer and distillation through to kimchi, kombucha and sourdough. Here’s his list of top picks for a perfect tipple in Cape Town. 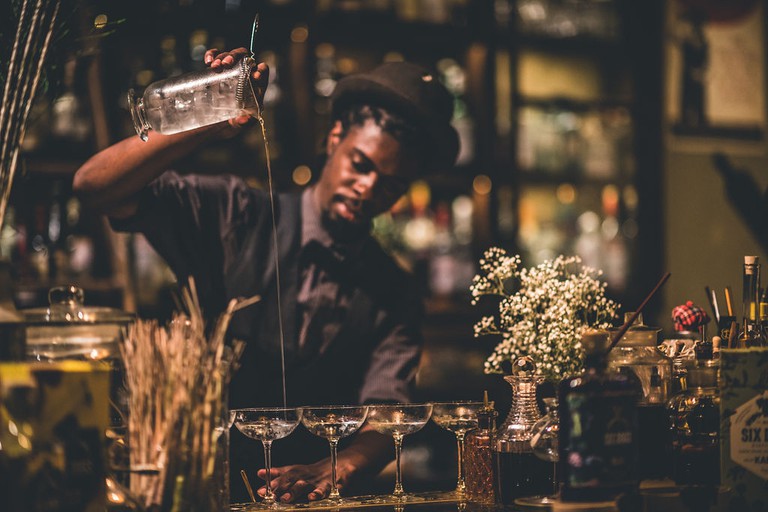 Finding this carefully choreographed speakeasy bar is part of the fun, with the exact address only disclosed to patrons after booking. Find the city’s best high-end cocktails in carefully considered surroundings. It’s located behind the popular Truth Coffee shop and offers late night jazz and light snacks. “The venue will transport you into a different time,” says Slater, “While Brent Perremore – the don of mixed drinks – will take you to the heavens with his creations.”

Vicious Virgin is a relatively new bar in Cape Town located on historic Wale Street, in the centre of the city. They make light meals and serve a good cup of coffee, but according to Slater the after-dark cocktails are what truly set this spot apart. “It’s a Tiki bar with a tropical vibe,” he says. “They specialise in rum-based cocktails inspired by Polynesian Mythology.”

This unassuming bar on a dusty street a few doors down from the famous Fugard Theatre could easily mistaken for a downtown dive. But owner Wayne Keet has poured hundreds of hours into building one of the city’s most unique bars. “When you walk through the swinging saloon doors you could be forgiven for believing you’re in a Hollywood Western production,” Slater says.

Award-winning wines abound in the Western Cape, and most restaurants and bars serve up curated selections of the local tipple. According to Slater, though, Openwine should be any wine connoisseur’s first stop in the city. “It’s Cape Town’s best wine repository,” he says. “Sample the best wines from around the Western Cape in a relaxed, uncomplicated and unpretentious atmosphere.” 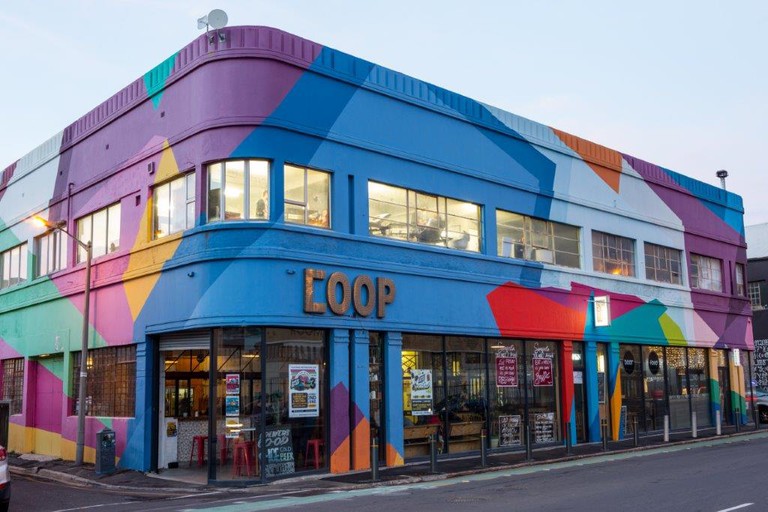 Courtesy of The Brewers Co-op
This laid-back bar, located on a busy road in the heart of Woodstock is a beer enthusiast’s haven. “The Brewers Co-op really is a one-of-a-kind brewery and tap room,” say Slater. Around the back, they offer microbrewers the opportunity to hone their craft, while up front, the public can sample a huge range of truly independent beers on tap. “There are 16 brewers, 16 taps and multiple beer enthusiasts collaborating on one premises.”

Finding a truly memorable cocktail in the heart of the tourist-centric V&A Waterfront was not always an easy task, but the arrival of the Cause Effect Cocktail Kitchen and Cape Brandy Bar has changed this. “It’s a vibrant and creative bar in the well trodden V&A Waterfront,” says Slater. “They serve cocktails that will blow you away with concept and flavour delivery, and have the best selection of local pot-still brandies that will have even the French listening.” 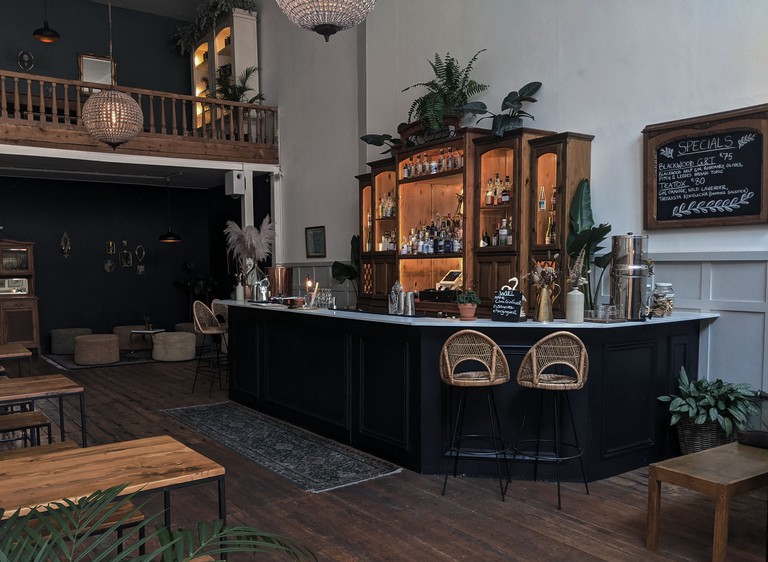 Courtesy of The Gin Bar

Most locals know the Gin Bar as “that secret gin bar” thanks to its unique location in the courtyard behind a chocolate shop on Cape Town’s Wale Street. It may since have grown to be the city’s worst-kept secret, but they’ve still managed to remain true to their core values of mixing the best gin cocktails in enticing surrounds.“It’s now well-known and established as the best place to enjoy distilled juniper treats in a courtyard that could be in an old Mediterranean village,” says Slater. 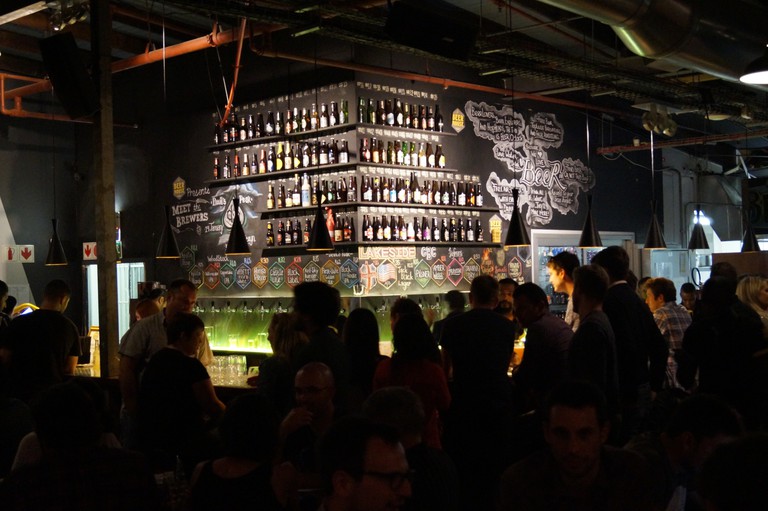 Beer has become big business in Cape Town and Beerhouse on Long Street has cemented itself as the best place to sample everything from unusual microbrews to major imports. “It’s a buzzing mecca of beer in Mother City,” says Slater. “They have 99 bottles of beer on the wall and a beer-inspired food menu.” According to Slater, the crowd is also a big drawcard at Beerhouse. “There’s a great mix of locals and tourists partying the night away, in the heart of Long Street.”

The Silo Hotel is Cape Town’s most lavish hotel and the Willaston Bar inside doesn’t disappoint either. For Slater, a visit there is as much about the surroundings as it is the drinks available. “They offer sophisticated mixed drink and wine imbibing, surrounded by incredible views of Table Mountain and Table Bay from above the top of an old grain silo.”

Few bars in Cape Town have stood the test of time like Asoka on Kloof Street. It’s a natural inclusion on many visitors’ lists thanks to the bar’s unique setting in a Victorian-era townhouse and with the memorable centrepiece olive tree in the middle. Although often a divisive destination for local Capetonians, there’s no denying their cocktails are among the best in the city. Their snacks and meals are a good companion to the drinks, whilst the live jazz provides the perfect background music.