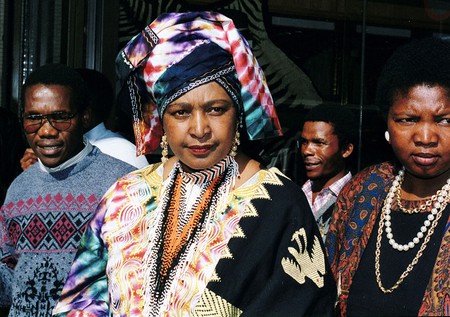 South African hero Winnie Madikizela-Mandela was one of the key figures during the fight against apartheid. She died on April 2 in a Johannesburg hospital at age 81. These are some of the defining moments for the woman known by many as the Mother of the Nation.

Trained to be a social worker

Winnie Madikizela-Mandela was born in 1936 in what is now the Eastern Cape Province of South Africa. She traveled to Johannesburg in 1953 and enrolled in a social work school, where she finished at the top of her class. Madikizela-Mandela’s decision to study social work came from a desire to make an impact on the community that surrounded her. She did so well in the class that she was offered a scholarship to the United States.

Though in 1953 she had the option to leave South Africa and study further in the United States, she decided to stay in Johannesburg and create change from within. She quickly became involved in the fight against apartheid, and married Nelson Mandela just five years later, on June 14, 1958. She became the mother of two daughters, Zenani (born in 1958) and Zindziwa (born in 1960).

In 1958, Madikizela-Mandela joined a mass action women’s march in Johannesburg, organized by other female struggle stalwarts Albertina Sisulu and Lilian Ngoyi. During the protest, which was deemed illegal by the apartheid government, police arrested Madikizela-Mandela along with 1,000 women. She went to jail and declined posting bail for two weeks as a sign of protest. This was to be the first of many periods of incarceration for Madikizela-Mandela during her ongoing fight against the apartheid government, and a defining moment that showcased the strength of the women in the movement. 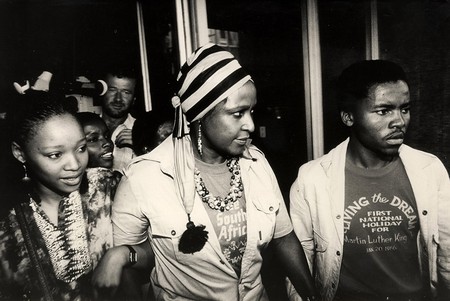 The arrest of her husband Nelson Mandela in 1962 threw the family—and country—into turmoil. This arrest, incarceration, and the subsequent Rivonia Treason Trial of Nelson Mandela and several co-accused separated Madikizela-Mandela permanently from her husband. She was left alone, with two young children, to maintain her household and ensure the name of her husband was not forgotten.

Madikizela-Mandela faced her first banning order by the apartheid government in 1962. This banning order confined her to the magisterial district of Johannesburg, prohibited her from entering learning institutions, and barred her from addressing any kind of gathering. Under apartheid laws, banning orders also made it illegal for media outlets to quote certain figures, essentially silencing the most important political voices in the country.

Madikizela-Mandela faced a second and more severe banning order in 1965 that prohibited her from leaving her neighborhood of Orlando West. The order meant she had to give up her job as a social worker, and she struggled to find a meaningful source of income due to pressure by apartheid police. In spite of the strict banning order and increased pressure, Madikizela-Mandela continued to rally support for political prisoners. In 1969, police raided Madikizela-Mandela’s home and arrested her under the 1967 Terrorism Act.

After the arrest, Madikizela-Mandela served 13 months in solitary confinement. She was confined to a concrete cell lit permanently by an electric lightbulb, with little more than a sanitary bucket, blanket, mug, and water bottle. For much of the first year, she had no meaningful human contact and faced constant torture and interrogation. Eventually, apartheid police managed to break Madikizela-Mandela’s silence by torturing another prisoner in an adjacent cell when she refused to talk.

After Madikizela-Mandela’s release 17 months later, she returned to the fight against apartheid. While political prisoners took on the intellectual battle, Madikizela-Mandela found herself at the forefront of the battle. In spite of constant harassment, Mandela cemented her reputation as a fearless icon who could not be intimidated.

In May 1976, weeks before the famous Soweto student uprising, Madikizela-Mandela, together with Dr. Nthatho Motlana, founded the Soweto Parents’ Association. During the weeks following the uprising, Mandela worked tirelessly to help parents and their children affected by the event. Apartheid police used her involvement to position her as a scapegoat for the violence, and imprisoned her once again.

Upon her release, Madikizela-Mandela returned to Johannesburg to find it had changed drastically. Oliver Tambo’s call from exile to make the country ungovernable had started to take effect, and by 1986, Johannesburg, in particular, was a dangerous place to live. The social worker in Madikizela-Mandela sprung into action, and she established the Mandela United Football Club in order to help guide disenfranchised youth. Even so, the impact of the apartheid structures began to weigh heavily on her, and years at the coalface of the struggle had hardened her character.

After an infamous speech in Munsieville in 1986, the public perception of Winnie Madikizela-Mandela started to shift. In many ways broken and militarised by the struggle, she allegedly called for the liberation of the country by means of necklacing—executions carried out with a burning tire placed around the victim’s neck. Though she later said she was quoted out of context, the claims did immense damage to her public perception. And in May 1991, as the fight against apartheid came to a head, she was convicted of kidnapping and being an accessory to the assault of 14-year-old activist Stompie Seipei and three others.

Winnie Madikizela-Mandela fought fiercely against apartheid and worked tirelessly to keep hope and belief in her husband and other political prisoners. In spite of the immense toll that the struggle took on Madikizela-Mandela and her personal life, she walked hand-in-hand with her husband when he was freed from jail in 1990. She remained married to Nelson until 1996, but during the transition to democracy, had frequent falling-outs with the African National Congress.

Her subsequent years during and after the transition to democracy were fuelled with controversy, including accusations of fraud and theft and failing to disclose donations. Nevertheless, Mandela maintained a fiercely loyal following, and she slowly regained respect from leading structures within the ruling party. Despite her criminal record and the controversy that surrounded her post-apartheid, she became a member of parliament during South Africa’s 2009 general elections.

Madikizela-Mandela maintained a strong presence in the country right up until her death. She occupied the position of head of the ANC Women’s League twice, and famously appeared beside firebrand political leader Julius Malema during his hate speech trial. Her later years were punctuated by hospital visits, but even so, her death on April 2, 2018 took much of the country by surprise, as many still grapple with the legacy of the prominent, enigmatic anti-apartheid icon.