12 Fascinating Things To Know About Seychelles 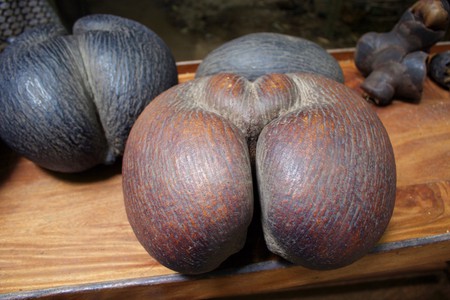 There’s lots you already know about Seychelles – it has beautiful beaches, the weather is warm all year round and Will and Kate had their honeymoon there. But here are some fascinating facts you probably didn’t know about the Seychelles.

Seychelles were once home to crocodiles

When settlers first arrived, one of the biggest problems they faced was an abundance of saltwater crocodiles. It’s thought they became extinct by around 1819, although there are still are reported sightings of them from time to time. 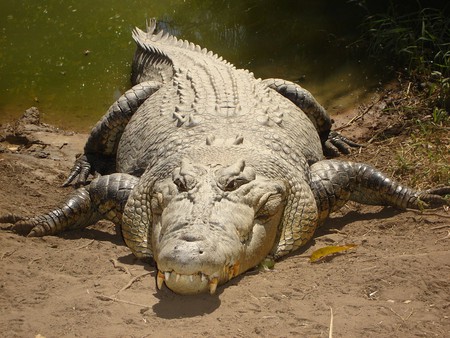 It is thought that the treasure of the French Pirate Olivier Levasseur, known as La Buse (the buzzard) is hidden on Mahe island. With a cryptograph from La Buse himself, pirate markings made in rock and even small amounts of treasure already being uncovered, there is more than just folklore surrounding this tale. One man on Mahe island has made it his life’s work to find it.

There are also several stories of other treasure being hidden around the islands too, including in Moyenne, but the story of the La Buse Treasure has more evidence than any others.

Okay, so maybe this is more a myth then a fact, but it’s a widely held belief that the tiny island of Moyenne is haunted. The most popular story is that there is a ghost there that is protecting buried treasure. But the British man who bought the island for just £10,000 in the 1960s told tales of many more ghosts inhabiting the island. 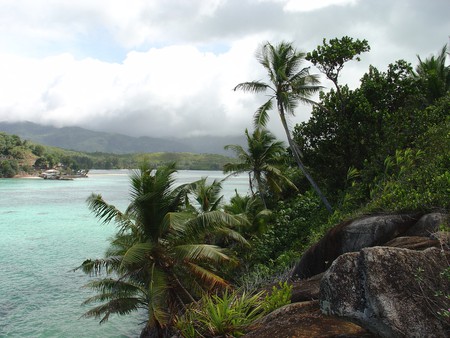 Curieuse was a leper colony

For over 100 years, from 1829 to 1965, Curieuse island functioned as a leper colony. The ruins of its history can still be seen today and the former doctor’s house has been preserved as a museum.

There are only 206 ‘natural’ UNESCO World Heritage Sites and Seychelles is home to two of them. The Vallée de Mai Nature Reserve and Aldabra Atoll (the world’s second largest coral atoll), both listed for their outstanding natural beauty. They are home to several endemic and endangered species, such as the giant tortoises. Both shouldn’t be missed on a trip to Seychelles. 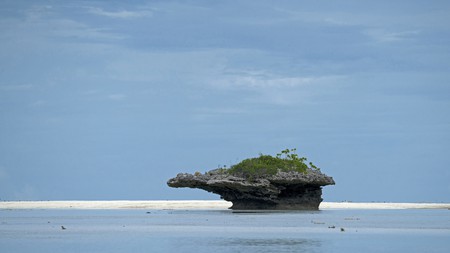 There are no indigenous people

The Seychelles was uninhabited until around 1770 when French settlers began to arrive with their African slaves. Before that, pirates had used the islands as bases and stopover points. Today, Seychellois are referred to as having a ‘melting pot’ of cultures, ranging from all over the world particularly Europe, Africa, and India.

Seychelles Is Over 99% water

The exclusive economic zone of the Seychelles is 1,374,000km2; of that, only 459km2 is landmass across all 115 islands, making it only 0.03% land. Most of the islands are uninhabited with 90% of the population living on Mahe island. The next two most populated islands are Praslin and La Digue. 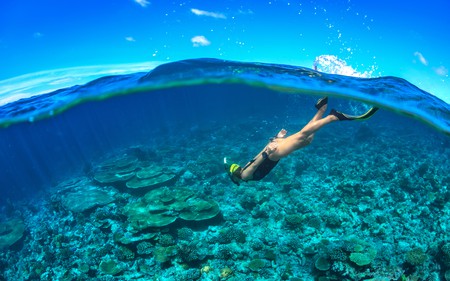 Over 99% water, dive in! | ©William Bradberry/Shutterstock

The famous clock tower is a replica of a replica

The clocktower in Victoria is often described as a little ‘Big Ben’. However, it’s actually a replica of another Big Ben replica in Westminster, London. It was brought here in 1903 to mark the Diamond Jubilee of Queen Victoria – at that time, the Seychelles was a British colony. 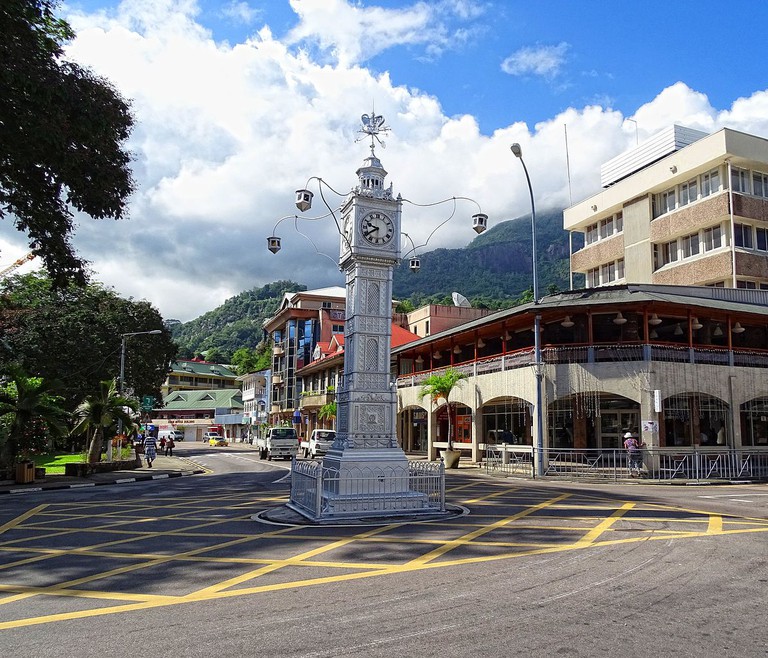 The Victoria Clocktower – a replica of a Replica! ©Bjørn Christian Tørrissen/Wikipedia

The local delicacy is fruitbat curry

Yes, really! While it is not as widely eaten as it once was, thanks to the wider availability of other meat, fruitbat is still eaten today as a traditional dish. If you want to discover where to find it and how to eat it, read our article on how to eat bat 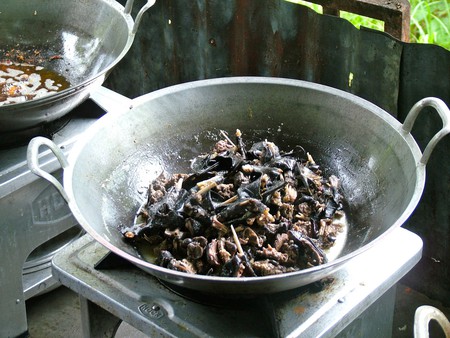 The flag has only been used since 1996

Since its independence from Britain in 1976, there have been three different flags. It wasn’t until 1996 that the current national flag has been used. Each of the colours have different meanings: the blue symbolises the sky and the ocean; the yellow for the sun; the red for the people and their determination to move forward; the white for social justice and harmony, and the green for the land and natural environment. 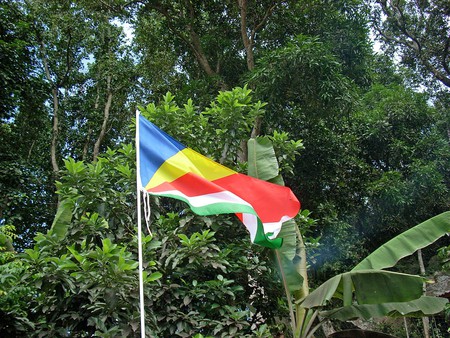 The current president was not voted in

The general election in 2016 saw ‘Parti Lepep’ (the People’s Party) win, but without a majority. Parti Lepep has ruled since the coup d’état in 1977, and it won a majority in every election since. The leader, James Michel ran, controversially, but once victory was secured, he handed over to his vice president Danny Faure. He has also stated that he will not be running for leadership of the party for the next election, leading to speculation that he will create his own political party.

The biggest nut in the world

The Coco de Mer is the largest nut in the world, thought to weigh up to 20kg and is from the Coco de Mer palms. The palm trees themselves can grow up to 30m high.

The biggest tortoise in the world

Esmeralda, who is actually male, is the world’s largest tortoise at almost 300kg. He is an Aldabra Giant Tortoise, indigenous to Seychelles. At 170 years old, he is also thought to be the second oldest tortoise in the world. If you want to meet him, he lives on Bird Island, a private island with an eco-friendly resort, Bird Island Lodge. 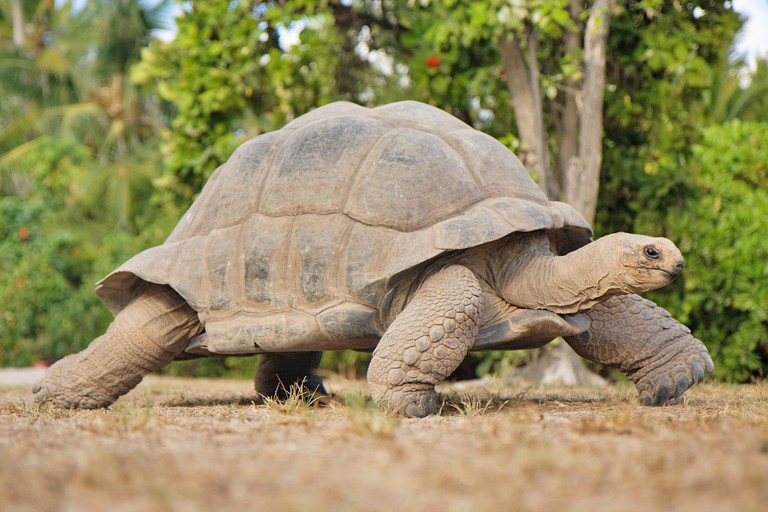