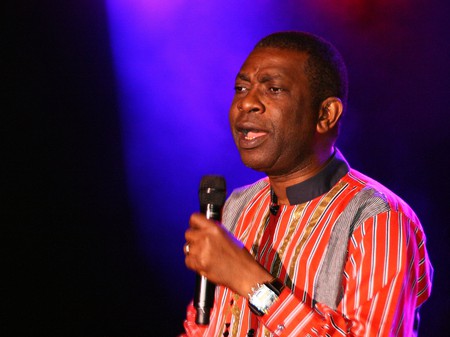 Youssou N’Dour’s surprising decision to put a halt to his musical career and enter politics in his native Senegal has been met with some bewilderment, but as one of the most popular singers in Africa, and an icon in his native Senegal, his potential support is second to none.

Raised in the slums of Dakar, where his father worked as a car mechanic, Youssou N’Dour took to music early, beginning his performing career at the age of twelve. N’Dour found inspiration in the diverse cultural and ethnic traditions which co-exist within Senegal. He identifies himself as a ‘modern griot’ which gives some indication of the particular mixture of tradition and modernity in which he immersed himself as a young man. When he began to write and record his own music he developed an inimitable style which drew on the Serer music of Njuup; this new style came to be known as Mbalax.

Using this idiosyncratic mixture of West African musical traditions as the basis for his work N’Dour went on to massive acclaim and popularity throughout Africa. He is widely recognised as one of the most influential recording artists in the world and as a pioneering figure in the rise in popularity and renown of West African music. His recent decision to enter the political field comes as something of an unwelcome surprise for Senegal’s political elite, who fear the destabilising potential of his popular support. In Senegal his influence already spreads far beyond the realm of popular music; N’Dour has his own TV channel and is known to be an astute businessman who has successfully invested in various industries, something which will no doubt work in his favour in the political sphere.

N’Dour’s purported reason for entering this sphere is to address the gross inequality in the country. As N’Dour said to a rally in Dakar: ‘For me, there are two Senegals. The Senegal of the have-nots and Senegal of the haves. My concern is the Senegal of the have-nots’. He is clearly not afraid of shaking up the political order in Senegal and, although he has not made his exact political ambitions clear, N’Dour is conceivably a rival to the Senegalese President Abdoulaye Wade, who has been in power since 2000 and is hinting at staying on for an unprecedented third term. N’Dour could potentially muster enough popular support to rival Wade and if he does then he has the ability to shake up the political establishment in Senegal for good.