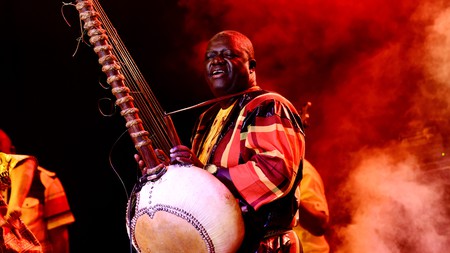 Saint-Louis is known for its colonial history and unique island setting, but over the past three decades the city has become synonymous with jazz. Welcoming a myriad of global stars, festival-goers, nationalities, languages and cultures, the Saint-Louis Jazz festival is the largest in Africa.

According to local lawyer and president of the Saint-Louis Jazz Festival, Ibrahima Diop, the festival started out in 1993 as “a way of developing tourism during the off-season, a way of showing tourists the history of this old colonial town, as well as its culture and local colour”. Fast-forward 27 years and the festival is a firm fixture on the international jazz scene.

The festival bills itself as the “most beautiful jazz festival in the most beautiful city in Senegal” and it’s hard to find fault with that assessment. Its stage is the former capital of French West Africa: a historic island-city and UNESCO World Heritage site filled with colourful colonial architecture and surrounded by the Senegal River estuary. The festival vibe spreads across the city with live events taking place in bars, galleries, cafés and hotels. Its musicians come from across the globe, bringing their unique rhythms, languages and cultures to the ears and eyes of tourists and locals. It’s a festival that embodies the spirit of the city like no other.

Since the inaugural festival in 1993, more than 250 global musicians have graced its main stage on Place Faidherbe. From African musical royalty, such as Ali Farka Touré and Femi Kuti, to American jazz legends, like Marcus Miller and Elvin Jones of The John Coltrane Quartet, the Saint-Louis Jazz festival has hosted some of the world’s best blues and jazz performers. But, if the festival were to have a prodigal son, it would be legendary jazz pianist Randy Weston.

Weston’s style blended African folk with American blues and he frequently claimed that his ancestral African heritage inspired his rhythms and creativity. He played Saint-Louis on a number of occasions and for Diop, Weston holds particular significance for the festival. “I love all the musicians who come, but Randy Weston was special. He helped magnify the festival. He visited daaras (Senegalese Quranic schools) and he even ate thieboudienne (Senegal’s national dish) for his breakfast”. A tribute for Weston, who died in 2018, will take place at the rescheduled 2020 edition of the festival in May 2021.

More than just the music

At its core, the festival is a celebration of music, art and culture, but few festivals have as wide-reaching an impact as Saint-Louis. Alongside the global names, the festival shines a spotlight on young Senegalese and African artists, not only introducing them to a new foreign audience, but providing a meeting hub for like-minded musicians in the various jam sessions, workshops, masterclasses and concerts.

The festival promotes equality – in 2017, there were more female artists than male – and also provides tangible economic and cultural opportunities to the local population. “The festival prices are low. Locals can watch great musicians like Marcus Miller, who performed in 2017, for an extremely affordable price,” says Diop. In addition, “the festival benefits the whole economy of Saint-Louis. All the hotels are full. The peanut sellers are happy. Traders and piroguiers (canoe operators) are more active.”

The festival may last for just six days a year, but the impact is felt year-round and Diop hopes it stays that way. Currently, the festival is made possible by donations from sponsors, such as the bank BICIS (“it gave 200,000 CFA (£277) in 1993 and 20m CFA (£27,725) today. It is extremely loyal”) and the Grand Duke of Luxembourg who “is a great friend of Senegal. The Luxembourg government finances the festival stage and all the equipment”. Yet, Diop believes there is a “need to create a foundation for Saint-Louis Jazz to make it easier to access funding and ensure the festival becomes permanent”.

Given the festival is now anchored in the city’s psyche, it would be a tragedy if that were not the case.

The festival usually takes place between April and May, and visitors shouldn’t wait to book accommodation as hotels and guesthouses on the island are snapped up well in advance.

Saint-Louis is 300km (186mi) north of Dakar and easily accessible by car, taxi, sept-places (mini-bus) or bus. The drive takes about four hours on a good day, but can take double that on the Friday and Sunday of the festival when the Dakar weekend crowd makes the journey. For those who are not in a rush, it’s a great opportunity to break up the journey along the Grande Cȏte.

The music is not confined to the main stage, with lots of small events taking place in bars, hotels and galleries across the city. These small events kick off around 1pm and are free of charge. The headline musicians play the main stage on Place Faidherbe. The event starts at 8pm each evening and you need to buy tickets, which range from Zone B day tickets (£6.50) to week-long VIP tickets (£87).

One of the joys of Saint-Louis Jazz Festival is the incredible setting. In the day, visitors can walk around the historic old town, soak up the rays at Hydrobase Beach, take a pirogue to the Langue de Barbarie national park or birdwatch at the Djoudj National Bird Sanctuary, and be back in time for a bop in the evening.