The life of the Senegalese musician Baba Maal resembles a collage, where different stories of history, geography, culture and the politics of Senegal are assembled to create the narrative of one of the most important West African artists. This article tells five stories about Baba Maal that place his work as an African musician in Senegal’s socio-political context. 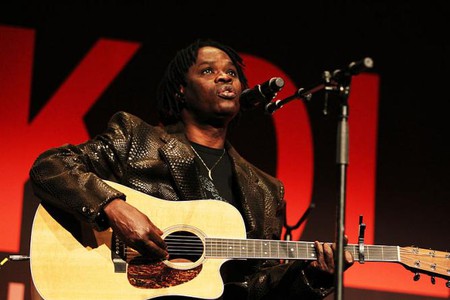 A Portrait of the Artist as a Young Man

In 1953, seven years prior to Senegal’s independence, Baba Maal was born to a family of peasants in the small town of Podor, on the river of Senegal. He inherited a social status in the Senegalese hierarchy. Prior to occupation, the society in Senegal was divided into three categories: the ger, who were the free men who constituted the political aristocracy, the neno who were artisans and the jam, who were slaves. Membership to any of those categories was inherited, which made social mobility very difficult or almost impossible.

Griots – used to refer to singers who praised the kings and received presents in return – were part of the neno. This privilege made music and praise-singing an exclusive monopoly for griot families. During the French colonization, the power dynamics in Senegal were altered. This was evident in cities where griots were deprived of their political patrons. However, in rural areas like Podor, griots were less affected by the political change and kept their job. Born to a peasant family in rural Podor, Maal was not expected or allowed to become a musician.

Maal’s mother taught him the women’s music of Yela. The beats mimic the sound of pounding grains. Originally, women used to sing songs and afterwards, men brought the music and composed songs about the history of villages. Maal was influenced by his mother’s teachings, which were reflected in his profile later on.

Schools in Senegal were introduced by the French occupation and aimed towards training future colonial agents. After the independence, formal education was used to eradicate social hierarchy in Senegal and musical education became accessible to students from all social classes. This was when theÉcole des Beaux Arts in Dakar was founded in 1960, where Maal commenced his undergraduate studies in music. Aware of the modern nature of university education, Maal complemented his education with a traditional learning journey with the griot Mansour Seck and together, they toured West African villages singing and learning more about local culture and songs.

Until this time, the older generation in Senegal was not accustomed to the social changes brought by independence and modernization, and Westernized Senegalese musicians were regarded as drug and alcohol users. Maal’s traditional learning journey with Seck granted them both wide recognition and respect in Senegal. Maal says that his father didn’t acknowledge him as a singer until he listened to him singing on the radio. Though singing was traditionally exclusive to griot families, Maal succeeded in changing tradition in ‘traditional’ ways.

The exposure to local music was followed by exposore to global music in Paris, where Maal was granted a scholarship at the Conservatoire. Maal realized that the roots of Cuban Salsa and Rhumba, the Jamaican reggae, and American soul music are African. The African diaspora added new tastes to the traditional African music. Realizing this pattern, Maal got inspired to reinvent the Yela. He mixed the traditional African rhythms with different instruments, dances and languages to suit both youngsters in Senegal and the global audience.

Maal returned to Senegal and formed a musical group called Daande Lenol (the voice of people). In contrast to the old griot tradition of praising kings, Maal believes that his role is to use music to tell what is expected from their leaders. Becoming an ambassador for Oxfam, Maal led a campaign to support West Africans in the food crisis in Sahel in 2012. At the same time, he started a petition on Avaaz to appeal to the world’s leading countries for help. His activism extends to the African leaders, who promised in 2003 to spend 10% of their national budget on agriculture, but such promises were never fulfilled. In 2013, Maal released a very short songto remind them of their duty.