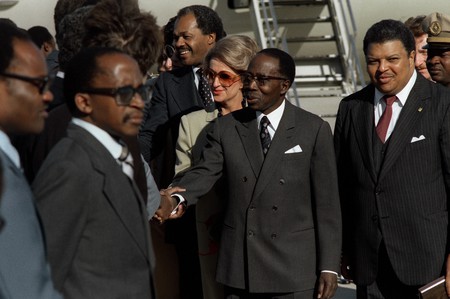 President Senghor arriving in the United States in 1980 | © Unknown / WikiCommons

Senegal’s first President, Léopold Sedar Senghor, is considered one of the most influential Africans of the 20th century. As a poet, Senghor championed black identity through his literary works, and as a politician, he showed that democracy and stability was achievable in post-colonial Africa. Here’s your need-to-know guide.

Léopold Sedar Senghor was born in the small coastal town of Joal in 1906. The son of a prosperous Christian landowner, Senghor was raised as a Roman Catholic, attending a boarding school run by French missionaries before moving to Dakar in 1922 to train as a priest. Deemed unsuitable for the priesthood due to his African heritage, Senghor gained a place at the French lycée in Dakar, where his academic prowess was recognised with a scholarship to continue his studies in France. The young, gifted Senghor thus set off for Paris in 1928, beginning his “sixteen years of wandering”.

Léopold Sedar Senghor was not afraid of being a pioneer. In 1928, he became the first African to earn a French state scholarship to the Lycée Louis-le-Grand in Paris. Seven years later, he chalked off another achievement as the first African to obtain an ‘Agrégation’ degree (equivalent of a PhD) in French grammar.

During his studies, Senghor moved in literary and intellectual circles in Paris, sharing ideas on linguistics, politics and poetry with future French presidents (Georges Pompidou, Socialist President 1969-1974) and celebrated authors (including Paul Guth and Henri Queffélec). However, it was his collaboration with fellow poets of African descent, Aimé Césaire and Léon Damas, that gave birth to an international movement négritude. 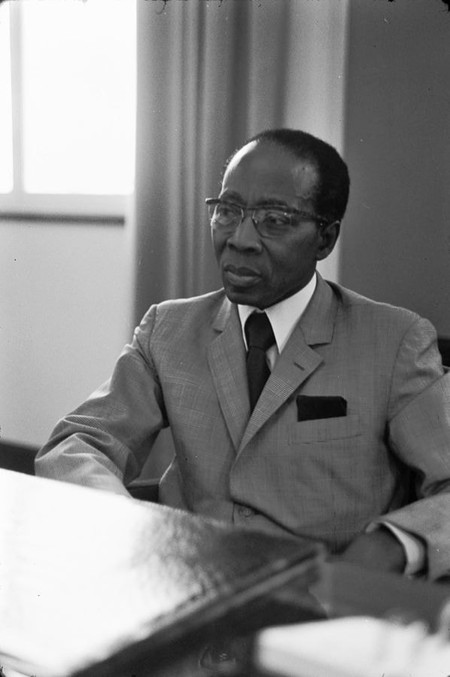 In his own words, Senghor described the negritude movement as “the sum of the cultural values of the black world as they are expressed in the life, the institutions, and the works of black men.”

Living in a French Empire rich in racism, the three poets used poetry (and later other literary tools) as a voice to celebrate black identity. Negritude was an assertion of distinctive African aesthetics and characteristics; a nostalgia for the traditions of the past and a champion of Pan-African values. Early works, such as Senghor’s Prière des Masks, were a prime example: highlighting the ancestral traditions of the African diaspora and calling on the “men of the dance” to “teach rhythm to the world”.

As such, the negritude movement acted as a soft rejection of colonial influence, raising black consciousness and rejecting the superiority of the ‘white man’. It changed the way the colonised felt about themselves and laid the foundations for independence.

Described as “anti-racist racism” by Jean-Paul Sartre, Senghor’s poetry was ‘pro-black,’ but not necessarily ‘anti-white’. An African nationalist, he did not reject European culture, but instead highlighted the differences between the two societies: the latter built out of separation and conflict, the former out of unity and rhythm.

Senghor believed rhythm to be instrumental to the African way of life. So much so that many of his poems are headed by the musical instruments he thought should accompany them. To New York, for example, was to be played with a jazz orchestra; in particular, a trumpet solo.

However, at the core of Senghor’s work was racial identity. From celebrating African traditionalism and culture to weaving Wolof and Serer into his poems, Senghor sought to inspire pride in the mother continent. In Femme Noire he depicts Senegal (Africa) as a ‘black woman’ that caressed and nurtured him. In one of his most famous poems, Dear White Brother (Poème à mon frère blanc), he settles the issue of ‘colour’:

Well then, of us two, who is the coloured one? 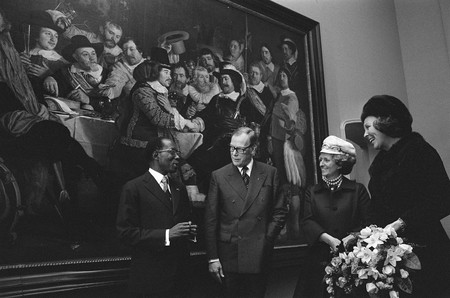 On a state visit to the Netherlands, 1974 | © Bert Verhoeff / WikiCommons

The ideals of negritude underpinned Senghor’s movement into the political realm. In 1945, the new constitution of the French Fourth Republic allowed for African representation in the French Assembly. Senghor was duly elected for Senegal-Mauritania – the same year he published his first collection of poems, Chants d’Ombres (‘Shadow Songs‘).

Three years later, Senghor co-founded the Senegalese Democratic Bloc which would go on to win the Senegalese elections and instil Senghor in the Assembly from his own Senegalese party (previously elected on the French section of the Workers International (SFIO ticket)). He also published Hosties Noires (‘Black Victims‘), a collection of poems written while a prisoner in World War II, which highlighted the treatment of colonial soldiers conscripted to all-African units in the French Army.

President Senghor arriving in the United States in 1980 | © Unknown / WikiCommons

A socialist, but not ridden with anti-Western ideology, Senghor maintained close ties with the ‘West’, which many believe laid the foundations for the country’s political stability – it remains one of the few African nations never to have had a coup. Meanwhile, after years of just one party, Senghor left Senegal with a multi-party system and fully-functioning elections; a democratic legacy where freedom of thought is valued.

Personally, Senghor inspired a country, a continent, a race. From Senegalese villager to Parisian intellectual, French Minister to Senegalese President, he epitomised what he preached: African self-determination. And, just because he was so proficient in doing so, he even bagged another ‘first’ in his retirement: first black man elected to the 16-member Académie Française in 1983. He died in 2001 aged 95.

Léopold Sédar Senghor stadium in Dakar, one of many buildings named after him across Senegal | © Jeff Attaway / Flickr
Give us feedback