The Best Places To Watch Sport in Dakar, Senegal 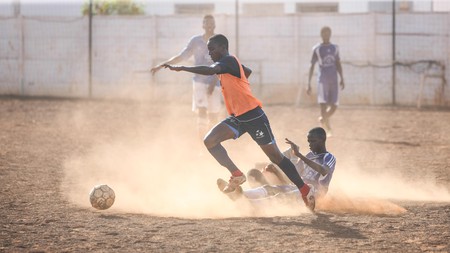 Senegal is sport-obsessed. Whether watching, playing or talking about it, sport is never far from Senegalese day-to-day life. However, finding a specific match on TV in Dakar can be tricky, so here’s a selection of the best places to watch sport in the city.

Dakar is the sporting hub of a sporting country. From promising youngsters at football academies and wrestling schools to locals exercising on the beaches and in the vast outdoor gyms, Dakar’s sporting prowess is seen all over the city. However, watching sport on TV can be harder than watching it live.

Football is the most-watched sport, and most Senegalese will support the national team alongside one of the top European sides. As such, televised clashes in the top leagues of England, France, Spain and Italy are easy to find, as well as Champions League matches.

Expat-owned bars may also show sports such as the Six Nations rugby and American-based leagues depending on the nationality of the owner and the clientele. In general, though, if it’s likely to be televised in France, it will likely be televised in Dakar. Many bars, hotels and restaurants with TVs have Canal+, so look up if a particular match is being shown on that channel before ringing ahead. 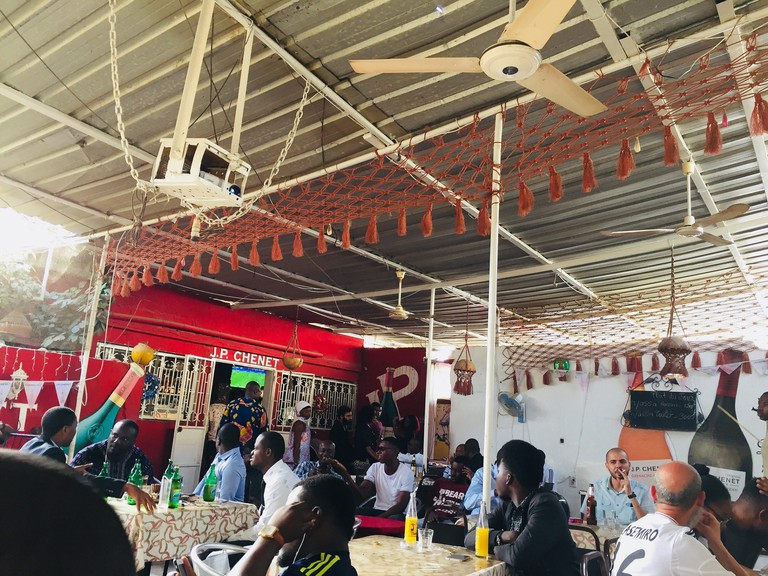 Xorbi may not have a beach or a rooftop, but it more than makes up for it with its sprawling enclosed courtyard filled with palm trees and fairy lights. In the heart of Fann Hock, Xorbi can easily be missed from its indiscernible exterior, but the inside is anything but. A rowdy bar jam-packed with a clientele from across the African continent, Xorbi is one of the best value places to drink and eat in large quantities. Dibi (Senegalese barbecue) can be ordered by the kilo, and beers are served in hefty 660ml (22 fl oz) bottles. Xorbi is also a hub for football and plays every big game on its two large projector screens. With loyalties split between Europe’s biggest teams, the latter stages of the Champions League are particularly raucous. 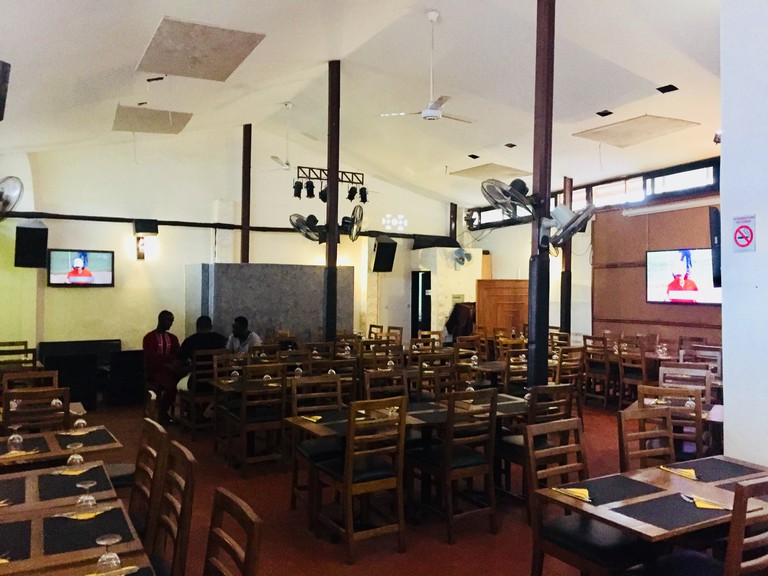 Bazoff clearly couldn’t decide whether to be a restaurant-bar or a bar-restaurant, so plumped for both. One room features a long, darkly lit bar with stools and stacked bottles; think the 3am New York bar scene in a B-list film. The other is a large, light dining area with wooden tables and chairs. The one thing that unites them: the big screens. This bar and restaurant off Avenue Bourguiba marries its wide selection of drinks with a menu that fits all wallets and palates (including vegetarian options). As such, Bazoff is a melting pot for students, professionals, expats and locals to come and get their sport fix on the six large screens, while it often hosts live music on weekend evenings. Bazoff also has a trump card if you’re trying to watch sport in the sweaty summer months: air con. 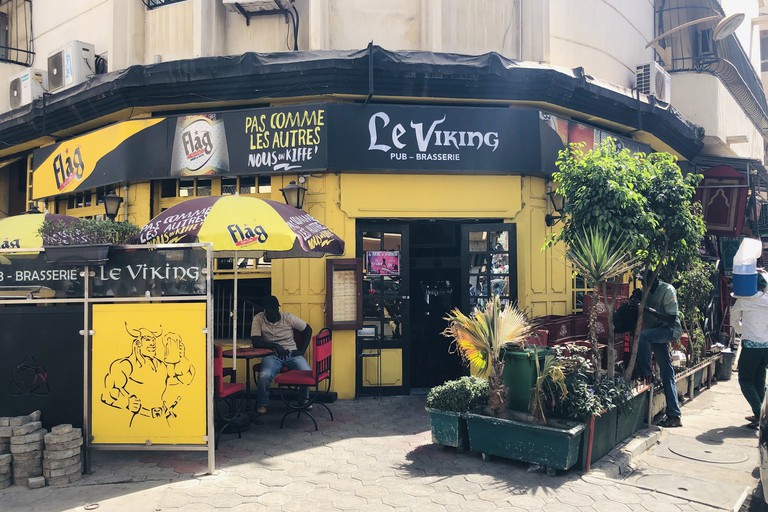 Le Viking is the closest thing to a pub in Dakar (although Chez Eric in N’gor runs a close second), and it’s a lively neighbourhood pub at that. Plum in the heart of downtown, a few minutes’ stroll from the Place de l’Indépendence, Le Viking is open late and serves cold. Split into two levels, the lower bar offers that dimly lit, late-night bar feel with karaoke being blared out late on weekend evenings, while live sport takes centre stage the rest of the time. For those wanting an escape from the screen, a second floor of high red-cushioned booths and African sculptures is found upstairs.

Tucked away in the backstreets of Sicap Karak, this compact and convivial bar is a real delight, welcoming a friendly local crowd into an airy enclosed patio. Seoul 2 is fairly inconspicuous from the outside – just look for the green Beaufort beer sign, which is often helpfully hidden by leaves. However, if football is on, the search is much easier. Inside, expect to share big tables and get caught up in compulsive whooping and hooping at any decision the referee makes. Due to its relatively small size, it’s worth getting here early if watching a popular game, while ordering some of its delicious African fare – think dibi (grilled meats), alloko (fried plantain) and attieké (manioc couscous) – can also take a long time to arrive. 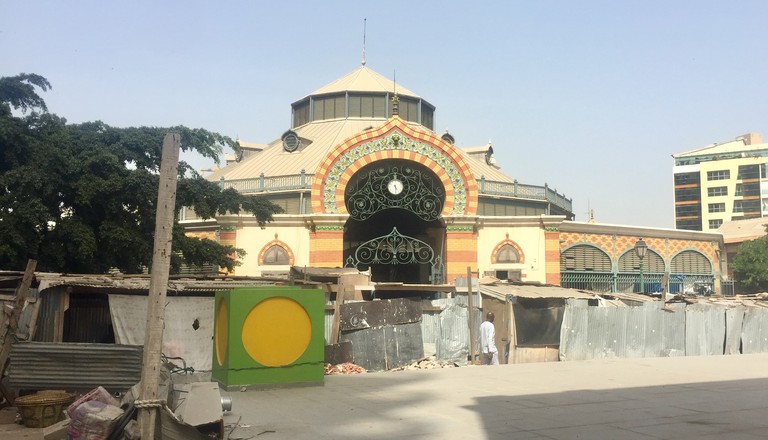 In downtown Plateau, next to Marché Kermel, this bar-restaurant claims to be the oldest bistro in Dakar. It fittingly offers unassuming, uncomplicated but very good French cuisine, with the lunchtime three-course menu a particular steal at just 7,500 West African CFA francs (£10). If coming in the evening, expect live music, karaoke and a changing happy hour, all in the comfort of an air-conditioned salon. But, it’s the sport we’re after, and Le Kermel is the place to go for HD. Showing football, handball and anything related to France, its large screen may not be the size of some of the projectors across town, but the quality takes some beating. 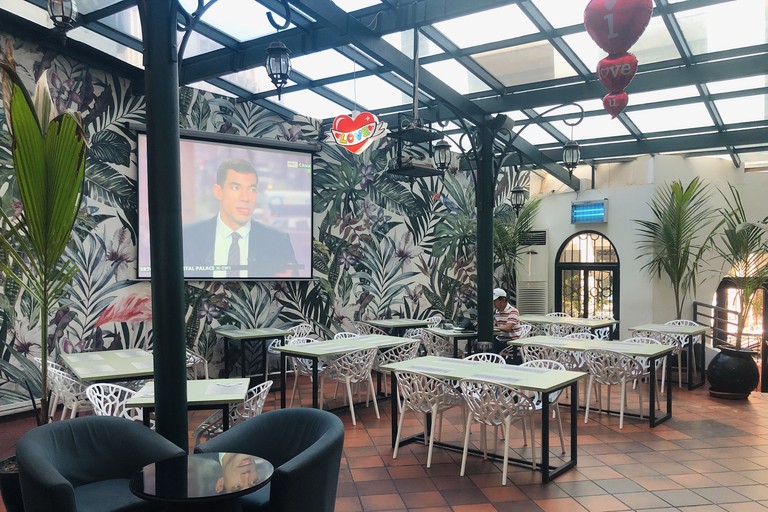 Café de Rome and ‘sports bar’ are not words expected to feature in the same phrase. The former is a hotel-casino-restaurant with white tablecloths, a gold brass-panelled bar and staff that wear bow ties. A sports bar is… well, not usually that. However, the restaurant bar has three TV screens etched into its panelling, giving those eating out the chance to watch volumeless sport (ideal for the compromise of watching sport on holiday or not). Then, passing through the restaurant, the lounge has a huge projector with comfy lobby-style tables and chairs for those who want to watch a game with some bar snacks and a gin and tonic. 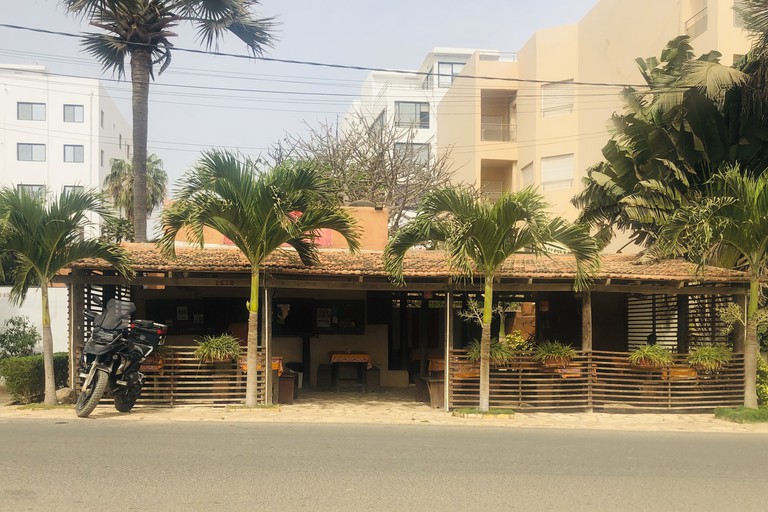 With its strip of restaurants and host of surfing spots, the Petite Corniche of Almadies is one the most popular places in Dakar. But, catching a game while out lounging can be tough. Secret Spot has a small TV that occasionally shows football. Surfers Paradise has a TV that occasionally works at all. Prainha, on the other hand, has a large TV with Canal+ hidden away in a small verdant courtyard. One of the few restaurants not overlooking the water, Prainha makes up for it with a unique menu – both savoury and sweet crêpes are the speciality – and a courtyard that is never full. 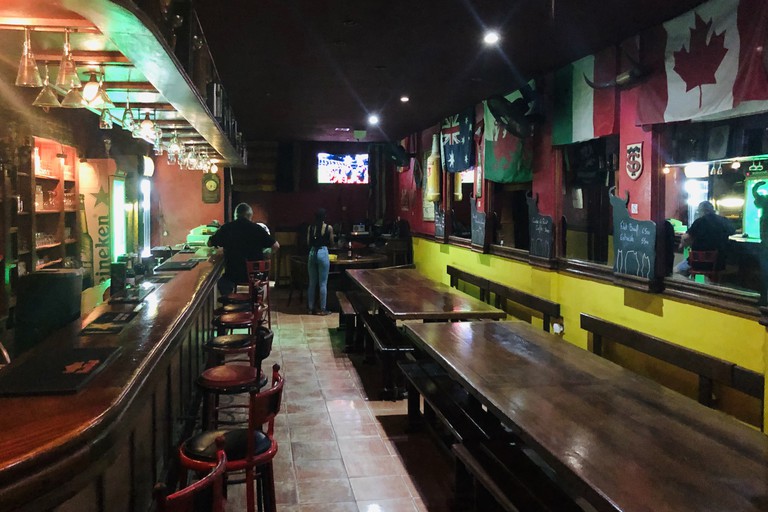 It’s hard to be ‘tucked away’ on one of Dakar’s busiest streets, but that’s exactly what Chez Eric accomplishes. Situated opposite the Stade d’Ngor on the Ngor-Virage road, Chez Eric’s black wooden saloon doors and nondescript exterior (besides the bull sign) hides this little French pub from view. Inside, a long wooden bar serves draught pints and a few craft beers, too (one of the only places in Dakar to do so). The kitchen offers great-value steaks and sandwiches, as well as plates like Spanish tortilla. The walls are bedecked in flags and memorabilia celebrating Toulouse, while the TV plays French league games, Champions League, rugby and boxing among others.