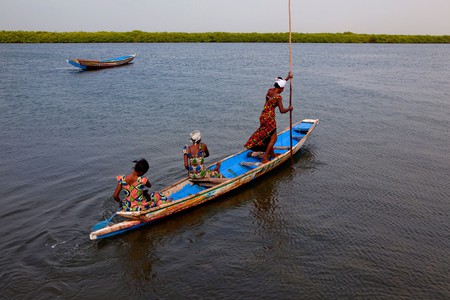 Formed by three rivers merging into the Atlantic, the Sine-Saloum Delta has more than 200 islands and islets | © In Pictures Ltd. / Corbis / Getty Images

A UNESCO World Heritage site, Senegal’s Sine-Saloum Delta is a watery wilderness of snaking rivers, mangrove forests and verdant islands between the Petite Côte and the Gambian border. 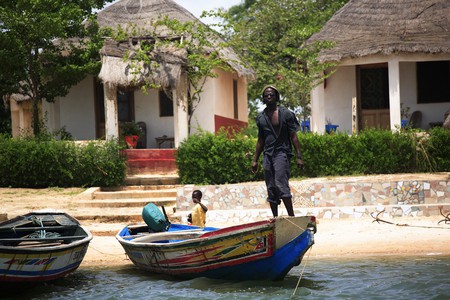 River deltas are synonymous with biodiversity. From the fluvial and marine to the terrestrial and avian, the varied topography supports an assembly of species that can only occur in their unique environments. But not all deltas are UNESCO World Heritage sites.

Recognised by UNESCO in 2011, Sine-Saloum is an eco-wonderland encompassing 180,000 hectares (444,790 acres) of raw natural beauty. The merging of not one but three rivers (Saloum, Diombos and Bandiala) into the Atlantic creates a remarkable biosphere of brackish creeks, deep mangrove forests, salt flats and open estuaries. More than 200 islands and islets are carved between dry savannahs and murky bolongs (saltwater canals). Throw in bustling villages, man-made shellfish mounds and large bird-nesting sites, and you start to get the picture: Sine-Saloum is not the average delta. 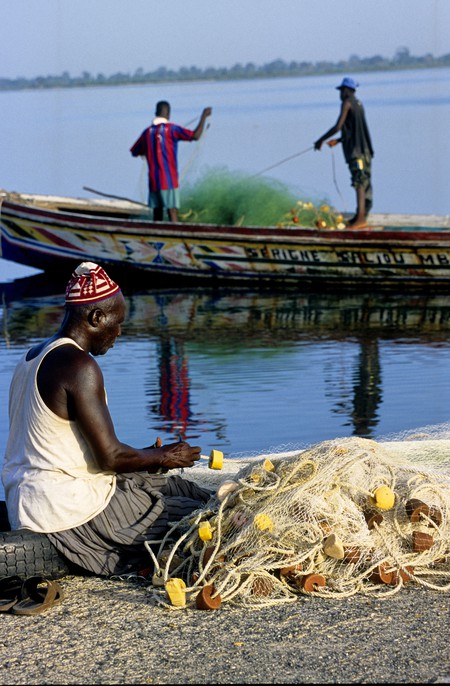 Fishermen like those in Foundiougne, a village on the banks of a bolong in the Sine-Saloum province, hunt out oysters, crabs and more | © Sylvain GRANDADAM / Gamma-Rapho / Getty Images

Sine-Saloum was one of the last surviving African kingdoms. Timelines in West Africa are not an exact science, but it’s estimated that the Serer people moved to the region in the 13th century, eventually forming the two kingdoms of Sine and Saloum. Although distinct, the two royal dynasties were intricately linked through shared culture and geography. They both welcomed other tribes that moved to their seeming drought- and famine-resistant lands. They both maintained their monarchies during the colonial period, and they only officially joined Senegal when both kings died in 1969 (nine years after Senegal achieved independence). However, the Serer were not the first people to thrive on these shores.

The delta is home to 218 man-made shellfish mounds – some hundreds of metres long – that date back nearly 2,500 years. Some were built as burial sites – with millennia-old artefacts found within – while others were created as tactical islands, forming managed waterways to aid fishing, irrigation and sustain human life.

Human endeavour is still evident today in the thriving villages and towns that dot the delta’s channels, but one of the biggest draws is the wildlife. From dolphins dancing by the shores to caiman lurking in the mangroves, the delta is an aquatic version of the savannah’s watering hole. Delta fishermen hunt out oysters, mussels and crabs, alongside 80 species of freshwater and saltwater fish, but they face fearsome competition from the air. More than 100 species of bird, including dwarf flamingoes and spoonbills, treat the delta as both home and restaurant, while the Île aux Oiseaux offers a maternity ward to upwards of 40,000 terns. During the winter months, the winged population swells, as travellers on the East Atlantic Flyway (from St Petersburg to Guinea-Bissau) treat the many islands as motels.

Wild inhabitants, such as monkeys and warthogs, roam the dry forests, but the easiest place to lay eyes on the larger land animals is the Réserve de Fathala. Buffalo, white rhino, giraffes, antelopes and the giant Derby eland roam its 21-square-kilometre (eight-square-mile) savannah, while the reserve even offers walks with lions. 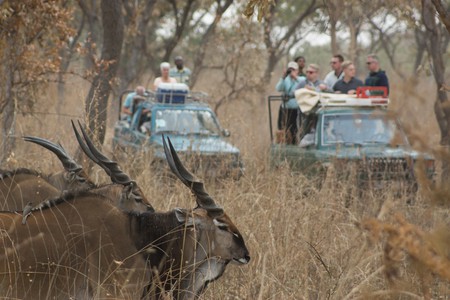 However, not going to see anything in particular can be the most rewarding. Heading out on a pirogue into the mazy wetlands – drifting between islets, sandbanks and colourful salt pools – is undoubtedly the best way to witness the sheer majesty of this adventure playground.

One of the largest delta towns, Palmarin is nestled between the Atlantic seaside and the Saloum estuary. Easy access (the roads are tarmacked), palm-tree-lined beaches and a range of accommodation options make Palmarin a great entry point to the delta’s delights. Organise an excursion into the delta with a local guide in the morning – taking in the village of Djiffer and sandbank Pointe de Sangomar upon return – and chill out on the beach in the afternoon. 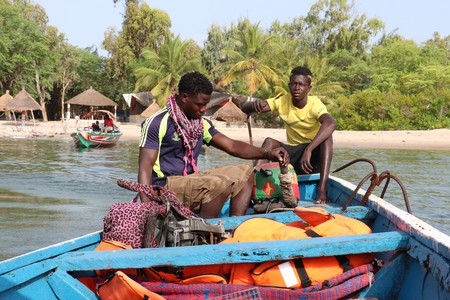 At 150sq km (60sq mi), Mar Lodj is one of the biggest of the delta’s 200 islands. Home to 5,000 people, scattered across four principal Serer villages, Mar Lodj provides the perfect introduction to life in Sine-Saloum. To get there, head to the creek town of Ndangane and take a 20-minute pirogue ride. Those wanting to stay for an evening can shack up at a basic campement, but don’t expect flushing toilets or electricity.

Foundiougne hugs the Saloum’s banks 45km (28mi) inland from its mouth at Djiffer. While it’s a small river town, it has thrived due to its location as an important ferry crossing between the northern and southern parts of the delta. With five trips a day, the 10-minute ferry ride across almost 1.5km (1mi) of water is worth the visit alone, even before reaching the quaint town of riverside accommodation and sailing boats. 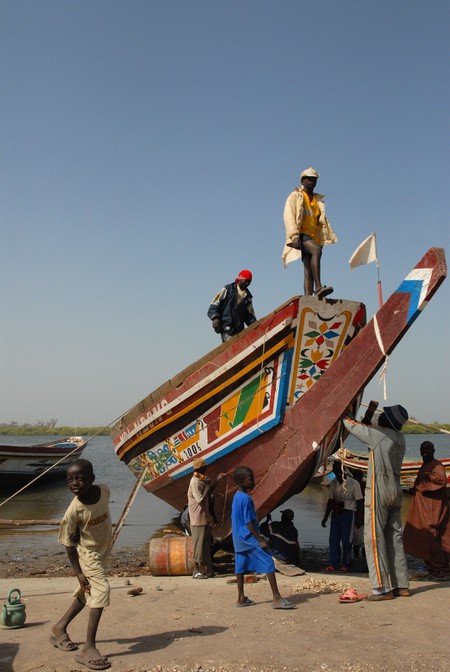 Many activities, such as pirogue trips and birdwatching, are available to visitors lodging in one of the villages along the delta | © Andia / Universal Images Group / Getty Images

If Sine-Saloum had a riviera, Toubacouta would be it. On the way down to Banjul, this charming little town occupies a serene stretch of the delta and is home to some of its smartest lodges. Even for those not staying, a cold drink on one of the decked riverside bars and hotels is hard to beat.

Lodges and getting around

Sine-Saloum encapsulates the Senegal tourism divide with accommodation ranging from five dollars to five stars. Luxury lodges, such as Keur Saloum in Toubacouta, offer spas and infinity pools overlooking the river. Eco-lodges – think treehouses and bungalows that blend into the natural environment – are often more secluded, with each occupying a stretch of the delta where nature is very much on the doorstep. For those wanting a ‘more authentic’ experience, basic accommodation – usually consisting of a mud hut – can be found in the smaller villages and islands.

Whether staying or passing through, all the lodges offer delta activities, such as pirogue trips, fishing, birdwatching and kayaking and sometimes bicycle hire. They are the easiest places from which to organise trips to local villages and excursions into the wilderness, as well arrange transport around the delta for those without their own set of wheels (public transport is understandably unreliable, and taxis are only found in the larger towns). 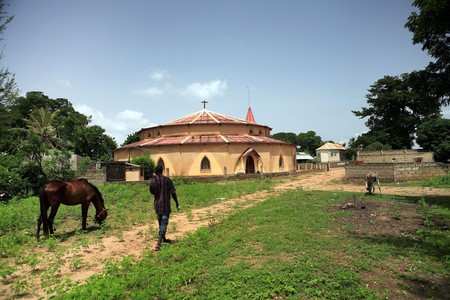