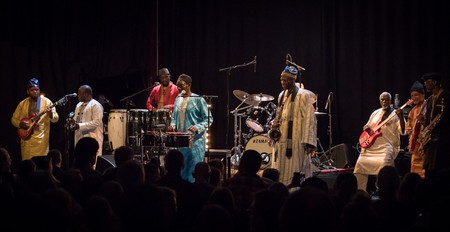 One of Senegal’s biggest and most beloved bands, Orchestra Baobab has been thrilling audiences with its distinctive Afro-Cuban rhythms for almost half a century.

A brief history: the ups and downs

Orchestra Baobab is the perfect name: a multi-piece extravaganza of instruments and musicians that is synonymous with Senegal and West Africa. The orchestral ensemble has been getting people’s feet tapping ever since they formed in 1970 as the house band of Dakar’s upmarket Baobab Club, from where their name derives.

The original seven-piece group hailed from across Senegal, Mali, Togo and Morocco, with their diversity not only influencing their music, but also broadening their appeal: Orchestra Baobab’s melodic rhythms reigned over Dakar’s music scene during the 1970s. At the point when the Baobab Club closed in 1979, they were Senegal’s biggest band, “commanding fees of about $4,500 for a single show”.

The 1980s, though, saw the rug whipped from underneath their feet by the increasing popularity of mbalax – the fast-paced Senegalese pop music pioneered by Youssou N’Dour – and in 1987 the group parted ways after 20 albums. Yet, as world music infiltrated western ears during the 1990s, they were persuaded to reform in 2001, and have been touring the globe and producing new music ever since.

The music: influence and style

Orchestra Baobab’s Afro-Cubano groove was spawned out of local heritage and colonial byproducts, with Cuban son (a blend of African and Spanish musical styles created in late 19th-century Cuba) stowing away on boats to West Africa and finding a home with local audiences. The sultry Latino soul of saxophone and guitar would underline the Baobab sound. Founding and current member Balla Sidibé told Rhythm Passport that “Cuban music had influenced us a lot because it was all around at the time – on the radio, at the club associations, weddings, baptisms and so on. You couldn’t escape from listening to it!”

Each member interpreted ‘Cubano’ differently, blending it with personal influences and the sounds of their ethnic traditions. From Wolof and Griot to Mandingo and Maninke, distinct heritages were woven into the tempos, melodies and drumbeats. The Malian tenor saxophonist Issa Cissokho brought a reggae-ska slant. Sidibé and Rudy Gomis incorporated Casamançaise folk and Portuguese creole. The Togolese guitarist Barthélemy Attiso was inspired by Santana and BB King, while saxophonist Thierno Koité revered Charlie Parker and John Coltrane. Their distinct interpretations inspired the Baobab sound. 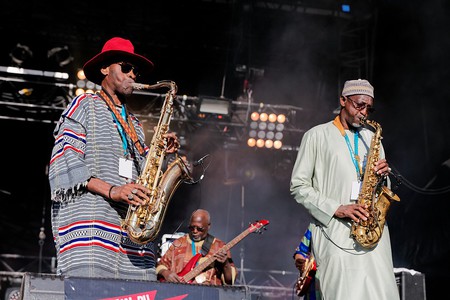 The music: the songs and albums

Such a wide array of distilled influences brewed albums as varied as the tracks on them. For example, their most famous album – the 1989 masterpiece Pirates Choice – featured the rhythmic rumba of ‘Coumba’, the folky ‘Soldadi’ and the alluring Latino hum of ‘Ultrus Horas’, on which they collaborated with the Buena Vista Social Club singer Ibrahim Ferrer.

Earlier LPs, such as On Verra Ça, had been released in Europe in the 70s to critical acclaim, but no public clamour. After the world-music renaissance, they achieved both with their comeback album, Specialist in All Styles (2002), which was nominated for a Grammy and accompanied by a world tour. Their latest album, the 2017 release Tribute to Ndiouga Dieng (it’s dedicated to an original member who died in 2016), features a song, ‘Foulo’, sung by his son Alpha Dieng, who replaced him in the band.

The power of rebirth

On stage, the concerts remain captivating and well-attended – the range of ages a perfect metaphor for their timeless music – while the group itself is adamant of its staying power, telling Le Monde in 1997 that “On nous croyait morts, mais un baobab ça ne meurt jamais. Même desséché, il refait de jeunes pousses et renaît.” (“We thought we had died, but a baobab never dies. Even withered, it remakes young shoots and is reborn.” 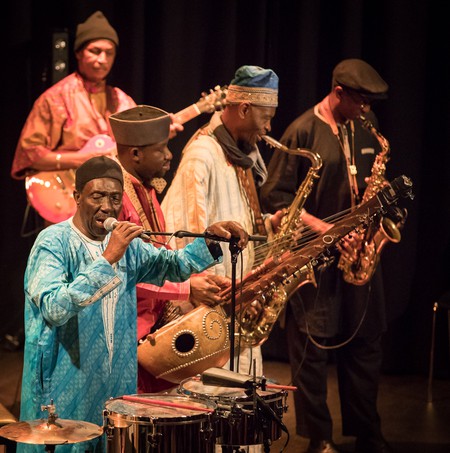 Orchestra Baobab at the Cosmopolite, Oslo, May 2017. | © Tore Saetre / Flickr

In 2018, Orchestra Baobab played the Barbican in London, and in 2019, they are set to descend on the Philharmonie in Paris. They’ve played from Sydney to New York, Hong Kong to Oslo, but the group have not forgotten their roots, recently playing an intimate venue at Dakar’s Djoloff hotel and twice at the beachside Mer à la Table restaurant. To stay tune with Orchestra Baobab’s shows, follow their website and Facebook page.

A member of Senegal's biggest band, Orchestra Baobab, plays the Kora during a concert in Oslo. | © Tore Saetre / Flickr
Give us feedback