Meet the Pirogue Builders of Senegal 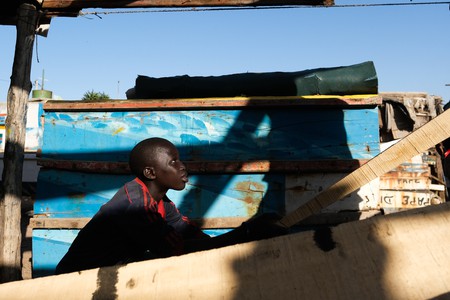 Artisanal fishing is still the dominant livelihood along Senegal’s 530 kilometres of coastline. Every day, fearless fishermen head out on wooden boats, handmade by master builders, to provide food for the westernmost country in mainland Africa.

Hundreds of fishing boats pack Dakar’s Soumbédioune beach like sardines. The brightly coloured, canoe-like hulls glimmer in the Senegalese sun, primed for another ocean adventure. A hundred metres further north at their place of origin, the boats, known as pirogues, lie in a haphazard fashion – some upside down, others on rollers; some vividly decorated, others merely a wooden frame. One day, they too will be lining up to plunder the Atlantic. 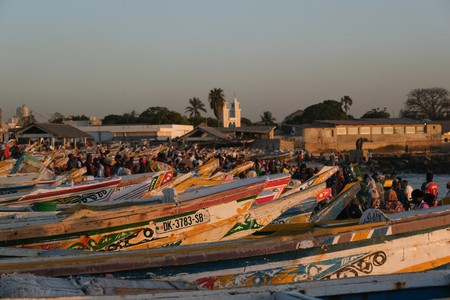 Used for fishing, transportation and, more recently, tourism, the pirogue is synonymous with the West African coast and especially with Senegal, where almost 20,000 are in operation. Sunu gaal, meaning “our pirogue” in the Wolof language, is the most commonly accepted etymology for the country’s name. 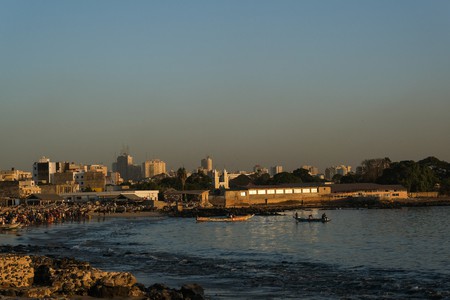 The pirogue’s most profound effect is found along Senegal’s 530 kilometres (329 miles) of coastline. Year-round, fishermen set out from Senegal’s shores; their catch provides up to 75 percent of the population’s animal protein intake and is the key ingredient in the national dish of ceebu jën (rice with fish). Indirectly, activities associated with fishing employ 17 percent of the country’s workforce.

On the northern side of Soumbédioune’s horseshoe bay lies the chantier (construction site), one of the main locations for pirogue production in the Dakar region, along with Yoff and Rufisque. The chantier has a calm atmosphere: piles of wood lie scattered among half-finished pirogues; builders relax in the shade of mango trees, chatting, napping and playing draughts with plastic bottle caps. Around 40 to 50 people come to work here each day. 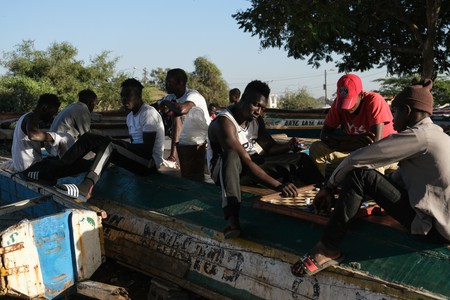 Mbaye Sèye’s workshop is near the water’s edge; a hand-painted placard with his name and mobile number hang from the corrugated iron roof. A large man with big hands, wearing a faded tie-dye T-shirt, Sèye is known as the master carpenter of Soumbédioune and has been making pirogues for 17 years. “I first came here to work when I was 22,” he says. 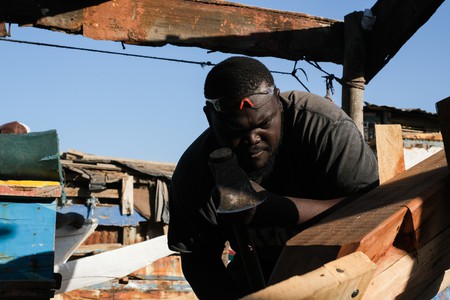 He makes four or five boats each month, depending on their size: a nimble 8m canoe takes a week; a bulky 23m boat can take a month. Pointing towards an almost-complete 9.5m pirogue that took 10 days to create and cost its new owner £1,300, Sèye says every pirogue is unique – different clients order pirogues for diverse purposes – but the process from order to delivery is remarkably consistent. 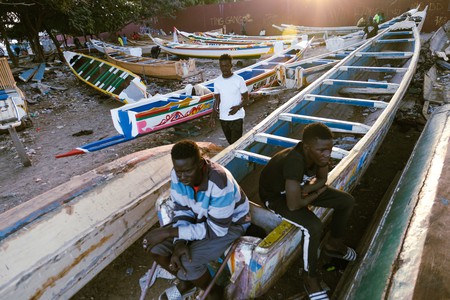 “Almost all my clients are Senegalese. Almost all are fishermen,” Sèye explains. The pirogues are built to order, with clients proposing the dimensions and receiving a quote in return. Prices range from about £800 for an 8m boat to more than £9,500 for a 23m vessel. If treated well – with a service and repaint every six months – pirogues can last up to 15 years.

Labour and raw materials account for the bulk of Sèye’s prices; the specialised wood he uses is expensive. Samba wood, for example, which is carved and moulded for the pirogue’s sides, travels from the Ivory Coast. Redwood, used for the front and bottom, comes from Casamance in southern Senegal, and can make up half the price of the final quote. 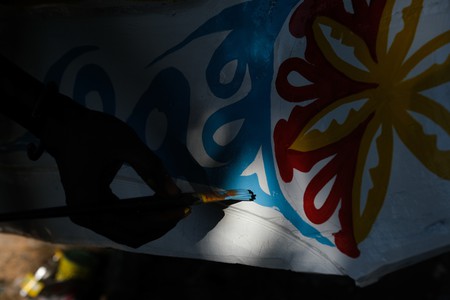 Pirogues are entirely handmade and are completed in stages. First, Sèye carves, shapes and assembles the frame – starting with the front and finishing with the back – before iron rods are implanted to fix the structure in place. Then come the finishing touches: clients can request additions, such as grills for holding fish and larger wooden bars for a double motor. The pirogue’s interior will be checked for watertightness and painted in a colour of the client’s choice – usually green, yellow or red, the colours of the Senegalese flag. This layer aids water-resistance and provides a background for any customised decorations. Images of the religious leader Cheikh Ahmadou Bamba, emblems of football teams, names of family members, religious sayings – the decorations are for good luck, explains Sèye. Most clients also pay for a marabout, or religious leader, to bless the boat before it’s used for the first time. 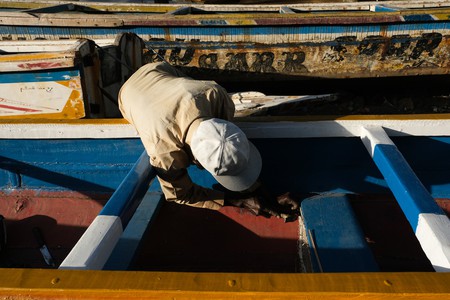 Back on the beach, excitement floats in the briny air. Most boats make their money from one big weekly catch; the support crew of mongers and merchants wait on expectantly. When a haul comes in, Soumbédioune moves like a shoal, the setting sun illuminating the ordered chaos. The Senegalese consume about 35kg of fish per person each year – the third-highest rate in the world – and ports such as Soumbédioune are essentially the country’s food depots. 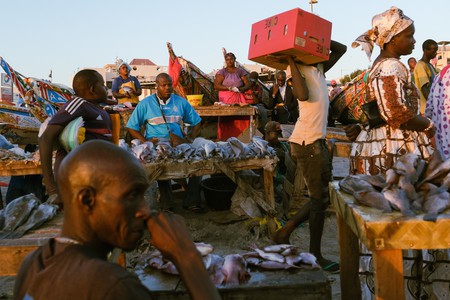 Fesco Ciss started fishing here at the age of 14. Like all the other fishermen at Soumbédioune, he uses pirogues for his livelihood. On fishing days, he and three or four others will roll their pirogue off the beach at sunrise, before travelling up to 100 kilometres (62 miles) to an area where fish are plentiful. Once in place, the team set out small weighted nets, while two of the party spear-fish around the boat. “Soumbédioune has the best fisherman in Dakar,” Ciss claims, showing me a video of a recent haul on his phone: the divers are catching huge merlu (hake), barracuda and thiof (white grouper) – the national fish – while the nets snare cigale de mer (small clawless lobsters). 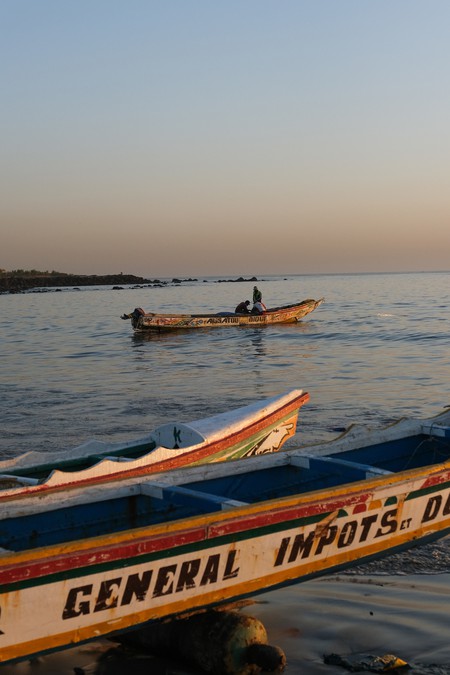 For this style of fishing, Ciss and his team use one of the shorter, quicker pirogues, such as the 9.5m model I saw outside Sèye’s workshop. These boats come back the same day, usually between 5pm and 6pm, but the larger pirogues can stay out for days at a time.

Pirogue building is inextricably linked with artisanal fishing, and therein lies the problem for master carpenters such as Sèye: Senegal’s fish stocks are depleting. In recent years, foreign trawlers have begun taking advantage of Senegal’s badly monitored waters to drain the seas. Local fishermen are now catching in weeks what they used to haul in days. A new Moroccan-funded £1.8 million quay is due to open at Soumbédioune in early 2019. But without any fish, the benefits will be muted. 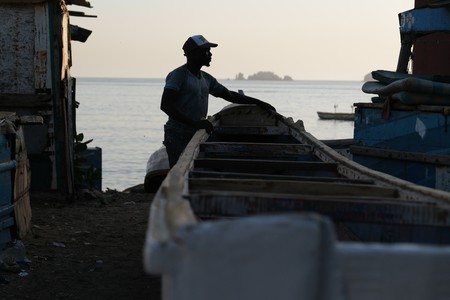 Another threat comes from the government. Fishing minister Oumar Guèye wants to oversee a shift from wooden pirogues to ones made of fibreglass, which he claims will last up to 40 years and reduce the number of trees cut down in Casamance. For now, though, the cost to make and buy them is prohibitive.

Despite these uncertainties, both Ciss and Sèye remain upbeat. Ciss believes good fishermen will continue to make catches. Meanwhile, Sèye doesn’t see demand for pirogues dropping: they are, after all, “rooted in Senegalese culture”. 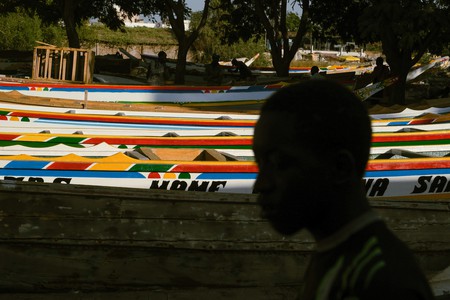 Dakar, Senegal (December 10, 2018) - The outdoor workshop where boats are made in Dakar. | © Ricci Shyrock / Culture Trip

Soumbédioune is a feast for the senses. From postcard-perfect pirogues to the waft of grilled fish and the sounds of haggling, the hustle and bustle of coastal life is embodied at this Dakar institution. For the most activity, head down at about 5pm, when the fishermen return. Wander at your leisure among the boats and through the market, before heading up the road, past the chantier and towards the cinema complex for a great vantage point of the bay from afar. 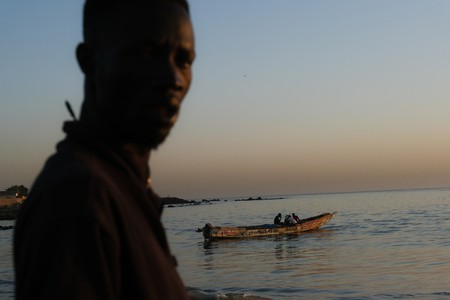 Dakar, Senegal (December 10, 2018) - A pirogue goes out to sea at Soumbedioune Fish market in Dakar. | © Ricci Shyrock / Culture Trip
Give us feedback