‘Magic In The Service Of Dreams’: The Founding Fathers Of Senegalese Cinema

The story of Senegalese cinema is intimately tied to the political and social history of the country, as the nascent post-colonial nation forged a new identity through its emerging cinema industry. Oliver Lewis from DEADBIRD Review analyses the best films of those early years, and reveals what they say about Senegalese history and identity.

The story of Senegalese cinema begins with the country’s declaration of independence from France in the summer of 1960. The following year, Beninese/Senegalese film director and historian Paulin Soumanou Vieyra, shot and released Une nation est née (A Nation Was Born), a film about the struggle that eventually led to Senegal’s independence. In 1963, the well-respected author Ousmane Sembène shot his first film, a short entitled Boroom Sarret (The Wagoner). The arrival of this great Senegalese writer and storyteller in the world of cinema marked a turning point in the country’s film industry and for the next twenty years, Sembène and a small number of other talented filmmakers would release their work both in the new cinemas of Senegal and across the world through international film festivals. These others include Mahama Johnson Traoré, Safi Faye, and Djibril Diop Mambéty, whose debut feature-length film was entitled Touki Bouki (The Hyena’s Journey). 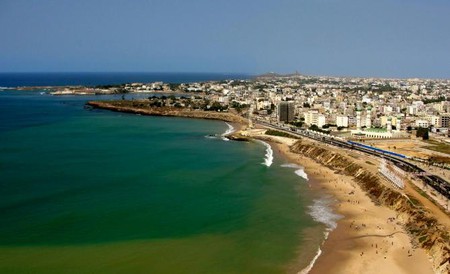 Touki Bouki (1973) tells the story of Mory and Anta. They are lovers living in Dakar who dream of leaving Senegal for a romanticised France. Their fantasies of fleeing to Paris via a steam-liner lead them to begin hustling and rooting around for the money needed to leave. The feeling of alienation which leads them both to tire of Senegal and dream of a new home is something which Mambéty had focused on in his earlier short films and which defines the atmosphere I felt in Touki Bouki, which marks it as something different from much other African cinema. It portrays the story of the two central characters, not as part of a wider community or setting, but as an isolated, constantly mobile element in a film which does show parts of Dakar, its people and the surrounding country, but is not focused on them. This feeling of living a marginalised existence and the urge to break free is understandably a result of Senegal’s colonial history and the effects this has on the lives of native inhabitants.

Without looking too deeply into the film’s ideas, it could be said that this film idolises a Western lifestyle and paints that all-too-familiar image of a better land across the sea, which the poor inhabitants of Africa can only dream of experiencing. This is not the case at all, nor do I believe this film to be projecting a wholly anti-Western sentiment in satirising this idea of idolisation. I found this film to be a refreshingly honest hybrid of these two attitudes and through this juxtaposition it declares a positive outlook on foreign influences and what it is to be Senegalese. As a piece of work, not only does it have a remarkable energy and pace, but it is also visually stunning. The colours are vibrant and the landscapes are striking in the rich natural light and are given time and space in the frame to lure the viewer towards them. The coastal photography is particularly crisp for low-budget African film in the early 1970s. There is an effective juxtaposition between the fast-paced road movie elements and the quieter, gazing shots of the land and sea. Mory and Anta reflect these two states accordingly, which can be seen as another example of the film’s hybridity. The soundtrack and camerawork are also used in an inventive way to create excitement, serenity and intrigue, making Touki Bouki a very audacious and significant film for early Senegalese cinema.

Xala (1975) by Ousmane Sembène is another classic work of early Senegalese cinema, and although very different from Touki Bouki, is just as revolutionary. Sembène, the author turned filmmaker, began as a writer championing social change and it is this important concern which dominated his films. He shifted his creative focus from writing to filmmaking in order to reach a wider audience, and one that went beyond the French and African elite which were often his target. He translated many of his short stories into films and during the 60s and 70s he rose to fame as the country’s (and some say, as Africa’s) leading filmmaker. Like Mambéty, Sembène used cinema to comment on the dire social and political conditions of Africa as a whole and in particular, his native Senegal, which had just gained independence from France. His films were also fast-paced and unconventional in comparison to the slow, methodical African cinema often seen at the time and where Touki Bouki adopted a more ‘avant-garde’ approach to its subject, Xala took the form of severe and ironic satire and dry comedy which I have not seen before in any African film.

Xala (adapted from one of Sembène’s books) tells the story of El Hadji, a Senegalese businessman who takes a third wife in celebration of his social and economic success. On the night of the wedding day, he suffers from impotence and is unable to consummate the marriage. At first, Hadji suspects his first two wives of placing a curse on him, but as the film unfolds it soon becomes clear that the real source of his problem exists all around him – it is the civilian in the street. Sembène uses sexual impotence (for which ‘xala’ is the word) to symbolise the post-colonial government’s inability to refrain from greed and to steer away from foreign influences. This was strong criticism and subtle comedy working brilliantly together to highlight the corruption of African leaders in Senegal after independence. This film (partly funded by the government) angered the government immensely and it is said that eleven cuts were made before it was released in Dakar. The script serves well in depicting the major differences between Hadji’s generation and the new generation – that of his daughter’s. In doing so, this film champions women’s rights and also paints a picture of a world in which men who are of old-fashioned, non-progressive minds, are taking the reins of their country for the first time and with that, creating a new set of problems.

There is a powerful scene early on in the film in which Rama (Hadji’s daughter) labels every polygamous man a liar, knowing full well about her father’s second wife. Hadji looks at her sternly and asks her to repeat herself, when she does he slaps her down to the ground, shouting ‘remember this: I am master here. If you don’t like it, take your revolution elsewhere. It’s people like me, your father, who kicked out the colonisers and freed the country. Polygamy is part of your religious patrimony’. Sembène’s critique of the new African bourgeoisie and his representation of the strength of African women are among his films’ strongest qualities and Xala is arguably the finest example of how he dealt with these themes. The success of Xala and Sembène’s other films is due to his passionate embracing of Senegalese culture, evidenced in the use of the Wolof language. It is also due to the subtle filming style he used to capture real life in Senegal whilst weaving social realist narratives which challenge its rulers handling of the country’s social and political problems. Sembène continued making powerful films throughout the 1970s and early 80s, a period seen as the golden years of Senegalese cinema and one in which Senegal remained one of the few Sub-Saharan countries in Africa to have a thriving cinema culture.

However, an economic crisis in the mid-1980s marked a turning point in Senegalese cinema, a point from which it began to slowly decline. With the government having ceased almost all funding for film production, the few directors who continued making films, namely Sembène, relied entirely on foreign funds. Fortunately for Sembène, his films had already become great hits at international festivals and so American funding was granted to him without much trouble. For less well known Senegalese filmmakers and emerging talent however, the outlook was far more disappointing. This film industry remained abandoned for many years and it is only in the last year that a new culture minister has been appointed in Youssou N’Dour, who has pledged to revive this dying industry and so has created an air of optimism among both the native and international filmmaking communities. However, today there is still much to be improved. For example, a recent hit film from Senegal’s Moussa Toure, entitled La Pirogue (2012), is unlikely to be seen by the average Senegalese despite international screenings and acclaim, due to a fundamental lack of funds and resources required by Senegal’s few remaining cinemas to screen new material. Though it is great that filmmakers such as Toure are receiving foreign funds to make successful films like La Pirogue, it is essential that enough support is given at home so his fellow Senegalese filmgoers are able to watch their country’s output and to see the films which are representing their country on the world stage.