La lutte fights are the talk of school-grounds, offices and social gatherings across Senegal | © Culture Trip

‘La lutte’ is more than just Senegal’s national sport. Drenched in mysticism and ancient traditions, this unique style of wrestling has developed into a national obsession that transcends geography, ethnicities, generations and social class.

Wrestling, or ‘la lutte’, is popular across the whole of West Africa, but in Senegal it’s a whole different beast. Men with chests bared and clad in loincloths grapple from the beaches of Cap Skirring in the south to the banks of the Senegal river in the north. Tournaments pack village squares and 30,000-seater arenas. Fights are the talk of school-grounds, offices and social gatherings, while its stars are more famous than politicians and footballers. Fanatically popular, markedly spiritual and distinctly Senegalese, the quintessential sport of Senegal is much more than your average wrestling contest. 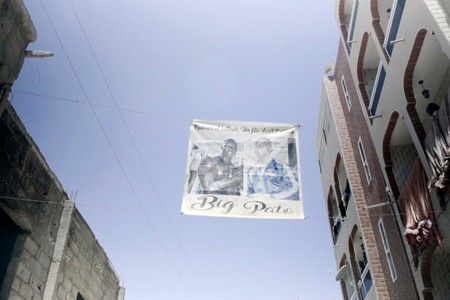 La lutte is a national obsession in Senegal | © Culture Trip

Loyal to its ancestral roots

“La lutte is inherited from our ancestors,” says Pathée Boye, a policeman in Senegal’s capital Dakar who also wrestles under the name Big Pato. He, like centuries of lutteurs before him, is carrying on a tradition dating back to the Serer warriors of the 13th century. A tradition that has remained loyal to its roots, while being updated for the modern era.

The Senegalese version of la lutte is the only form of wrestling that still permits striking with one’s hands. Modern day fighters blend ancient techniques and tactics with raw strength and power to force their opponent on all fours, on to their back or out of a designated ring.

Then there’s the spoils. By its very nature, one-on-one combat is a battle for pride and respect, but lutteurs of the past would also fight for recognition and shares of local harvests. Boukar Djilakh Faye, a fighter from the 14th century, used his wrestling prowess to marry into the Sine royal family and eventually become king. Nowadays, fighters throw their weight around to become the ‘Roi des Arènes’ (King of the Arenas).

Communities would traditionally organise tournaments after the seasonal rains, with villages competing for a share of each other’s harvest or catch. Today, communities are still fiercely proud of their local champions – Modou Lô, one of the most famous wrestlers of the past decade, is known as the ‘Rock of Parcelles Assainies’, Balla Gaye 2 is the ‘Lion of Guédiawaye’ and Moustapha Guèye the ‘Tiger of Fass’ – but ever since a fighter called Tyson, the prizes have been much bigger than a bundle of crops. 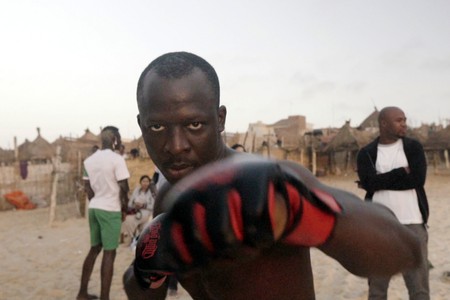 Undefeated between 1994–2002, Tyson (Mouhamed Ndao) became the first ‘Roi des Arènes’ in 1999 and had a lifestyle to match: his 4x4s and entourages were more akin to an American boxer than a Senegalese wrestler. This dominance, ‘star’ persona and legions of fans had sponsors champing at the bit and kickstarted the subsequent financial tsunami. Prize money soared from thousands of CFA to millions of CFA, with the biggest names pocketing up to $250,000 per fight. Lutteurs’ faces were plastered on buses, homes and billboards advertising energy drinks. Specialised arenas were built. Dedicated TV channels set up. A daily lutte newspaper, Sunu Lamb (‘Our Lutte’ in Wolof), established. There’s even a lutte app game available for download.

Intense coverage fosters intense popularity, especially among young men in the poorest parts of Dakar who see la lutte as a ‘way out’. Many of them are members of the city’s 100+ ‘stables’ (local wrestling clubs) who head to the beaches at dusk to practise. They train in the hope of being spotted, but the training only gets you so far. La lutte may be a physical, psychological, technical and tactical battle, but it’s a mystical one too. 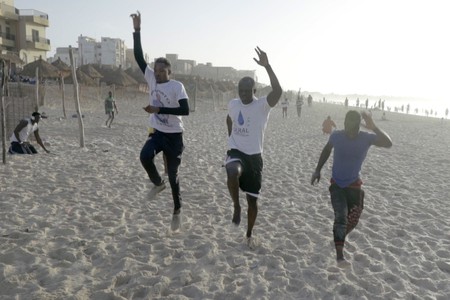 Genies and evil spirits have long had a penchant for heroes, so it’s no surprise that the mystic has long been associated with la lutte. For centuries, religious-shamans known as marabouts have played a fundamental role in a fighter’s success. Blending a mixture of folklore, animist and Islamic beliefs, marabouts allay superstitions, ward off bad spirits, protect fighters with gris-gris (amulets) and seek to increase their popularity.

The best fighters pay for an army of the best marabouts, each with distinctive roles. Some perform animal sacrifices in the home pre-fight, others recite religious incantations as they enter the ring. Some place charmed animal horns on fighters’ bodies, others concoct xarfafoufa – blessed water mixed with leaves and plants – and safara – drinks infused with ingredients such as bird feathers and the ash of burnt prayers.

“The mystic activity depends on the entourage of the wrestler and the belief of the wrestler in this practice,” explains Moussa Gningue, the former sorcerer of the Fass ‘stable’. Some wrestlers, such as Bombardier, consider mysticism less important than physical preparation, but others, such as Modou Lô, will “look everywhere for an advantage in [the spiritual] sphere”. Double Less, the father of Balla Gaye 2, even admitted to spending 50 million CFA ($85,600) on mysticism for one of his son’s fights noting that “he does not joke around when it comes to the mystical aspect”. 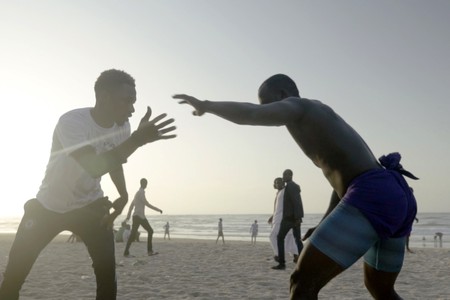 Whatever a fighter’s predilection, there’s no denying that the spiritual rituals add to the lutte’s build-up and spectacle. Threats of curses and bad gris-gris are a promoter’s dream and help whip up the crowds even before they enter the arena.

When they do, they are hyped into a frenzy by the organised chaos of dancers, drummers, costumes and chanting. Although fights can last a matter of seconds, it can be hours before the main two wrestlers stride out to the ring with their phalanx of marabouts and deliver their bàkk (a brief, bravado-infused speech), before engaging in an ancient practice that, unlike other sports, is definitively Senegalese. 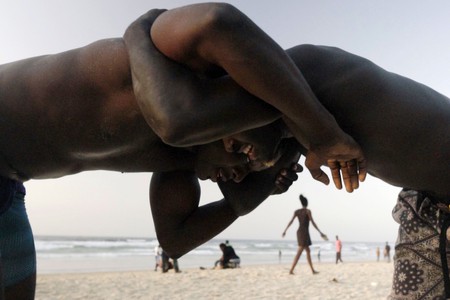 matches can last seconds or hours, but are always a major event | © Culture Trip
Give us feedback