Dakar’s Car Rapides: A Symbol of the Senegalese Capital 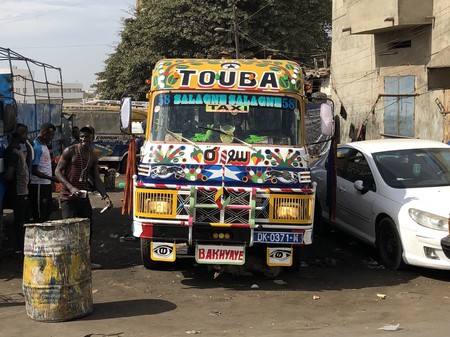 The Car Rapide is a Dakar institution. The inspiration for a large number of the souvenirs in Dakar’s markets, these unique, colourful, hand-painted local buses are the ultimate symbol of the Senegalese capital.

From fridge magnets to sketches, key rings to coat hooks, the Car Rapide is by far and away the most ‘souvenired’ item in Dakar, and for good reason. Their intricately-decorated chassis are as synonymous with the city’s bustling streets as New York’s yellow cabs or London’s red buses. 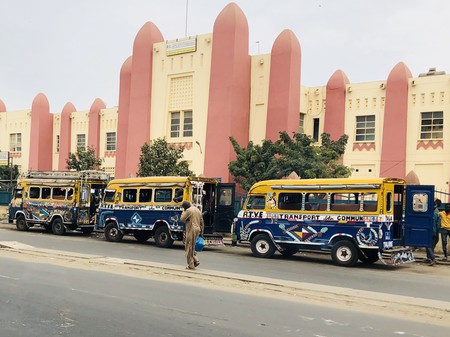 Made in France, transformed in Senegal

In their former lives, the Car Rapides were simple, windowless vans that ferried goods around French towns in the 1960s. A decade later, they touched down on Senegalese soil and were reborn. Entrepreneurial locals added windows, seats and custom paint jobs, offering cheap, communal transport at a time when public transport was merely a futuristic vision. The Dakarois were besotted, and by the end of the 1990s there was an estimated 3,000 Car Rapides weaving around the city.

Car Rapides are a misnomer: they are neither ‘rapide’, nor are they a ‘car’ (bus) in the conventional sense. That’s because Car Rapides have no set routes – just destinations – usually ferrying locals downtown in the mornings and back to the outskirts in the evenings.

Between the driver up front and the conductor swaying off the back, they trundle down major roads drumming up business at bus stops, roundabouts and crowded curbs. But they can also be hailed down like a taxi and rove through back streets to avoid heavy traffic.

Costing between 50–200 CFA (9–35¢) for a ride depending on how far you’re travelling, the interior can hold about 20–30 persons according to the model and layout, while the capacity swells by 10 during rush hour to account for the huddle of men swinging off the back. 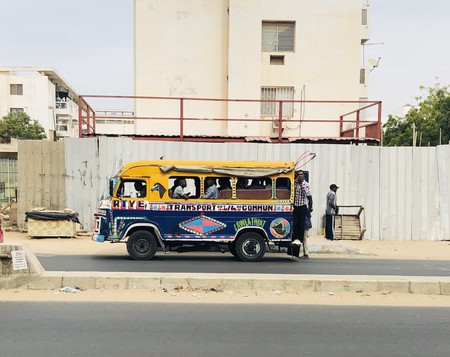 Art on the move

As a city known for its colour, it’s no surprise that Dakar’s most popular form of transport is a moving painting. Predominantly yellow and blue (the colours of Dakar), each vehicle is unique, displaying the whims of the owner and artist.

In the shadow of the shabby Gare Lat Dior in downtown Plateau, two head painters and a team of boisterous young apprentices transform vehicles in exchange for 15,000 CFA ($26). “Owners drop them off, give instructions and then we paint,” says a boyish Moussa, as he splashes a thick enamel coat onto the inside of the tyres. However, these instructions are usually limited to adding the customary transports en commun slogan as well as the name of the owner’s chosen marabout as a mark of respect. Then it’s down to the painters’ imagination.

For a country that is 95 percent Muslim, this naturally involves many Islamic references, such as Begue Fallou (Love Fallou) or Al-Hamdoulilah (Thank you God). Senegalese flags are etched above headlights. Eyes are added to bonnets and tails to exhaust pipes, “giving the vehicle spirit”. Images of horses, lions and sparrow hawks jostle for prominence with pineapples, palm trees and football emblems. Floral patterns stand to attention with stars and colourful geometry.

Inside, photos of famous footballers, marabouts and lutteurs (wrestlers) are plastered on the walls. Musical klaxons are custom fitted. Pieces of cloth dangle from the wing mirrors. Their significance? “They’re [just] for decoration,” replied a bemused Moussa. 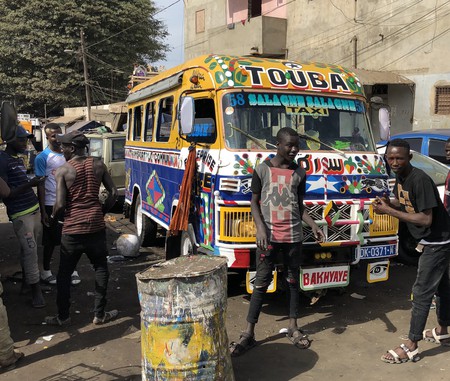 The team at Gare Lat Dior after applying the finishing touches to a commission. | © Beetle Holloway / Culture Trip

Twenty-four hours after being dropped off at Lat Dior, another freshly painted Car Rapide (its elderly state now well concealed), will roll back on to the urban landscape. But for how much longer?

Despite being emblematic of local expertise – renovated, decorated and eventually driven by locals for locals – the time of the Car Rapide could soon be up. Being heavy polluters with a poor record of safety, Car Rapides have been in governmental crosshairs since 2005, with successive administrations planning on replacing them with government-bought buses from India and China.

Locals are dismayed: nostalgia is no substitute for safety, but the buses are no substitute for the Car Rapides either, they claim. The Rapides’ informality and personality are wholly at odds with bus routes and timetables. Buses’ fixed prices deter poorer passengers who often travel the Rapides for free. The layout of the Car Rapide facilitates conversation and social cohesion, while the business model encourages enterprise: the best design, routes, upkeep and conductors make the most money.

However, their arguments have largely fallen on deaf ears with the government slapping a 2018 target on the Car Rapides’ backs. Given the yellow and blue stream that still trickles down Dakar’s roads, it looks like a new target will have to be set. 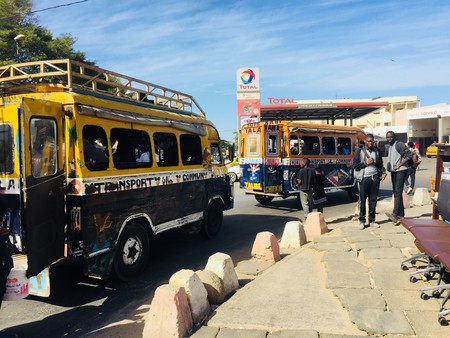