The Best Restaurants in Dakar, Senegal 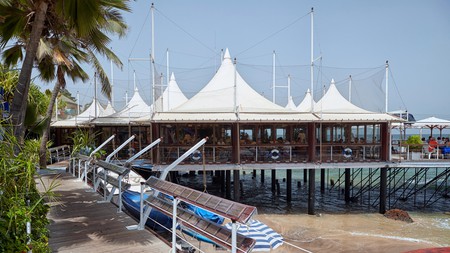 The former capital of French West Africa, Dakar is a melting pot of cultures with a range of restaurants as diverse as the city itself. From seaside shacks to fine dining, the city has something for every taste and every budget. Here are the best restaurants in Dakar, Senegal.

Dakar perfectly embodies the travelling foodie’s dream: eat very well for not very much. Even at the top end of the scale, an exquisite meal of freshly caught fish is unlikely to be more than 6,000 West African CFA francs (£7.60), while equally delicious Senegalese specialities at local haunts can be as low as 630 francs (£0.80). 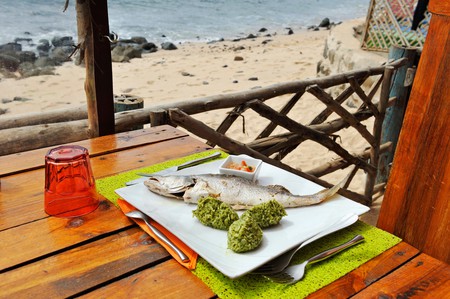 Dakar is surrounded by the Atlantic and its menus are dominated by its produce. Nearly all the sea-facing restaurants serve traditional catch, such as lotte (monkfish), dorade (sea bream), thiof (grouper), calamars (squid) and gambas (large prawns). Further into Dakar, the cheaper and more traditional restaurants offer plates of the national dish thieboudienne (‘fish with rice’ in Wolof) and mafé (peanut-based stew). Meat options tend to vary between chicken and beef, while vegetarian choices are limited but growing.

Great restaurants can be found in every district across the city, but particularly in the more expat areas, such as Ngor, Almadies and downtown Plateau. 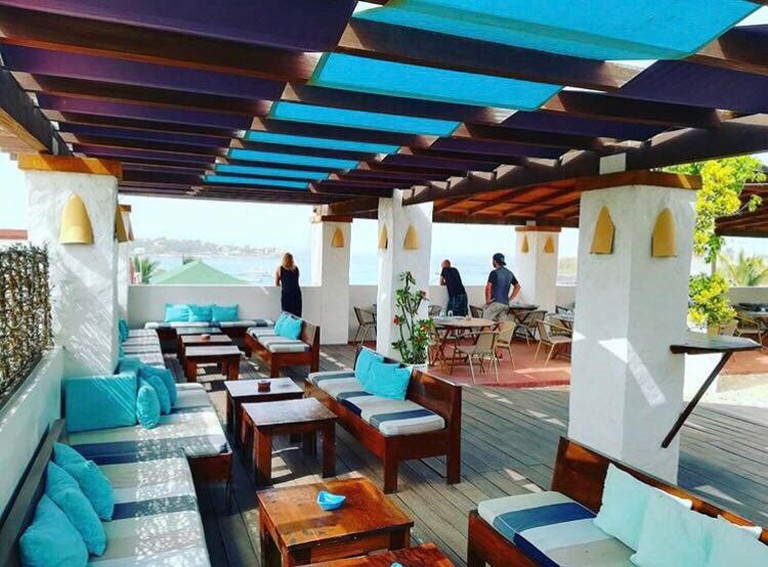 Blending cosy alcoves and West African decor with creative cocktails, eclectic beats and a relaxed vibe, Bayékou’s roof terrace is one of the most stylish bars in Dakar, but its culinary draw is arguably even stronger. Being surrounded by the Atlantic on three sides, finding freshly grilled fish and seafood is not difficult in Dakar, but Bayékou’s menu mixes the local produce with Italian and South American influences for some unique fusion fare. From mixed ceviches and tuna tartare to seafood linguine and home-made ravioli, Bayékou provides an exquisite menu for both lunch and dinner. 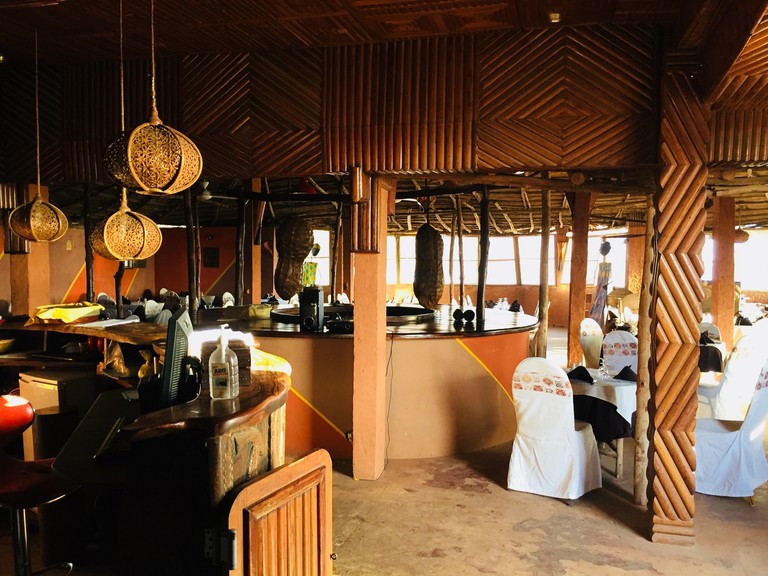 Part restaurant, part African art gallery, La Calebasse in Mamelles provides a feast for the eyes, ears and the stomach. Its exterior is guarded by carved wooden bouncers. The staircase to the covered rooftop restaurant is lined with photography, paintings and masks from the continent. Two giant peanut sculptures (Senegal’s most famous crop) take centre stage in the restaurant, while live African music and dance often accompany a weekend meal. On the business of eating, traditional dishes such as yassa (onions, garlic and lime) chicken and mafé (a meat stew cooked in a thick peanut sauce and served with rice) are some of the best in town served with a selection of sides – think attieké (manioc couscous), alokko (fried plantain) and white sweet potato fries – that should always be shared by the table.

Noflaye is the one of the best-value restaurants in the often overpriced Almadies – especially given its location. One of the last spots on the Petite Corniche strip, Noflaye’s double-tiered seating area looks out over the ocean uninterrupted. The sand floor, wooden seats and rustic villa-style tables give Noflaye a relaxed, beachside vibe that is mirrored by the jovial, attentive staff. The menu is also great. From a range of stuffed galettes to freshly caught fish, Noflaye’s menu is simple, decent and well priced. The standout is the brochette de lotte (monkfish skewers), which comes with two sides for 4,500 francs (£5.70). 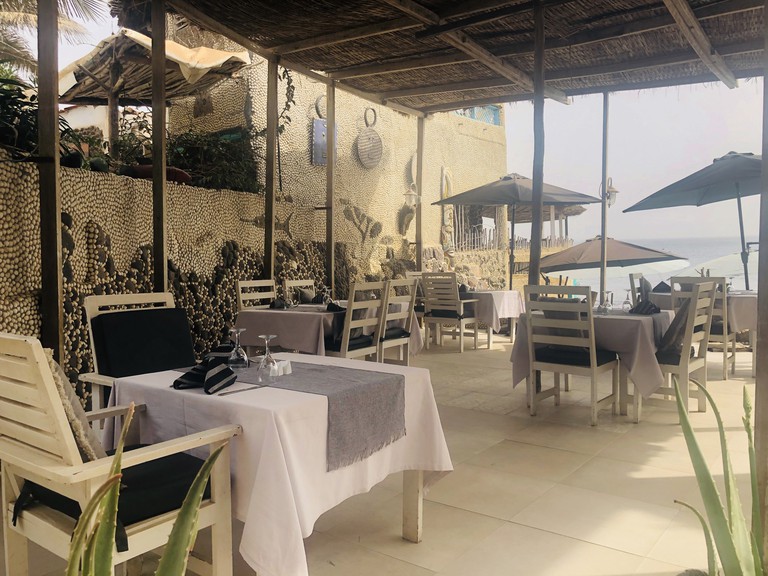 ‘Feet in the Water’ is an apt name for this excellent restaurant at the farthest end of the Petite Corniche. Given its distance from other restaurants, Pieds dans L’Eau offers a secluded cove with its own private section of the Atlantic lapping at its shore. The restaurant itself is mesmerising: African sculptures and shell-dotted walls crossed with colourful mosaics and open-air mezzanines. To complement the uptick in setting, Pieds dans l’Eau offers considerably more than its neighbours in terms of service and quality of food. The small touches, such as the warmed baskets of wholegrain rolls, are matched by a menu where fresh fish and seafood dominate. 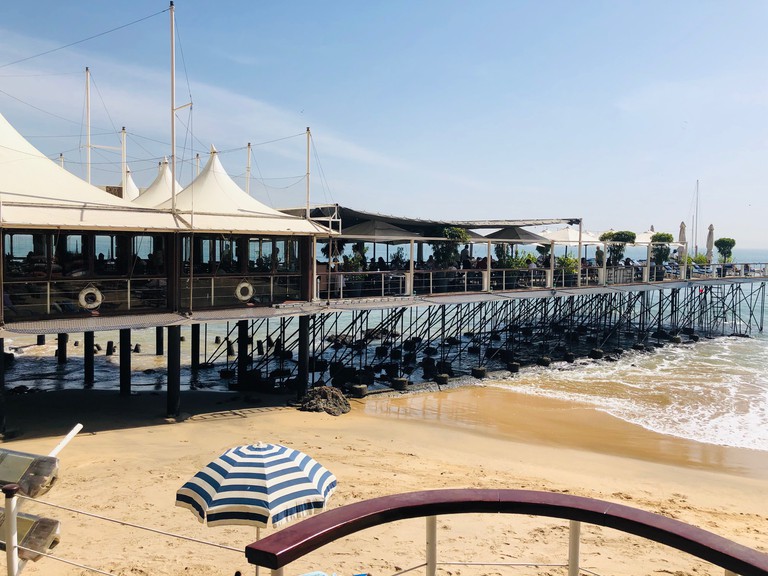 The Lagon 1 is the closest Dakar comes to having a pier. Stretching out into the sea on a stilted boardwalk, waves lapping onto the adjacent beach, it’s hard to imagine a finer setting for a restaurant on the peninsula. Part of the Lagon Hotel (aptly named Lagon 2) on the southern edge of Dakar, the restaurant’s interior is as eye-catching as the exterior, with its futuristic fishing cabin decor. The boardwalk stairs are lined with famous patrons, including world leaders, footballers, Hollywood royalty and actually royalty. On the private pier, the choice of view is either a secluded cove or the Atlantic out to Ile Gorée. Unsurprisingly, the fish here is excellent, while Lagon 1 also offers one of the more extensive dessert menus in the city.

La Marée is shell heaven. The floor of the restaurant is laden with shells, the menu even more so. From oysters, mussels and giant clams to cockles, urchins and winkles, La Marée is renowned for producing a feast of coquillage (shellfish) and mini-mountains of empty shells. As a cherry on top, its location on the tip of the Pointe des Almadies gives it a fair chance of being the westernmost restaurant in mainland Africa with the sunset and Atlantic views to match. 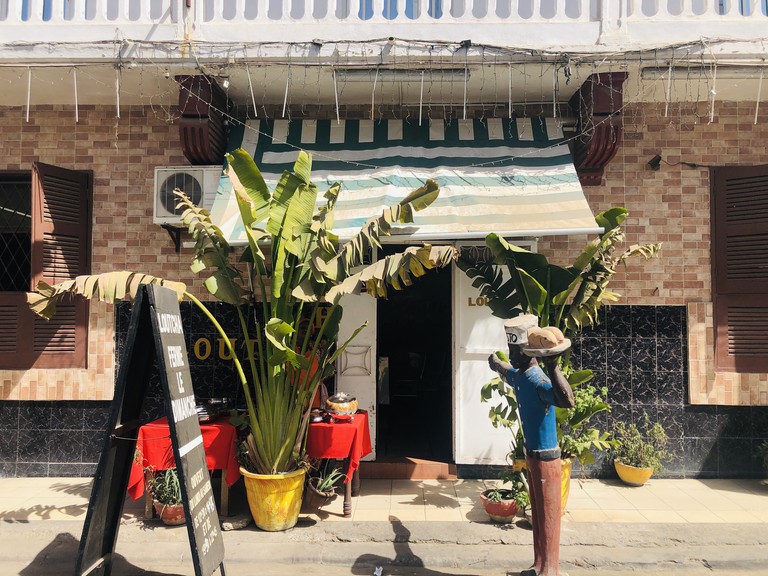 Chez Loutcha serves up the best of Senegalese cuisine to perfection. Yassa is usually served over chicken or fish; at Chez Loutcha, the yassa is like a warming onion soup with either two chicken thighs or a whole dorade (sea bream). Loutcha’s thieboudienne (the national dish) nails the tangy concoction of fragrant rice, white fish and stewed vegetables in a serving enough for three. Centrally located, it’s a favourite lunch spot for those working in downtown Plateau and its no-frills interior is constantly busy. With its locally renowned food in generous portions and its prices in the bargain territory, Chez Loutcha is a must-visit. 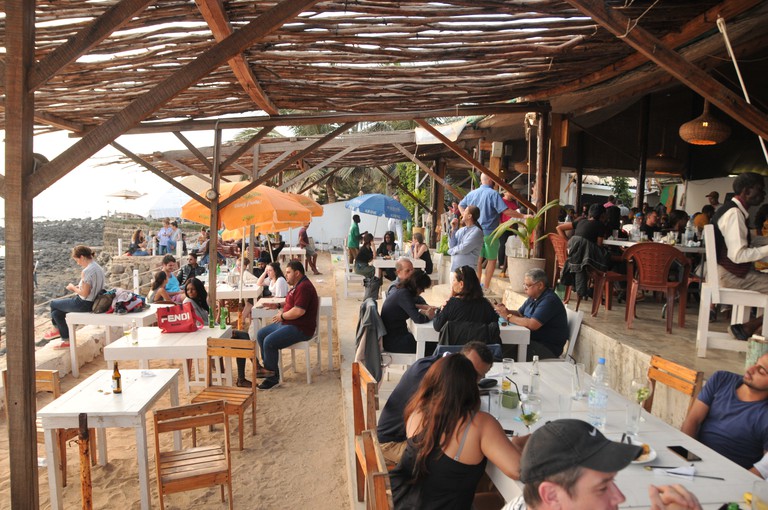 As the name suggests, La Mer à Table is about as close as it gets to eating in the sea, without actually eating in the sea. A large, spacious restaurant on Almadies’ Petite Corniche, La Mer à Table has a number of strings to its bow: from a large shaded interior and a well-stocked bar to its surf spot-facing terrace and fantastic grill. In addition, La Mer à Table has also recently helped fill Dakar’s live music void by hosting some of the biggest names in Senegal, including Orchestra Baobab and Cheikh Lo, as well as Latino and Cape Verdean bands. For live music, a beautiful setting and delicious fare, there is no better place on the weekend.

A small, Italian restaurant might not scream ‘Dakar’s best restaurants’, but Reine Margarita is beloved for good reason. Opposite the Stade de Ngor, tucked inside a woven exterior, lies the best pizza and pasta in Dakar. The menu is written in Italian. The TV plays Italian football. One sign in French proudly states that this is a real Italian restaurant and therefore does not serve ketchup, mayonnaise or mustard (Italian olive oil and infused chilli oil only). From the caprese and the lasagna to the tiramisu and the grappa, Reine Margarita never once compromises on the Italian specialities and the result is as phenomenal. 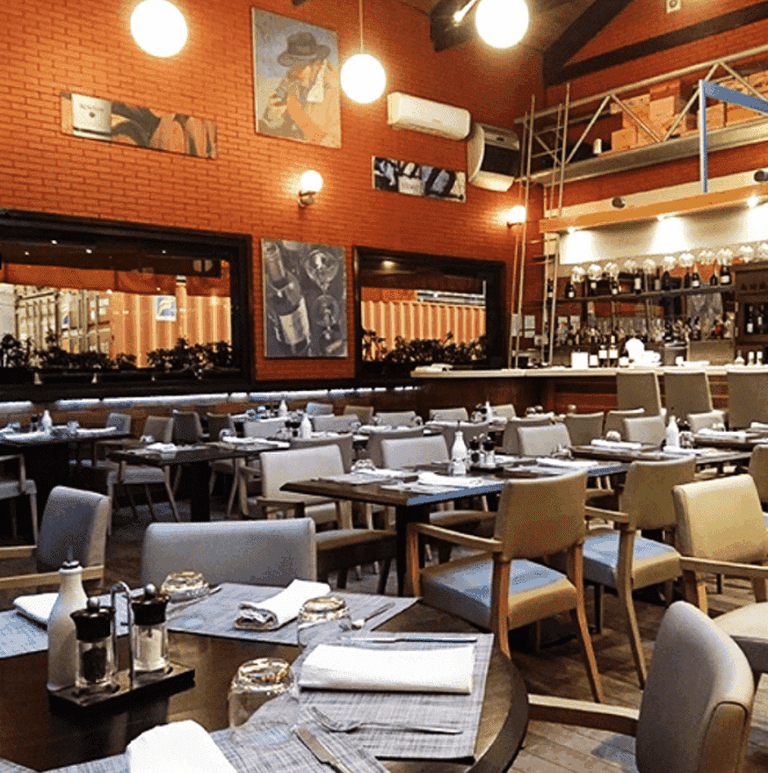 “The best steak in Dakar” – La Parrilla doesn’t mess about. Importing its meats from South America and cooking on traditional wood fires, La Parrilla does not compromise on quality or authenticity, whipping up succulent cuts of bife de lomo (fillet steak), bife de chorizo and beef heart. A calm, airy restaurant in downtown Plateau, La Parrilla could have been plucked direct from the streets of Buenos Aires. Paintings of tango dancers jockey with cow hides for space on the walls. Home-made empanadas and grilled provolone dominate the starters, while dulce de leche and malbec own their part of the menu. But, with La Parrilla translating as ‘The Grill’, there’s one menu item that stands above the rest. 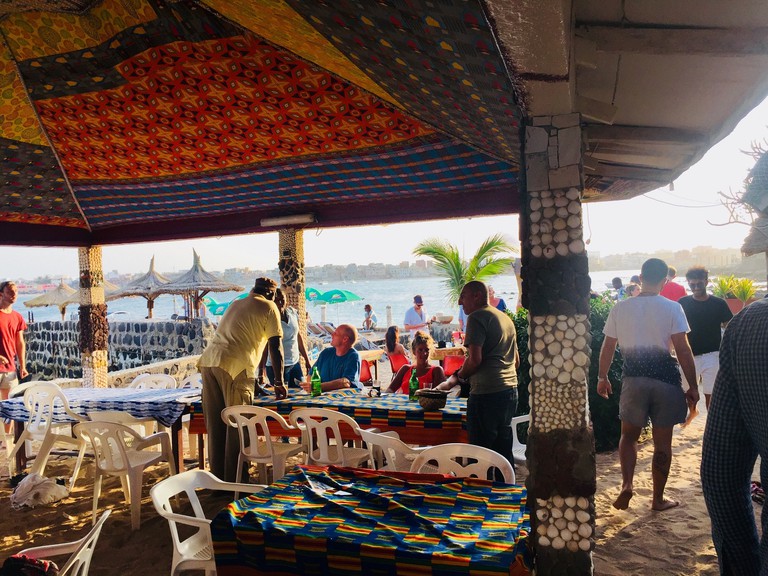 Although only 400 metres (1,310 feet) from the Dakar mainland, Ngor Island feels a world apart. Narrow cobbled backstreets weave between rustic homes and small inlets. Tiny beaches dotted with parasols. It’s one of the best places to while away a day in Dakar, and Sunu Makane, known as Chez Seck, makes the perfect base camp. This charming little restaurant sits enviously on the corner of the island, with crystal blue waters lapping up on two sides. On the tables, you’ll be served simple local fare done well. Grilled fish and seafood are the order of the day – full plates ranging from 3,000-5,000 francs (around £3.80-£6.35) – with a magnificent panorama of Ngor Bay. It even has its own boat to and fro the mainland, which goes more frequently than the local pirogues.

Simple, effective, delicious. La Churrascaria roughly translates as Brazilian BBQ, and that’s exactly what it delivers. A flat 10,000 francs (£12.70) per head, the first course is a ‘salad’ buffet, jam-packed with vegetables, croquettes, meats and cheeses. It’s easy to go overboard, but it’s worth holding out for the swords of barbecued meats. Giant skewers of pork, beef, lamb and chicken are whisked away from the open-clay barbecue and expertly sliced from metal to plate. Each skewer is cooked from rare to medium, so all bases are covered. Go hungry as the waiters don’t stop serving until told to.