The Best Things To Do on Senegal’s Grande Côte 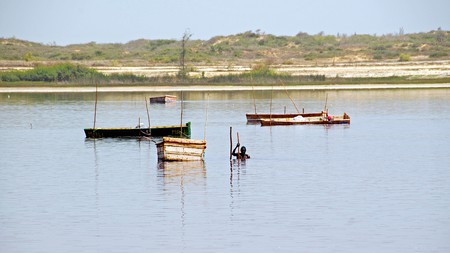 A 200-kilometre arc of endless beach, the Grande Côte is the longest uninterrupted stretch of coastline in Senegal.

The Grande Côte (the Big Coast) arches north from Senegal’s capital, Dakar, to its former capital, Saint-Louis, on the Mauritanian border. Like its shorter southern cousin, the Petite Côte, it boasts fishing villages, golden beaches and Atlantic waters, but the comparative lack of seaside resorts and tourist infrastructure lends the Grande Côte a heightened sense of serenity and adventure. Here are some of the best things to do.

For many, this is where the Grande Côte really begins. Almost 32 kilometres (20 miles) northeast of Dakar, Lac Rose is one of Senegal’s most famous attractions. Its distinctive pink hue (although often a murky red) is conjured by rare algae that thrive in the lake’s remarkably salty waters, which can be up to 10 times saltier than seawater. The salt also generates an income for locals – salt mounds line the water’s edge like giant heaps of sugar – and provide added buoyancy to all those who take a dip.

Officially known as Lake Retba, the rouge-tinted body of water is a little over one square mile and can be easily circumnavigated on foot or by vehicle, although it’s also possible to rent quad bikes, buggies and camels on the lakefront. Restaurants and lake-side hotels have sprung up to accommodate the tourist footfall – with the deck of le Trarza and secluded Bonaba Café being two of the best spots – but what is often forgotten is the beach: Lac Rose is only a short, duney walk from the coast.

Kayar is one of the largest fishing hubs in Senegal. Every year, about 13,000 tonnes of scaly bounty (16 percent of the national catch) are piled up on beachside tables and wooden crates before heading off to feed large towns and tiny hamlets alike.

Unlike the Soumbédioune fish market in Dakar, Kayar is not constrained by the size of its port, bay or even encroaching city buildings, allowing the beach to spread out for miles. In the morning, rows of coloured pirogues are awoken from their slumber by overalls-clad fishermen. Later, the setting sun joins forces with fishmongers and traders to welcome them back. As such, a late-afternoon visit is not just a front-row seat to an industry that supports countless Senegalese lives, but a buffet, too. 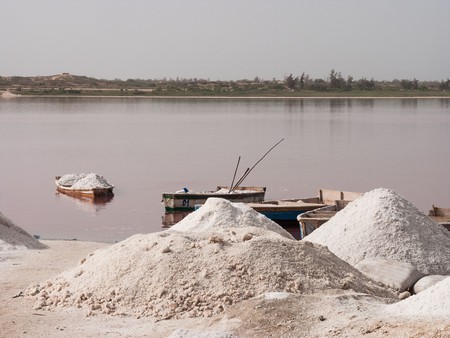 From tropical waterways and sprawling deltas to sandy islands and barren scrubland, Senegal is a country of geographical extremes. Therefore, it should come as no surprise that Senegal also boasts a desert straight out of a Lawrence of Arabia film set.

Midway between Dakar and Saint-Louis, the Lompoul Desert is seven square miles of rolling orange dunes stacked beneath a cloudless sky. Here, the distant sea breeze is the only interruption to the silence. It’s a tranquil setting that can be enjoyed from the comfort of small, Bedouin-style camps in the heart of the desert.

Eco-lodge and Horizons Bleus are a cut above the rest, offering white tents, hammocks strung between trees and dinner under the stars, as well as activities such as dune surfing and camel rides. You can either stay overnight or visit for a three-course lunch, but calling in advance is mandatory as the lodges will have to collect you in their four-by-fours from Lompoul village. 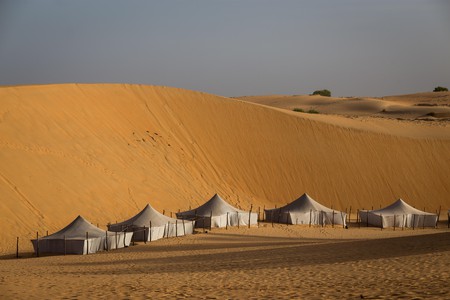 The Langue de Barbarie (Barbarie’s tongue) is a narrow, sandy strip that provides a buffer between the Atlantic Ocean and the Senegal River estuary. In 2003, a catastrophic attempt was made to dig a four-metre-wide (13-foot) flood channel through the strip, turning the Langue into a six-km (3.7-mi) trench. However, failure can sometimes lead to unexpected success. Without a mainland connection, the Langue de Barbarie National Park’s wildlife has thrived. Fleets of gulls, terns and cormorants descend on the island to nest, while turtles and lizards have transformed the beach into an open crèche. Idly strolling on the small dunes is now like visiting a desert island without all the hassle of a shipwreck.

To get there, most hotels in Saint-Louis offer half-day guided trips by pirogue (about 15,000 CFA francs or £20 per person) with lunch usually included – or you can drive to the village of Mouit and ask a local piroguier to ferry you there and back for half the price. The park entrance fee is 2,000 CFA francs (£2.75) per person. 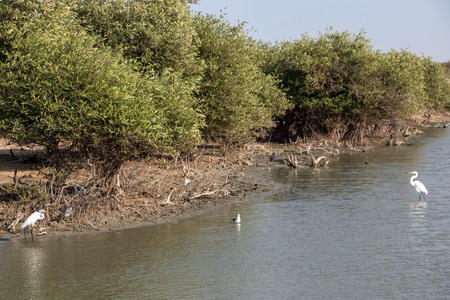 Sandwiched between the flowing Senegal River and rolling Atlantic waves, the Hydrobase is a beach like no other. Stretching down the northern strip of the Langue de Barbarie, a few miles south of Saint-Louis, the Hydrobase is the closest thing you’ll find to a beach resort on the Grande Côte, accommodating both tourists – think hotels with kidney-shaped swimming pools, palm-tree-lined cocktail bars and private deck-loungers – and local families escaping the city on weekends.

As such, its long stretch of golden sand beaches is at times untouched, other times frenetic. But whether you go on a weekday morning or weekend afternoon, be wary of the strong tides and currents and avoid swimming in unflagged areas. 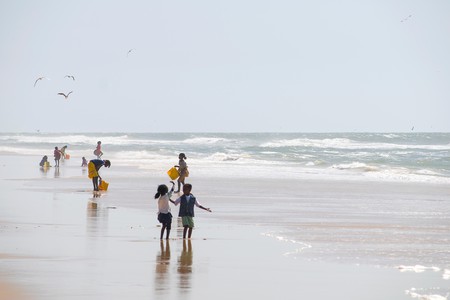 The island of Saint-Louis

Crossing over the 19th-century Faidherbe Bridge to the island of Saint-Louis is like crossing over to the 19th century itself. Awash with pastel houses, cobbled courtyards, market squares and narrow streets, the former colonial capital of French West Africa has kept much of its period charm. At less than 2.4 kilometres (1.5 miles) long and 0.4 kilometres (0.25 miles) wide, it’s also easy to soak in all the architecture by simply spending an afternoon walking around the island.

In the evening, though, it’s all about the music. Known for its annual jazz festival, Saint-Louis has rhythm flowing through its veins, and every night there is live music of some sort. Ask at Ndar Ndar music and café for where to go that evening. 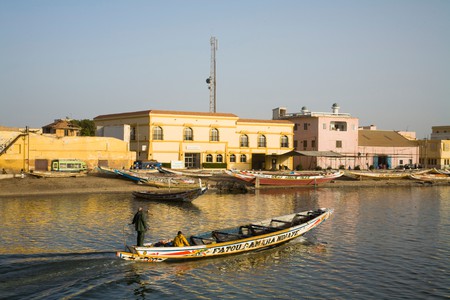 When the Dakar Rally was still based in Africa, the Grande Côte played host to the final leg on numerous occasions. Weatherworn bikes, quad bikes, cars and lorries would bound down the uninterrupted coast from Mauritania to Lac Rose without ever leaving the beach. For about £80, companies like Sahel Découverte will drive you in a four-by-four down the beach the whole way between Saint-Louis and Dakar. No traffic, just tyre tracks through the sand. For those on a smaller budget, local buses, coaches and sept-places taxis (seven-seater minibus taxis) make the route along tarred roads. 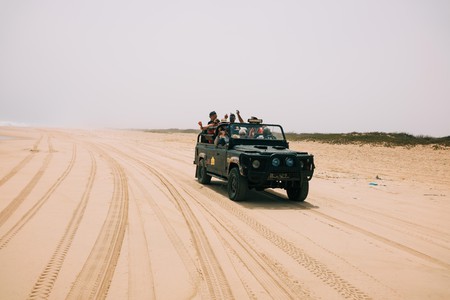