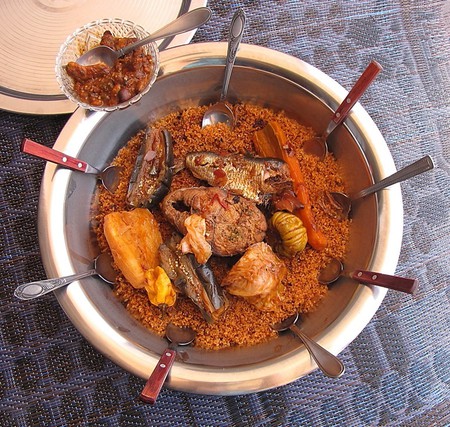 Heavily influenced by North African, French and local culinary traditions, Senegalese cuisine is a beautiful mish-mash of flavours, serving up a rich and varied menu that will tingle the taste buds. Here are a few traditional dishes you can’t leave Senegal without trying.

Pronounced ‘cheb-o-jen’ and often referred to as chebu jen, ceebu jën or simply tcheb, thiéboudienne is the quintessential Senegalese dish. Literally translating as ‘fish with rice’ in Wolof, Senegal’s national dish comes in all shapes and sizes with recipes and techniques varying from family to family. At its core: a piece of fried or grilled local white fish, fluffy seasoned rice and a flavour-rich tomato sauce, accompanied by a varying phalanx of steamed vegetables such as carrots, sweet potatoes, manioc, aubergine and a sweet-sour tamarind called dahkar.

Originating in the northern city of Saint-Louis, this hearty, inexpensive meal has become a mainstay of coastal Senegalese menus, while its meaty cousin, ceebu yapp, tends to be found further inland. Like with many traditional dishes, the best tcheb is often found in the smaller, shabbier, family-run restaurants where prices can be as low as 1,500 CFA ($2.65).

In the 1960s, Senegal exported almost a quarter of the world’s peanuts. Today that figure is around one percent, but the humble peanut still dominates Senegalese agriculture and is sold in bags and recycled bottles on nearly every street corner. No surprise, then, that it’s the principal ingredient in one of Senegal’s best-loved dishes: mafé. 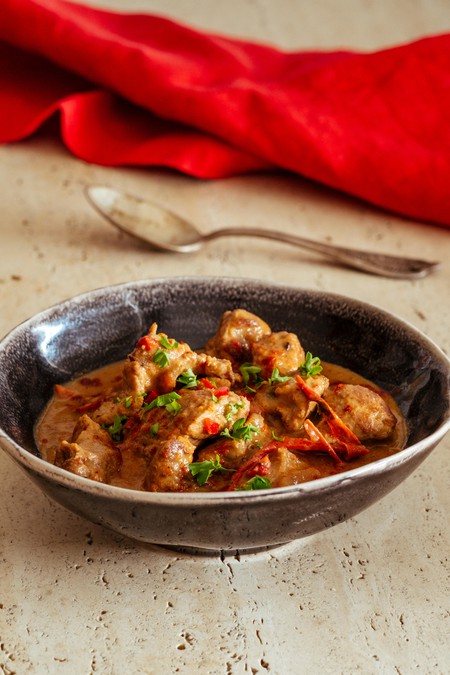 Usually made with beef, but occasionally with lamb, chicken or vegetables, mafé is a spicy stew with a tomato and ground-peanut base. Served with rice, variants of mafé are common across West Africa, but the Senegalese version tends to be thicker, oilier and richer in flavour. It may not look much, but let your taste buds be the judge – at around 2,000 CFA ($3.5o), your wallet will be pretty pleased, too.

You smell a good BBQ before you see it and dibi is no different. The sizzling scent of smoked meat fills the air as lamb (and sometimes another meat) is seasoned and roasted on large, wood-fired grills, before being hacked to pieces and served in bite-sized chunks on grease-stained paper. Smothered with grilled onions in a tangy-mustard sauce and often accompanied with alokko (fried plantain), attieké (manioc couscous) or chips, dibi is the Senegalese equivalent of a Turkish kebab without all the salad nonsense.

Ordered by the kilo and served on large sharing platters with no knife or fork in sight, dibi is a favourite among groups of Senegalese, who either pick up a takeaway from their local dibiterie, or dine out at specialist dibi restaurants such as Seoul 2 and Xhorbi in Dakar, where a couple of kilos won’t exceed 6,000 CFA ($10).

Senegalese restaurants that don’t serve yassa are few and far between. A simple, yet delicious concoction of lemon juice, caramelised onions and garlic (and sometimes mustard), yassa is omnipresent in Senegal. Most commonly served over chicken or fish with a side of rice, yassa has also infiltrated the street-food scene with vendors selling yassa-filled baguettes at football stadiums, roundabouts and beaches. 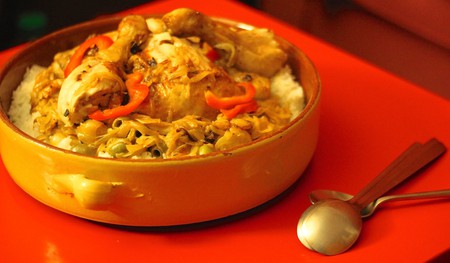 Senegal is flush with treats from the Atlantic. From prawns (crevettes), oysters (huitres) and urchins (oursins) to tuna (thon), sea bream (dorade) and monkfish (lotte), coastal Senegal is a seafood-lover’s paradise. However, one catch stands above the rest: Senegal’s national fish, thiof.

A white grouper, thiof is the Wolof name used by the Lébou fisherman of north Dakar, who have long made a living from this iconic fish. A large, meaty, white fish that is best served grilled (when on the beach) or stuffed with spices and vegetables (when in a restaurant), thiof can also make an appearance in the ‘ultimate Senegal’ thiéboudienne. Although usually the most expensive fish on the menu (around 6,000 CFA ($10), thiof is double the size of the competition and can easily fill two stomachs. Head to Ile d’Ngor for some of the freshest and cheapest in Dakar. 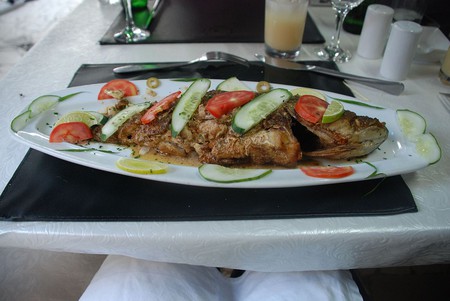 Is it a samosa? Is it an empanada? Is it a British-style chip butty? It’s all of those and then some. In its essence, fataya is a synonym for deep-fried deliciousness. Sometimes they take the form of parcels stuffed with spiced meat. In other places, they are edible receptacles filled with chips, fried eggs and chilli sauce. Always salty, always filling, fataya is the perfect late-night/early evening snack.

However, there are a number of pretenders to its fast street-food crown. Spring rolls (nems) have been warmly adopted from Vietnam; the intoxicating whiff of beignets (sweet, fried doughnuts) can coax hunger to the most sated of mouths; warm and spicy nambe (a lentil-bean stew) is slathered into baguettes on street corners. Like many countries, in Senegal you don’t even need to enter a restaurant to get a great meal.

Okay, so bissap is not a dish, but you can’t go to Senegal without trying its most popular beverage. A sweet drink made from hibiscus flowers, bissap has the same blood-red appearance of Ribena and a taste not too dissimilar. Found prepared in every restaurant or supermarket, bissap can also be easily made at home by buying hibiscus flowers at the market and adding them (and sugar) to boiled water, before chilling. In a country where 95 percent of the population are Muslim, juices are ubiquitous, with other firm favourites including ginger, tamarind and bouye (pronounced ‘bwee’; the fruit of the baobab tree). 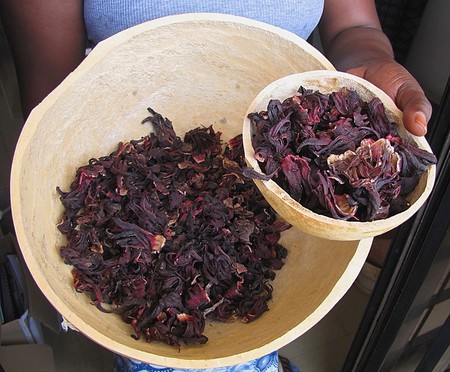