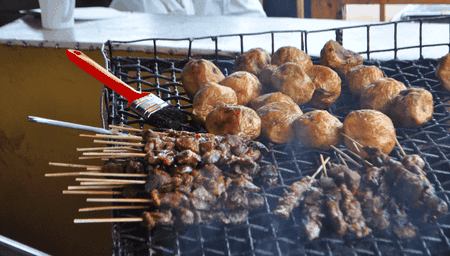 Rwandan cuisine is an exciting mix of local delicacies and regional delights – and there’s no better place to indulge in the country’s unique food scene than in the capital, Kigali. Explore the dynamic city with this handy guide to the best local delicacies and where to eat them.

Food is a key part of Rwandan culture – so it makes sense that one of the best ways to discover the culture is through its food scene. Popular dishes are generally simply prepared with fresh, local ingredients full of flavour, and many are adaptations of dishes from around East Africa. For an authentic experience, head to one of the city’s many casual bars and restaurants, and share a meal with friends or family.

If you want to truly explore the city like a local, sign up for a food tour with local tour company Go Further. “We use cuisine as a lens to explore Rwandan culture,” says Xavier Curtis, local foodie and founder of Go Further. “We spend the evening in the cool Remera neighbourhood, discovering the best spots to eat beans, chapati, sambusas, a rolex (a type of chapati), brochettes, grilled bananas and more, as well as a selection of local beers.” 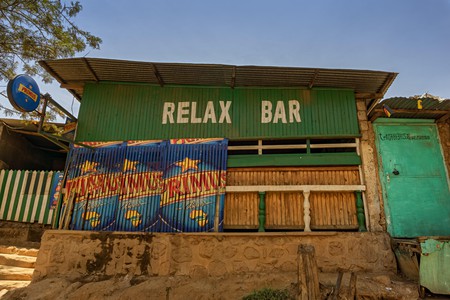 Head to Nyamirambo, Kigali’s Muslim quarter, for the local speciality ‘big fish’ – a whole tilapia simply grilled and served with onions, celery, garlic and carrots. Each fish is big enough for two or three people to share and takes around an hour to prepare, so it’s a good idea to order ahead. “The most fun night to eat big fish is Friday night – Nyamirambo is pumping,” says Curtis, who recommends visiting either Green Corner or Piano Bar. “Like with most Rwandan food, you eat with your hands – and the best spots keep the eyeballs in!”

These meat skewers cooked over a charcoal grill are one of the most popular dishes in Rwanda. They can be made with beef, goat, fish or even pork which is generally mixed with white onion and other vegetables and spiced with chilli. There is some variation on the menu at most restaurants – but one of the best places to discover this quintessentially Rwandan dish is, unexpectedly, a car wash. Car Wash Grill & Sports Bar (also known as Royal Car Wash) is a casual open-air bar – and car wash – that specialises in brochettes served with fries and salad at an affordable price. For the more adventurous traveller, head to Rosty Bar & Club in Kisimenti for zingalo – a type of brochette made from goat offal.

Back in the 1950s, a tiny silver fish known as sambaza was introduced to Lake Kivu, on the border of Rwanda and the Democratic Republic of the Congo. Today, the little sardine-like fish are found on menus at restaurants near Lake Kivu and throughout Kigali, often served as a starter for the table to share. The fish are lightly battered in wheat flour, deep fried, and served whole with a squeeze of lemon, a dipping sauce (most popularly mayonnaise) and a dash of spicy pili pili. “Hands down the best place for this is Repub Lounge in Kimihurura,” says Curtis. “Once you start eating them you can’t stop – they might be tiny but they’re packed with flavour.” 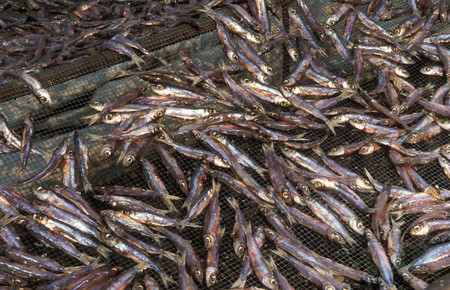 This popular dish, which originated in the Democratic Republic of the Congo before making its way to Rwanda, is made by pounding cassava leaves to a paste-like consistency and then boiling them until tender, before cooking with onions, various vegetables, peanut butter and beef or chicken stock. The result is a delicious, earthy stew, which is traditionally served with beans or rice on the side. During a visit to Kimironko market, vendors prepare isombe using both traditional pounding and more modern, mechanised methods.

For lovers of spicy food, reach for the akabanga. This hot chilli oil is made from tiny yellow chillis and can be found in almost every restaurant and home kitchen. Be warned though: it has a serious kick, so use it sparingly. A few drops is all that’s needed. “The most famous brand of akabanga, found in pretty much any Rwandese restaurant, is by Sina Gerrard,” says Curtis. “This infused chilli oil comes in a little bottle that resembles an eye-dropper. Just add a few drops and get ready for some fire.”

Banana beer – known as urwagwa – is a traditional East African tipple, popular in all rural areas but also found in Kigali. It’s generally home-brewed and is made from crushed bananas, which are buried underground to ferment, with sorghum added as a source of wild yeast. This traditional skill is usually passed down from father to son. Rwanda’s Volcanoes National Park, Red Rocks Rwanda hostel and cultural centre offers banana beer tastings, or for visitors exclusively to Kigali, head to Heaven Restaurant. 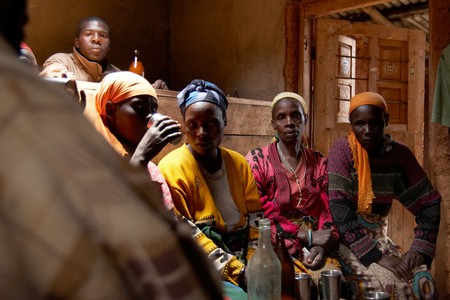 Home-brewed and made from crushed bananas and sorghum, urwagwa is buried underground and left to ferment | | © simon de glanville / Alamy Stock Photo

For a true slice (or glass) of Rwandan life, there’s nothing better than a milk bar – small cafés selling nothing but fresh and fermented milk, known as ikivuguto, served with small snacks, such as fried pastries, chapatis and boiled eggs. “I like to seek out a milk bar owned by an individual rather than one of the franchises, like Milk Zone or Inyange,” says Curtis. “You’ll likely see a number of motaris (moto drivers) as well as folks coming to get takeaway milk for their homes.” The independently run Kuruhimbi in Kimisagara is a local favourite.

The origins of this dish of barbecued pork topped with lime are unknown, especially given that pork isn’t a particularly popular meat in Rwanda. Rumour has it that it takes its name from Mercedes Benz – although exactly what the connection is remains a mystery. It can be found on menus in the hip Remara neighbourhood – a popular hangout for local musicians – and those in the know say the very best akabenz is served at Come Again Bar and should be enjoyed with a cold beer.

These short, starchy bananas – also known as East African Highlands bananas – are cooked when they are still green and unripe and prepared in a variety of ways. Umunyinjye is the rather laborious process involving steaming matoke wrapped in its own leaves and then mashing it; but it can also be simply boiled and mashed, or used in the same way as potatoes are used in stews. It’s found in some form or another on most menus in the Rwandan capital. Sundowner in Kimihurura is a good bet for matoke, alongside other local specialities. 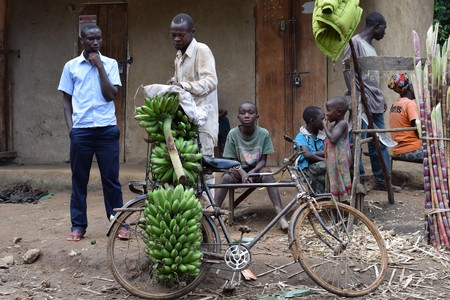 Coffee was introduced to Rwanda by missionaries over a century ago. Today, there are around 450,000 small growers across the country and Rwandan arabica coffee is some of the best in the world. If you need a caffeine hit in Kigali, head to either Inzora or Question Coffee. “Inzora is a special spot for a quiet coffee with a gorgeous view – and don’t miss eating one of Kate’s amazing baked goods,” says Curtis. “Question Coffee is more like a hipster coffee shop you might find in Brooklyn.” Question Coffee is a women’s cooperative, supporting over 30,000 Rwandan female coffee farmers, and also runs tasting workshops and farm tours.

This is an updated version of a story created by Leah Feiger.