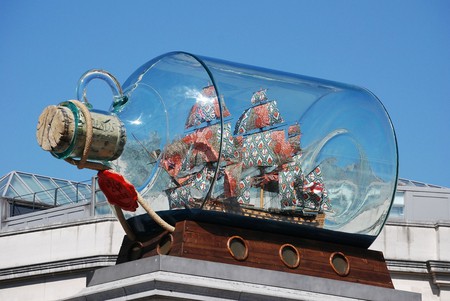 Yinka Shonibare is a British-Nigerian artist and Member of the ‘Most Excellent Order of the British Empire’ (MBE). His artistry encompasses painting, sculpture, photography and film, where he seeks to explore issues of race and class. His works are internationally renowned, especially for his use of vibrant coloured ‘African’ batik fabric (produced by the Dutch) – commonly called Ankara material in West Africa – which he employs to question the meaning of cultural and national definitions in his works. Here’s everything you need to know.

Yinka Shonibare was born in London on August, 9 1962. He spent his first few years here, before moving to Lagos, Nigeria at the age of three, where his father practised law. Years later, he returned to London to study Fine Art at Byam School of Art (now Central Saint Martins College), before studying for his MFA at Goldsmiths College where he graduated as part of the Young British Artists generation. This experience of living on two continents with varying traditions and cultures has been highlighted as an influence and catalyst for his works in exploring cultural identity, colonialism and post-colonialism in the context of globalisation. 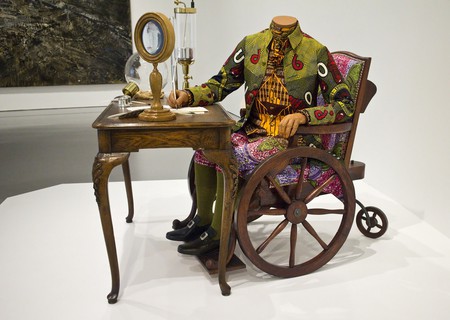 Also known as ‘Eko’ throughout Nigerian history, Lagos is a metropolitan city and former capital of Nigeria. Home to about 21 million people, it’s also the most populous. Lagos is a cultural hub where different people and varying ethnicities from all over Nigeria migrate to pursue their dreams of a better life in the country. It was in this urban city that Yinka Shonibare MBE spent his formative years before returning to London for further studies around the age of 17.

Coming full circle, in 2016 Shonibare had his first solo presentation in Nigeria commissioned by The British Council (the UK’s international organisation for cultural relations and educational opportunities). The first ever outdoor sculpture in Nigeria, titled Wind Sculpture VI, a fibreglass work six metres (19.7 feet) high by three metres (9.85 feet) wide, went on display in the Ndubuisi Kanu Park in Ikeja, Lagos as part of the British Council’s UK/Nigeria 2015-16 season, which aimed to build new audiences, create new collaborations and strengthen relationships between the two countries.

Goldsmiths College is a southeast London based university specializing in the study of creative, cultural and social subjects. Founded in 1891 as Goldsmiths’ Technical and Recreative Institute by the Worshipful Company of Goldsmiths in New Cross, London, it was later acquired by the University of London in 1904. It’s at this institution that Yinka Shonibare MBE received his MFA – in 2003, he became an Honorary Fellow. 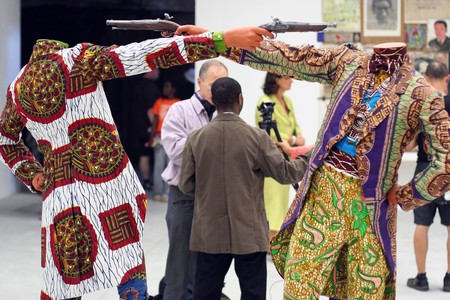 Also known as Brit Artists, the Young British Artists were a group of visual artists who started exhibiting together in London, in 1988. Many of the YBA artists graduated from the BA Fine Art course at Goldsmiths, in the late 1980s. These artist-led exhibitions were typically held at warehouses or factories. Shonibare’s work was included in the 1997 traveling exhibition Sensation: Young British Artists from the Saatchi Collection.

At the age of 18, and a month into his studies at Byam School of Art, Shonibare contracted transverse myelitis, an inflammation of the spinal cord which left one side of his body paralysed, resulting in a long-term physical disability.

In 2013, he was announced as patron of the annual exhibition by Shape Arts, a London-based arts charity funded by Arts Council England that is committed to providing opportunities for disabled individuals wanting to work in the arts and cultural sector. The exhibition invites disabled and non-disabled artists to submit work in response to an open theme. 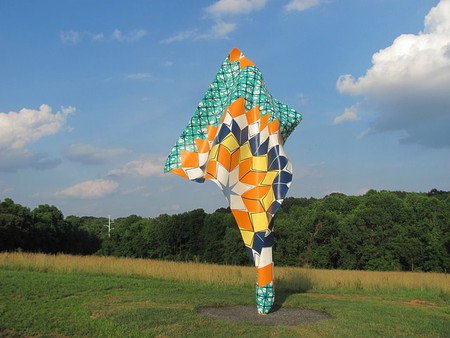 Documenta 11 was the eleventh edition of a contemporary art exhibition of the same name held in 2002 between June, 8 and September, 15 in Kassel, Germany. At the time this showed Shonibare’s most notable work, Gallantry and Criminal Conversation, commissioned by Okwui Enwezor, which catapulted him unto the international stage.

Museum of African Art at the Smithsonian Institution

Founded in 1964 and located on the National Mall at Washington D.C, The National Museum of African Art is the only national museum in the United States dedicated to the collection, exhibition, conservation, and study of the arts of Africa.

Shonibare toured the institution in October 2009. In 2016 on December, 3, one of his painted fiberglass Wind Sculpture pieces was the first sculpture to be permanently installed in front of the Smithsonian’s National Museum of African Art entrance. 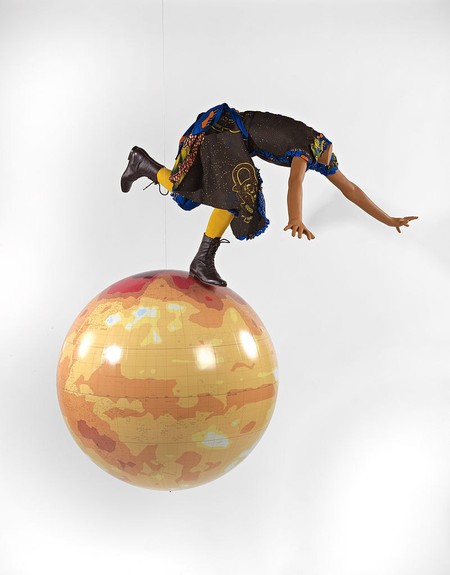 Other commissions in London

From 2010 until January 2012, Nelson’s Ship in a Bottle was the Fourth Plinth Commission displayed in Trafalgar Square, London. It was the first commission by a black British artist and was part of a national fundraising campaign organized by the Art Fund and the National Maritime Museum.

In 2014, Doughty Hanson & Co Real Estate and Terrace Hill commissioned Wind Sculpture installed in Howick Place, London. It measures six metres (19.7 feet) by three metres (9.85 feet) , and explores the notion of harnessing movement through the idea of capturing and freezing a volume of wind in a moment in time.