A depiction of a futuristic Lagos with improvised shanty megastructures | © Olalekan Jeyifous / Vigilism.com

Imagine a Lagos in the future – where every neighbourhood possesses towering skyscrapers and ‘streams’ calmly flow beneath the endlessly sprawling walkways of some of the streets. Cable cars become a normalised mode of transportation, and boats are regularly employed to navigate the waterways. Welcome to Olalekan Jeyifous’ attention-grabbing, issue-driven, and unintended dystopian depictions of a futuristic Lagos. 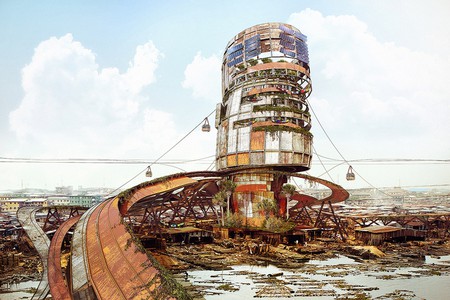 Olalekan Jeyifous’ Improvised Shanty Megastructures uses images of fictional megastructures, constructed in the most unconventional forms, to force urban developers to rethink urbanisation and innovation, particularly as they affect the less privileged communities in Nigeria. The Nigerian artist and designer is based in Brooklyn, New York, and holds a Bachelor’s degree in Architecture. His images show fantastical cylindrical buildings in Lagos, made out of wood and melds of various metals that seem to hardly catch even the harshest of sun rays during the day, but which mildly light up at dusk.

Jeyifous’ images fuse ultramodern architecture hinged upon affluence with the overlooked architectural innovations inspired by survival that are visible in poor communities everywhere. The results bear a sociocultural significance that is impossible to ignore in today’s world obsessed with urban development that remains insensitive to the poor.

The Improvised Shanty Megastructures originate in Makoko Village, Lagos. A water community that has been referred to as Venice’s much less attractive counterpart, in reality it has every potential to emulate the famous Italian city. Makoko has made countless headlines across the world, highlighting its socioeconomic promise and problems. The water city consists of slum communities and unconducive living conditions, and yet its inhabitants have exhibited a shocking resilience and determination to survive on scant resources. Particularly through the erection of the floating structures which Makoko is famous for, in addition to the preservation of their sources of livelihood and other sociocultural activities. 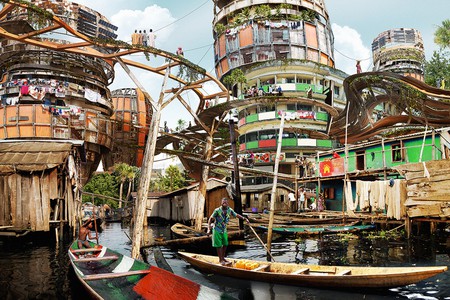 A futuristic depiction of a canal in Makoko village | © Olalekan Jeyifous / Vigilism.com

Sadly, rather than recognise their existence and extend social aid and development their way, the Lagos State Government has repeatedly attempted to obliterate Makoko’s existence and consequently displace its inhabitants. Makoko Village operates just like any other community in Lagos, although such operations are limited by the absence of adequate infrastructures. The residents of Makoko Village have a means of livelihood, run a traditional market system, and try to send their children to schools within their communities. And they continue to achieve all of this through innovations spurred by necessity, with little to no help from the outside world.

As the water city continues to grow and expand its geography, Jeyifous seeks to score deserved visibility and attention to it and other communities like it in Lagos, Nigeria, and the world. Jeyifous’ shanty megastructures in Makoko village may be fictional creations, but they are solidly grounded in the present reality of failed efforts to reconcile what is socially acceptable urban development, with the places and people this phenomenon should include. 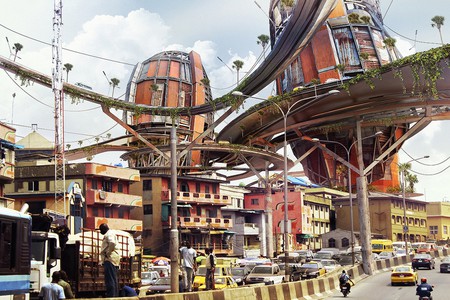 Some of Jeyifous’ works, showing a futuristic Makoko, feature its popular shanty structures – albeit in exaggerated architectural dimensions, garnered from the combination of different pictures and views of its water communities. He then goes on to transplant these 3D-modelled, giant shanty structures to Lagos neighbourhoods, such as Lagos Island, where they would usually never be found. 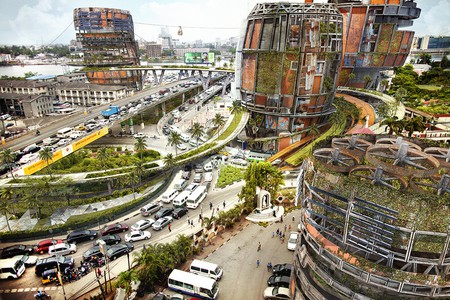 The objective in this case is two-fold. Firstly, to draw the jarring picture of how urban development solely caters to and favours those who can afford its lavish provisions, leaving the less fortunate to wallow in unhygienic and underdeveloped environments. Secondly, to include the poor. According to Jeyifous, the effort is actually of symbiotic benefit to those involved. Because when urban planners and developers include poor communities like Makoko in their projects, they are also learning about the implementation of striking sustainable and innovative practices. Practices such as managing and repurposing useful materials, helping informal economic systems improve and better serve their purpose, as well as maintaining their cultural ecosystem.

In Olalekan Jeyifous’ Lagos of the future, urban development would not only reflect the needs, tastes, and comfort of the wealthy, but the steadfastness of those who strive to create in a vacuum and manage to exist and support themselves on the results.