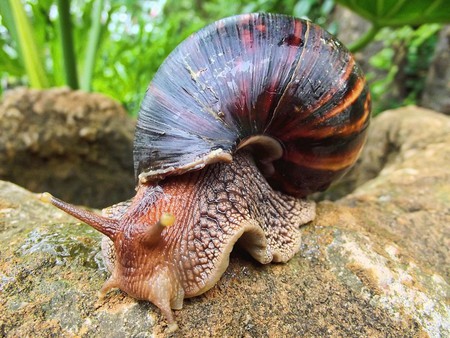 When you see snails stuck to a tree branch, hiding under stones or leaves, or being sold in the market place, what impression do you have of them? Well, snails—popularly referred to as ”Congo meat” in Nigeria—are rapidly becoming a highly-valued export commodity for Nigerian farmers who have the foresight to tap into a lucrative business opportunity.

Snails provide an important source of animal protein—being naturally loaded with vitamins E, A, K, and B12—as well as pharmaceutical properties for the production of certain drugs because of their therapeutic constituents and also providing beauty benefits for the cosmetic industry. The importance of the snail is well acknowledged in European countries like France, Italy, United Kingdom and Germany, also in America and Asia. It has low fat and cholesterol, which is widely accepted for special needs medical patients, and also helps in fighting cancer and preventing heart disorders.

Now that's a snail! Duty manager, Chavonne, shows us just how big this giant African land snail really is when she spotted it crawling across her verandah recently. These sluggish creatures are rather prolific, but they are most active at night so we don't see them all too often. They are known to live to about 5 or 6 years old and they lay up to 1200 eggs a year! Strangely enough, these snails do mate to reproduce but they are also capable of reproducing on their own. They are herbivores and eat a wide variety of plant matter. What an interesting visitor! #tshukudugamelodge #tshukudu #southafrica #snail #giantsnail #giantafricanlandsnail #safari #travel #wildlife #adventure #explore #travelpics #wowsouthafrica #travelsouthafrica #Africa #travelafrica

Oluwatobiloba Ohioma-Belo, an entrepreneur in the snail trade, revealed that quitting her events planning job to invest in snails was the best career move she has ever made. The entrepreneur is in the business of sourcing snails from farmers in Lagos, Nigeria, and selling them to clients both locally and internationally.

For many years, the slime secreted from the giant African land snail (the most common species in Nigeria, also called African land tiger snail) has been employed by traditional medicine practitioners in the treatment of asthma and hypertension. But a recent study by Spanish and US researchers has demonstrated that the mucus secreted by snails is full of collagen, glycolic acid, antibiotics, and other compounds that regenerate skin cells and heal cuts.

“Because of its amazing benefits, not just nutritional benefits, but other benefits, for instance the slime now, it is being harvested massively and used in cosmetics and pharmaceutical products. It has rejuvenating properties and helps with skin regeneration,” said Oluwatobiloba Ohioma-Belo.

In line with the Federal Government of Nigeria’s diversification plan and emphasis on using agriculture as the vehicle to drive the country out of its current economic downturn, Nigerian company Wolegate Global Resources Ltd has discovered a unique method that will wake up snail farming and make it lucrative and sustainable as a business venture in the country.

Prince Adewole Adeyanju, the CEO of WGRL said, “The company—a franchise of Touchstone Snail Technologies Limited Cyprus—is introducing a new technique with which Nigerians can rear and earn great profit within a nine-month growth circle (against the usual three years of harvesting), using a special species of snail (Helix Aspersa Muller), and a more creative farming method, called ‘curtain method.’ With its introduction into Nigeria, we are set to revolutionize snail breeding, make it a highly sustainable agro-allied business for export and a job creation mechanism.”