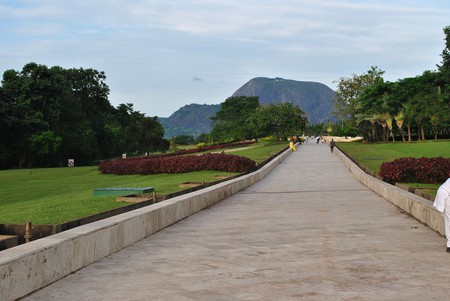 Aso Rock is the largest and highest rock in Nigeria’s capital city, Abuja. Standing at about 1,300 feet (400m) above sea level, it is Abuja’s most noticeable feature. The three major seats of power of the Nigerian Federal Government are the Presidential Villa Complex (a.k.a. Aso Villa), the National Assembly, and the National Supreme Court, and all three encompass the rock. Aso Rock also has many myths and legends surrounding it. Here are few to note.

It is a place for worshipping deities

The Gbagyi people of Asokoro, who were the original occupants of the city now known as Abuja, are a unique people that were the largest among the ethnic groups to inhabit the area. To this day they conduct their yearly festivals at Aso Rock, which takes place before and after the rainy season, offering animal sacrifices to the gods. This is a local tradition that has remained unaffected by the societal changes over time. It is said that the people pay homage to the deities of Aso Rock to keep them healthy and prosperous. 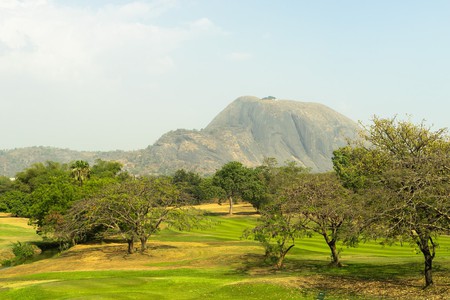 It is an undefeated battle territory

In the Gbagyi dialect, the word ‘Aso’ means victory. According to the villagers, the Asokoro people have never been defeated in war since the beginning of their history. It is said that whenever there is an invasion, the villages around and on top of the mountain would be thrown into pitch darkness making it impossible for the enemy to fight. In this way, the Gbagyi people have become famous for their love of peace, transparency, and accommodating spirit. There’s an old saying in the Hausa language that speaks of their ways; ‘muyi shi Gwari Gwari‘ meaning, “let’s do it like the Gbagyi” or “in the Gbagyi way.”

One must seek approval to hike up the Rock

One popular myth says there are local priests who reside in the villages who look after the rock and it’s often said that to hike the famous rock or enter any of its many caves, one would need to get permission from the priests first to ensure a successful climb.

Being greedy is taboo

A remarkable tale told by the Gbagyi people is that there is a pond at the top of the rock that never dries up. This pond is treasured by the villagers because of its unique cold and clean water running all seasons. The Gbagyi people believe that you should only take a portion of the water you’re able to finish, and anybody that fetches the water and spills or throws it away will be put under a curse by the Asokoro gods. The Gbagyi people are afraid of offending the gods, who they believe have protected them all, therefore they are known to shun greed.

Local villagers claim that there are over 10 caves in the rock, however not all are accessible due to the thick forest surrounding them. There are no stairways or any other means of accessing the area. A number of hiking groups in Abuja have successfully hiked the rock, but it is advisable to go along with an experienced mountaineer who is familiar with the territory to fully enjoy the experience.