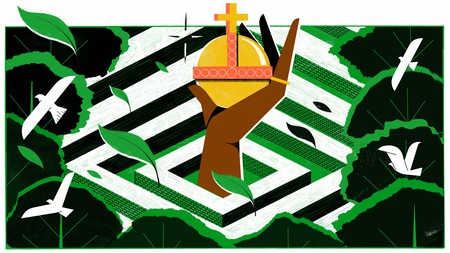 In Nigeria, Africa’s largest monument is having a renaissance, as locals and tourists revisit the ancient ruin that lay undiscovered for centuries.

Second in size only to the Great Wall of China, Sungbo’s Eredo in Ijebu-Ode is a staggeringly impressive hand-built system of defence walls dating back to around the year 1,000 and located just an hour’s drive from Lagos.

The name ‘Sungbo’ is attributed to an Ijebu noblewoman named Oloye Bilikisu Sungbo who, as legend has it, was actually the Queen of Sheba according to biblical and Quranic accounts. A wealthy and industrious widow who was greatly revered by her people, Oloye Bilikisu Sungbo built this monument as a personal memorial. It is located in close proximity to her grave in Oke-Eiri, a town north of the Eredo which pilgrims continue to visit to this day. As historian Ed Emeka Keazor observes, “Oloye Bilikisu Sungbo essentially ordered this to be built as a monument to her greatness because she was childless and, in traditional society, a child is seen to be the ultimate preservation of your legacy. Because she didn’t have a child, she wanted something built as a reminder of her stature as an accomplished woman.” 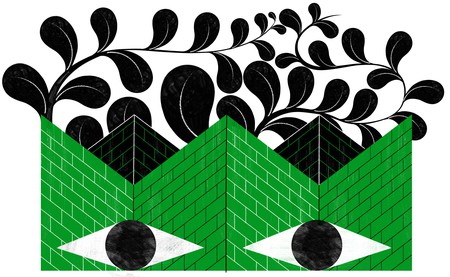 It is a site that elicits both mystery and curiosity since its discovery in 1999 by the late British archaeologist, Dr Patrick Darling. Since then, much attention and debate has centred around its existence and, indeed, its purpose. Why did Oloye Bilikisu Sungbo commission Sungbo’s Eredo and how, as the largest man-made structure in Africa, did it remain largely unknown outside of its community until Darling’s discovery?

Darling estimated that Sungbo’s Eredo “covers 2,500 square miles (6,475 Square kilometres) and consists of more than 500 interconnected communal enclosures and that most of the complex was built progressively over a 450-650-year period – from between AD 800 and 1000 up until the late 15th century, when much of the area was conquered by the Benin Empire”. It’s also suggested that the wall system not only served as a defence mechanism, but was built as a way to unify an area of diverse communities into a single kingdom. Sungbo’s Eredo consists of a 10,000-mile(16,000-kilometre)-long series of ramparts naturally camouflaged by patches of moss and partly concealed within the rainforests of the region.

Carbon-dating suggests the monument is over a thousand years old, but as scholar Tunde Oduwobi argues, “results obtained in dating Sungbo’s Eredo have been disparate leading to suggestions that the Eredo is a prehistoric monument… but certainly, a whole lot more scientific and holistic investigations still need to be carried out”.

Sungbo’s Eredo mirrors the construction process of similar defence systems found in Nigeria, including the ancient walls of Ilé-Ifẹ̀, Ilesa and the infamous Benin Walls (called Iya in the Benin language). The latter was, at one time, the largest man-made structure in the world, with 6,500-kilometres of ramparts ranging in size from shallow trenches to gigantic 20-metre(65-feet)-high walls once surrounding ancient Benin City.

Even through Sungbo’s Eredo has been listed as a UNESCO Heritage site since the 1 November 1995, it is still not on the radar for many history-lovers, or even widely visited by Nigerians. The site is a testament to the early engineering innovation of an indigenous population and speaks of one woman’s legacy, vision, prowess and ambition that has stood the test of time. A pre-colonial architectural and engineering feat, Sungbo’s Eredo must face future preservation challenges – including environmental changes, tourism footfall, daily wear and tear to the ramparts – while balancing the need to educate, stay open and remain accessible to all.

The best time to visit Sungbo’s Eredo is during the dry season and, as the trail leads deep into the forest, loose, comfortable clothing and walking boots are recommended. Avoid visiting during Easter-time, as this is when pilgrims flock to the area to pay tribute to Bilikisu Sungbo. Hiring a tour guide is essential as the Eredo is virtually impossible to discover without the aid of someone who knows it well.