Adolphus Opara’s large-format, painterly images of diviners from regions of South-western Nigeria, displayed at the CCA in Lagos in early 2013 and covered in Contemporary And, reveal the potency of Yoruba religious traditions. 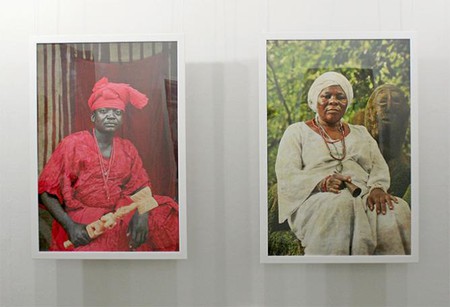 Adolphus Opara rattles the conscience of Africans with many questions, and uncovers hidden truths without knowing it, in his first Nigerian solo exhibition titled Emissaries of an Iconic Religion held at the Centre of Contemporary Art (CCA) in Lagos. In this pictorial feast of fifteen portraits, he engages the audience in a dialogue about the relevance of traditional beliefs within contemporary society.

Life in African modern society in some cases runs like a typical Nollywood movie (name given to Nigerian movie industry); for example when a woman has difficulties with childbirth she seeks medical expertise, before going to the church for answers when the hospital seems to fail, and when she has run out of patience with the church, local diviners become her last resort. Another example can be seen when a man is thrown into the jaws of harsh financial times after failing to hold down a job or succeeding at business, out of frustration he surrenders himself to the financial deliverance service of the church and when the dividends of this exercise seem too slow, he heads off to the rural areas to consult the deity of wealth. Centuries of missionary activity in Africa, coupled with the recent growth of the Pentecostal movement, has not changed this lifestyle, even with the number of shrines that have been burnt or abandoned. 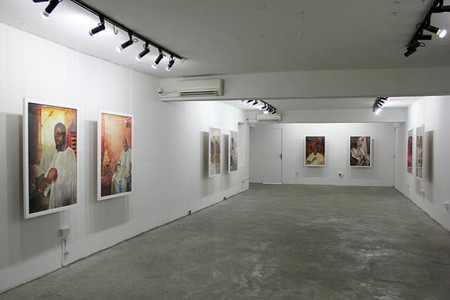 So Adolphus Opara’s large-format, painterly images of diviners from regions of south-western Nigeria do not only invoke the symbols and narratives of indigenous religious belief, as well as its relevance and function within the community, but also remind us of how at desperate times Africans turn to the same traditional ideologies that they have kept at arm’s length or completely denied.

Opara’s training as a photojournalist has seen him focusing on the human stories he encounters on his travels throughout Nigeria and West Africa. His attention to detail influenced by the rising modernist art genre of portraiture, can be seen in the pose of each diviner, and in the emphasis on indigenous, religious and traditional contents such as effigies, masks, embellishments, paraphernalia of traditional and religious activities (bells, gongs, statuettes and others) which add to the mystical quality to each image. Opara also documents the names of each diviner dressed in either red or white, and the Orishas (gods) each represents. 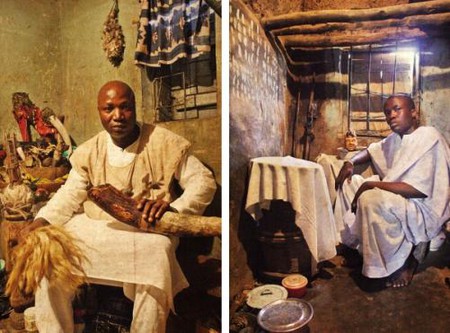 The Yoruba traditional religion is an iconic combination of processes of human spirituality that encompasses a set of narratives, symbols, beliefs and practices. They reflect the practitioner’s experiences of life through reference to a higher power, Olodumare, and the belief in a multitude of spiritual deities. These deities attend to different needs of human life, like Orisha Lajoomi (deity of children), Orisha Odu (deity of protection and blessings), Orisha Egbe (diety of destiny), Orisha Oko (diety of harvest) and Orisha Ifa (deity of every good thing).

The photo-documentation is actually a statement that even if patronage of the traditional religion is at a low, as Africans we can never really forget where we are coming from. Our culture and traditions are stuck with us no matter how much we deny it. Opara, born 1982, may not have noticed it when he was taking the pictures between 2009 and 2011, but this ‘Iconic Religion’like icons remain relevant in our modern society even though fitting in religion has become harder.

Obidike Okafor is a content consultant, freelance art journalist and documentary film maker based in Lagos.

Originally Published in Contemporary And: A Platform For International Art from African Perspectives.