"Fiction is Human Experiences": An Interview With Ayọ̀bámi Adébáyọ̀
From the cover of Stay With Me | Courtesy of Canongate Books
Nigeria / Books

Published last month, Ayọ̀bámi Adébáyọ̀ debut novel Stay With Me has already garnered her a spot on the Baileys Women’s Prize for Fiction shortlist. We caught up with the Nigerian author a few weeks ago at the London Book Fair to discuss the book, and her writing in general. 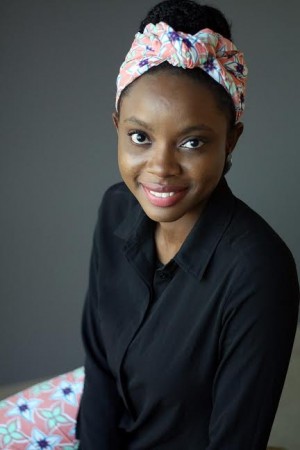 It is my working theory that pacing in fiction is only ever an issue by comparison. One could spend years trudging through the works of, say, Victorian expansionists à la Henry James or George Eliot, and not realize that anything was lacking until confronted by more tempo-conscious classics (such as The Name of the Rose, or Money, for example). Whatever you make of it, the thought seemed rather vindicated at Ayọ̀bámi Adébáyọ̀’s panel appearance at the London Book Fair last month, where her novel’s meticulous plotting garnered quite a lot of attention. I assume getting through the rhythmic developments of Stay With Me somehow reminded the audience that not all literature takes pride in rumination. A similar recognition must no doubt also be provoked by the better specimens of the crime or—dare I say it—thriller genres… although on that point the inveterate purveyor of snob that I am wouldn’t really know.

What is perhaps more remarkable, in Adébáyọ̀’s case, is that the story she’s written doesn’t at first appear to be a natural fit for that kind of plotting: Set in the town of Ilesa in south-west Nigeria, the novel begins by following a young couple, Yejide and Akin, as they navigate their increasingly distressing marriage. An arrangement complete with oppressive extended family, marital intrigue and murky morals, which veers somewhat inevitably towards tragedy and drama. Its initial claustrophobia reminds not a little of Golden Bowl-era Henry James, from the ethical muddles down to the weight of social codes. Yet where James illustrated the stiff pretense of Victorian mores, Adébáyọ̀’s tale is set in motion by the incredible pressure exerted upon the couple, and Yejide in particular, to have children. A pressure, it is worth noting, often imposed upon them over a meal, with feigned innocence and a step-mother’s smiling remark.

When I mentioned this comparison to Adébáyọ̀, she was quick to highlight the importance of moral questions in Stay With Me. “I am interested in seeing how different people can view the same event differently, yet still both have valid views,” she told me. “It brings moral dilemmas.” The kind of dilemmas which lead to unwise decisions, such as marrying a second wife in order to spare the first from harassment, as Akin does: “Having good will and the right intentions doesn’t always translate into good actions. Sometimes people make decisions… and all these unintended consequences come as a result.”

The novel, she said, was also influenced by an interest in writing about “someone in a level of isolation, and finding how that impacts them—how loneliness inhabits the mind.” Yejide is indeed mostly left alone to face her problems, and suffers as a result. Claustrophobia, in James’s work, is very much a stylistic occurrence, but in this book its sources are also of a more social nature. As things progressively gets worse for the character, the narrative tightens around her: “All grief is private, but especially that of child loss. For others, you have their friends and those who knew them to talk to, but when it’s for a four-year-old, there’s no outlet…”

I met Ayọ̀bámi Adébáyọ̀ immediately after her talk at an event hosted by English PEN, amidst the airport-like surround sound of the Fair and the cheerful gait of what seemed to me like mildly eccentric businesspersons. She was as composed and meticulous in conversation as she had been in front of the audience, save perhaps for the intermittent largesse of her laughter (imagine: head tilted back, mouth open). When asked about the plot, again, she was more than understanding: “That just came about, I just finished it and realized that, ‘Oh my god every chapter has to be exactly where it is!’ That’s how it felt towards the final draft, I couldn’t move any chapters anymore because that’s just how the plot would work.”

To get to that point of storytelling refinement, her process was revealed—as one would expect— as quite extensive. “The novel came from a short story in which two characters, husband and wife, were having something like a final argument. Those characters stayed with me, I thought about them for two years before I started writing this book. And so it wasn’t so much the plot that I was thinking about, but the characters… I only started knowing what the novel was about, and was able to talk about it, after two drafts. I can’t plan—and I’ve tried to make a plan for the novel—but I’m just not one of those writers who can plan how their novel is going to go in advance.”

All her fiction, including the short stories which until now formed the bulk of her work, has been composed through comprehensive rewrites. It is a method Adébáyọ̀ says she learned, at least partly, thanks to one of her two mentors, Chimamanda Ngozi Adichie (the other being Margaret Atwood, no less, who taught her at the University of East Anglia). She did a workshop with the writer a few years back: “I have been very lucky—I was probably overconfident until then. I thought my first drafts were the best I could do.”

To that process “the only exception,” she admits, is a very beautiful and poignant short story called ‘Homecoming‘ (of which revealing anything here would ruin your reading experience). “I wrote it in one weekend, it just came to me like that,” she laughs, “I’ve been waiting for something like that to happen since.”

That piece’s meticulous build-up and emotional dénouement reminded me of a chapter in Stay With Me, in which Yejide tells her baby daughter Olamide her own variant of a story she’d heard as a child. It is one where a woman, Oluronbi, promises her daughter away to the king of the trees. Unhappy at the tale’s negative portrayal of Oluronbi, her own version made the woman more sympathetic—she’d promised the child away because it would save her family. “I used to chase my grandma around for her to tell me stories, “Adébáyọ̀ explained, “and this one came from her—it’s a Yoruba tale. I wanted Yejide to retell it, make it her own and identify with it, to understand what would make a mother give up her child.”

There, as in ‘Homecoming’, the prose build towards some inevitable crash—not in the folk tale itself, but what Yejide makes of it. The chapter ends thusly:

“The reasons why we do the things we do will not always be the ones that others will remember. Sometimes I think we have children because we want to leave behind someone who can explain who we were to the world when we are gone. If there really was once an Oluronbi, I do not think she had any children after she lost Aponbiepo [her daughter]. I think the version of her story that survived her would have been kinder if she’d left behind someone who could shape the way she would be remembered. I told Olamide several stories, expecting the one day she too would tell the world my story.”

One discerns just how important her characters are to the novel (not as fatuous a statement as you might think, I promise): Adébáyọ̀’s writing sticks very close to Yejide and Akin, to the point where all the book’s events are filtered through the busy minds of our two narrators. If that goes another inch towards the claustrophobia mentioned earlier, it also brings an interesting rapport with political events. The country’s lively (to put it mildly) history—from Dele Giwa’s murder in 1986 to the 1993 military coup—props at various points alongside the novel’s action, always as a parallel background narrative to the forefront drama, and always through the prism of our narrators.

The novel, she said, might have “started out very political,” but that part was toned down with every successive rewrite. The more she worked on it, the more she thought her characters were too taken with their lives to care so much about these things. Yet her writing, so involved, so fastidious with the charting of what amounts to—ultimately—two very personal journeys, could not do without it: “Fiction is human experiences, I really believe that, and politics is indissociable from human experiences.”