Emerging Nigerian photographer Abraham Oghobase, one of the 2014 Prix Pictet finalists, uses a combination of performance and photography to explore urban identity and the ways that socio-economic dynamics shape people’s lives. Despite dealing with subject matters strictly related to his personal experience and Nigeria, Oghobase has created a body of work that resonate beyond the border of his native country and speak to contemporary issues worldwide. 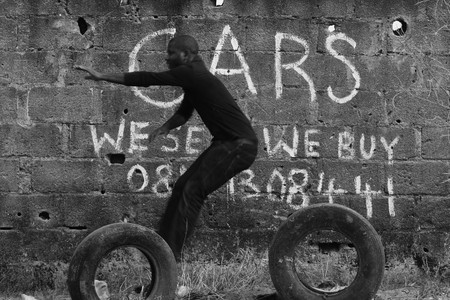 The exploration of identities and human emotions in relation to particular socio-economic contexts is ingrained in the practice of Nigerian photographer Abraham Oghobase. Born in Lagos, Nigeria in 1979, he majored in photography at the Yaba College of Technology’s School of Art, Design and Printing in Lagos before being mentored by French-Algerian photographer Bruno Boudjelal, whose work revolves around research into his own identity within a cross-cultural context.

Oghobase’s work takes the form of photographic series, performances and photo-essays, crossing the boundaries at times between art photography and photojournalism. Jam and Fuel Subsidy Protest are two such series that succeed in capturing the aesthetics of the artist and his social activism when dealing with his subject matters. 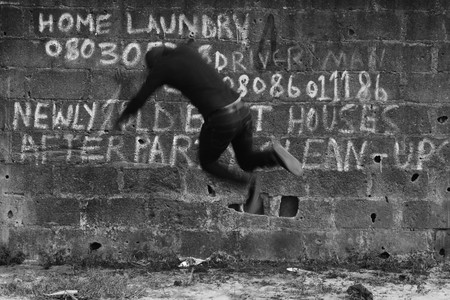 Fuel Subsidy Protest came about when, in 2012, thousands of Nigerians took to the streets to protest against the removal of subsidy on petrol, aggravating the economic situation of many people already living in a country lacking social assistance. The protest escalated in violence before the government backed down and reinstated the subsidy. Fuel Subsidy Protest consists of black and white, aerial photographs that Oghobase shot to document the flow of the people on the first day of the protest.

Jam (2008) looks at the increasing population in Lagos and the imbalance between rural and urban spaces. The impact that economic growth has on a metropolis is a recurrent theme in the Nigerian photographer’s work, especially when addressing the important role that physical and emotional spaces have in shaping individuals and their actions. 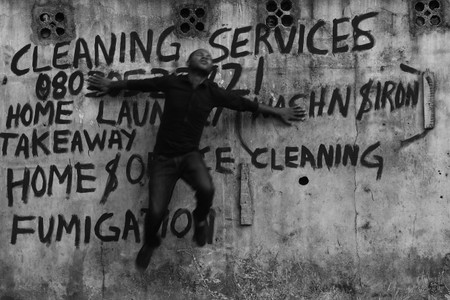 In the past decade, the vibrant economy of Nigeria has led to an exponential population growth in big cities; this, in conjunction with an outdated property market, has accentuated the struggle for space. Stories started to surface of fake estate agencies trying to sell houses to one or more buyers while the owners or tenants were away, forcing desperate owners to spray the walls of their homes with the sign ‘this house is not for sale’.

The photographer depicts this crisis in Jam by photographing portraits of Lagosians standing in front doors of houses beneath the warning sign ‘this house is not for sale’. These images encompass layers of meanings that are both intrinsically related to the time and place they refer to, as well as hinting to similar dynamics in other countries where economic growth and capitalism mould their citizens and pressure them over basic needs like housing. The shots are simultaneously artistic illustrations of a specific group of people and suggestive documents of a socio-economic moment in Lagos. 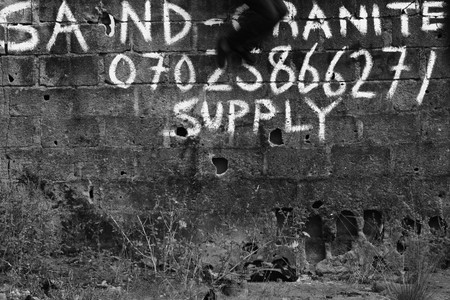 The correlation between space and people continues with the photo-essay Ecstatic (2009), a metaphoric project of photographs and performances by the artist himself.

Oghobase introduces Ecstatic with a statement from former hostage Brian Keenan who was kidnapped in 1986 by the Islamic Jihad while he was teaching in Lebanon – ‘Yes, I want something. I want my freedom, I want to live like a man, I am not an animal.’

As stated by the artist, this endeavour was prompted by intimate questions, “How does one exhale in a demanding and constrictive city where millions of people struggle not just for physical space but also a mental anchor point? When one decides to climb higher than where one is expected to be, then suddenly realises what is promised doesn’t even exist in that space at the top, do you remain there or jump? When one decides to jump, in an ecstatic moment of escape and temporary liberation, where does he expect to land? […].’ The result is a metaphorical and therapeutic performance in which the artist climbs on top of vehicles, to create a temporary space separated from everything and everyone else, until ‘gravity’ brings him back down. During the jump, the body arches and curves to symbolise the struggle for existence in everyday life. 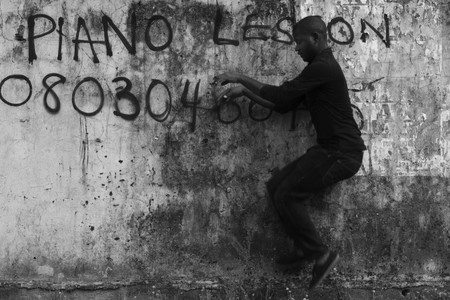 The overwhelmingly oppression from the seemingly unstoppable development of cities not only surfaces in housing or in the streets, which constrict the physical body of their inhabitants, but also through advertisement and information that inundate and disorient the consumers on an emotional and psychological level.

Oghobase explores this theme in the black and white photographic series Untitled 2012. Here he interacts with advertising texts scribbled on walls around Lagos. The abundance of these hand-made ads and services and the information contained in them raises doubts concerning their authenticity and the effectiveness and purpose of fierce marketing methods. For his photographs in Untitled 2012, Abraham Oghobase was one of the 11 photographers shortlisted for the Prix Pictet – Consumption in 2014. 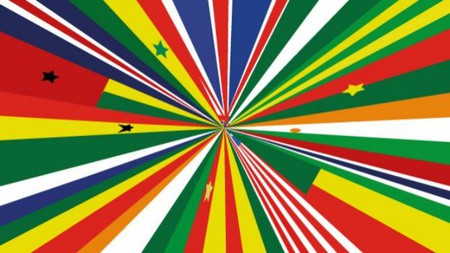 Recently he has been involved in the Goethe-Institut’s three-year project ‘Photographers’ Portfolio Meeting’, and his work was part of the We Face Forward exhibition in Manchester (UK) celebrating the eclectic art, music and culture of West African artists. Abraham Oghobase’s work is also included in the permanent collection of the KIASMA Museum of Contemporary Art, Helsinki.