A Look into Nigeria’s Brutal Boxing Art of Dambe 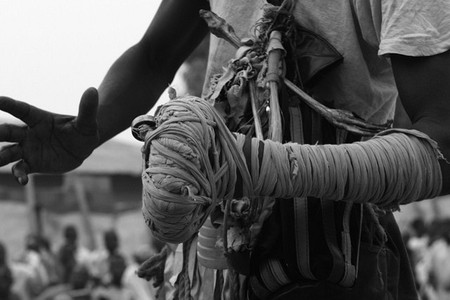 Dambe boxing is an ancient sporting tradition, popular among the Hausa people of Northern Nigeria. The brutal game, lasting three rounds, has the sole aim of beating an opponent into total submission. It is a game of bare-bodied male boxers, who often leave the battlefield with broken jaws, bloodied noses, and cracked ribs. This is Nigeria’s martial art, which is gaining global recognition at home and online.

The origins of Dambe boxing

While no one knows the exact detail surrounding the origin of the sport in West Africa, Edward Powe, a researcher of Nigerian martial culture, recognizes striking similarities to the images of Egyptian boxers from the 12th and 13th dynasties. Muslim scholars claim it arrived in Northern Nigeria sometime between the 10th and 11th century. However, Dambe boxing—also known as Kokawa—started out among the lower class of the Hausa trained animal slaughterers—the Butcher caste group.

The butchers traveled to different villages at harvest, organizing fighting challenges with other butcher guilds from the area as part of the festive entertainment. Subsequently, it became a traditional practice to prepare men for war, and fighters also married wives as a price for victory. In recent times, members use the game as a demonstration of masculinity, as well as a means to acquire personal prestige and earn a living ($556 as a winner of a fight), leading up to bringing honor to their families. 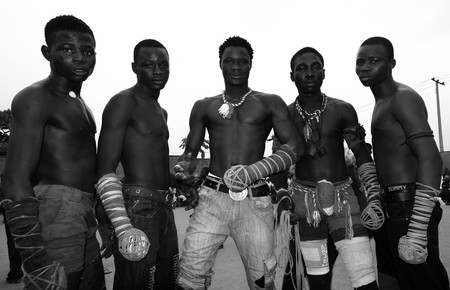 What happens during a match?

An attendant charges a fee at the gate of a large, open field, welcoming men, women and children. Wooden benches are placed on elevated platforms to give an illusion of an arena, while local musicians sing and drum away to war songs. The fighters bind their punching hand—referred to as ‘the spear’—with a rope called ‘kara,’ making it as strong as a stone, while the weaker hand is used as a shield for protection and must be held with the palm open facing towards the opponent.

The three-round game is not timed, instead an end is called when an opponent or official calls for a stop or the opponent is knocked to the ground. The game is essentially about punching and kicking as a tone down against the former approach, which was abolished because of its dangers—fighters had shards of glass sewn with the kara to inflict maximum body damage on their opponents, which sometimes resulted in death. Another typical normality with the Damba warriors is that their right forearm is usually completely covered in about one-centimeter of scars made from razor cuts laced with traditional herbs to give them strength and help them win—it is also not uncommon for fighters to wear charms on their bodies and smoke marijuana before the fight.

The life of a Dambe boxer

Just like other athletes, Dambe boxers engage in an intense training regime—workouts are conducted morning and evening, five times a week. While some exercises are exclusive to the Hausas, others aren’t, such as a drill, carried out to strengthen the head, neck, and trapezius muscles—the boxers do push ups with their heads, similar to the neck bridges practiced by wrestlers. The use of a single finger to support the weight of the body is also applied for strengthening the punching hand and arm.

Though fighters can be as young as 10 years old, the career span for the sport is short—boxers usually retire in their late 20s, retreating to coaching younger members or searching for other sources of income. Just like other contact sports, the long-term effect can lead to brain damage. One of Nigeria’s most famous Dambe boxers, Shagun Dan Tagayi, a champion in the Sokoto region, had his fighting career cut short due to damage to his brain sustained from the sport.

Is there hope for this sport to somehow make its way to the Olympics someday? Well, the possibilities are endless. The President of Nigeria Traditional Boxing Premier League (NITRABOL), Faruk Bello, is certain that the league body would raise the traditional boxing level to Olympic Games standard.

”Nigeria’s traditional boxing, which is also known as Dambe, will also be at this level if we apply the right approach to the game, with hard work and determination. This is the second season of the league with 10 clubs participating. We conducted the first season… with eight clubs. We started the first phase of the league… in Katsina, and we are working hard to modernize the game like modern boxing,” he said.