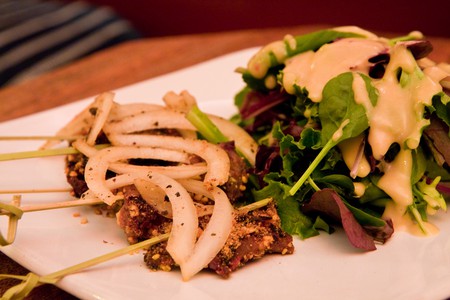 At first glance, shish kebabs and suya may seem the same or a variation of the same dish. However, they are in fact different meals entirely. The first, the shish kebab, is a Middle Eastern blend of skewered meats served up inside bread or with vegetables. The other, a West African response to the shish kebab is called “suya”. You would be hard-pressed to find an African who did not know about, or love, the ubiquitous suya.

Suya is the creation of northern Nigeria and is spread throughout the geographic region of West Africa. The Hausa, the Tuareg and the Berber tribes have a similar North African culinary culture, with meat featuring heavily in their cuisines. Here, meat is often marinated for several hours in a peanut paste or in groundnut oil-infused spice blends.

In Nigeria, suya has been a street food favorite for decades. Despite its popularity, it has yet to translate fully into the mainstream restaurant dining experience. Some places offer suya on the menu but nothing beats the taste of suya from a Mai Suya (a suya seller) on the street corner who slice and grill, expertly blinking away the smoke from their eyes.

Someone once declared that alongside the horses on the Nigerian coat of arms, a generator and suya ought to be placed. This thin-sliced delight marinated in an assortment of secret spices holds its place securely in the hearts of Nigerians at home and abroad. While no one really knows how the name suya came about or what it means, the street food is a staple across the entire country and is often sold from early evenings, mostly by northern men on roadside open grills. Depending on the location, you are often able to find at least one of these every few minutes. 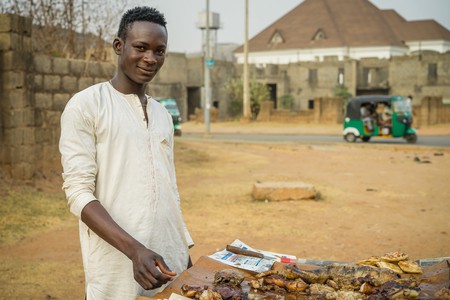 Suya on first look seems fairly standard fare. Skewered beef, ram, chicken or tripe marinated and grilled can’t be too hard. However, the recipe for the marinade, famously called “yaji”, seems to be one of the best-kept secrets of northern Nigeria. When ordering suya, those with a temperament for extra spice should ask for some yaji on the side. It is an excellent condiment and goes well with rice noodles and anything that needs a kick. Think of it as the African cousin to hot sauce.

Suya can be found across West Africa, along Nigeria, Cameroon and Niger Republic. On average, it takes a few hours to prepare marinade and grill, which makes it an evening/night delicacy and the perfect meal for the tired commuter or the hungry one.

If you want to try it, it’s easy to make if you can get your hands on some yaji pepper. Soak the grill sticks for a few hours to avoid burning. Get your meats thinly sliced and skewer on the beef. Marinate in a combination of spices (yaji included), roast over a grill and enjoy with onions and tomatoes.

Don’t give up if the first time doesn’t work out so well — persevere. If all fails, you can always book a direct flight to Lagos where delicious suya is waiting on the streets for you to taste.