Read an Excerpt from Namibian Novelist Giselher Hoffmann's 'The Firstborns' 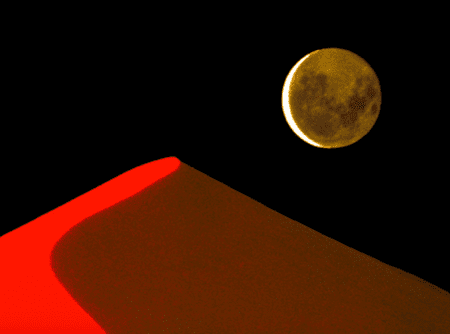 Cover of 'Die Erstgeborenen' ('The Firstborns') | Courtesy of Union Verlag

A young Khoi man begins his search for the Lost City of the Kalahari in the Namibian selection from our Global Anthology.

The last downpour fell over the Kalahari a year ago. The sun burned down upon the rust-brown dunes, sparsely vegetated with grasses and acacia trees, and the wind blew listlessly in the Auob’s dusty bed. Uprooted trees had fallen upon the dried-out bends of the river’s path; these witnesses of a flood, which had rolled them toward the southeast after a sudden torrential rain: it had been thunderous and far quicker than Benjamin, who painstakingly trudged through the washed up mud and struggled with a mule.

Benjamin was Khoikhoi¹ – more accurately he was a traveling merchant, who for weeks, oftentimes for months, disappeared into the Kalahari to allegedly do business with the San people who traded bows and arrows with visitors in exchange for glass beads, metal plates, tobacco and pocket knives. In reality, however, Benjamin was searching for the infamous Lost City of the Kalahari by order of a certain Hermanus Johannes Ecksteen. The ruins had been discovered in the desert in 1885 by an American named Guillermo Antonio Farini. Since then no one had been fortunate enough to see the ruins again, because Farini had left no map leading back to this civilization, only a sketch depicting rounded stone monuments half-covered by sand. And Benjamin’s client, who owned an assorted goods store in Gochas, wanted to be the first white person to see the Lost City again.

However, the San rarely trusted foreigners and, equally, would reveal nothing to this skinny Khoi man in beige overalls and a bright red cap, all because they blamed his never-ending smile for confusing the hearts of the tribe’s young women and accused his eyes of housing deceit. Only after Ecksteen had given him cheap liquor for the journey did Benjamin succeed in stealing one of the Kalahari’s secrets. Even if it were not the Lost City itself, it was still a secret that he believed could sell for a high price.

Despite his thirst and his feet aching in their kudu leather shoes, neither Benjamin nor his mule indulged in rest. Before nightfall, he wanted reach the Gochas station, which was founded by the missionary Friedrich Rust shortly before the turn of the century.

After a couple of hours he left the Auob and climbed up a steep mound to a limestone plateau. On the edges of the abyss lay Gochas, a tiny place in South West Africa. Here, in March of 1908, Captain Friedrich von Erckert initiated his devastating attack on Simon Kooper, the captain of a subtribe of the Nama known as the !Khara-Khoen². Benjamin hobbled over to the site where Erckert and the Schutztruppe launched their attack. From there he turned onto the wide and dusty dirt road which cut Gochas in two. On this particular late afternoon, the street appeared swept and empty. He paused, warding off the bleeding sun with one hand, and examined the patchy row of houses to his left. Benjamin’s gaze fixated on a yellow, flat elongated building at the edge of the settlement. He could not read, but everyone in Gochas knew that the words written on the sign hanging off the porch roof read “Ecksteen General Store” and Benjamin smiled when he saw that the shop was open. He tied the mule to the porch’s bannister, stepped onto the patio and after a few quick knocks, entered the store. In the faint light, it took a while before he recognized Ma Ecksteen³, who stood gauntly and erect at the cash register in a lace dress that reached up to her neck. Behind the counter, which Ma had buffed to a shiny white after years of scrubbing, leaned shelves touting every conceivable item a person needed to survive the barren Kalahari.

Benjamin grinned as he removed the cap from his head: “I have returned, missus.”

“I can smell that,” said Ma Ecksteen, on account of Benjamin not washing himself, not even once, on his month-long journey. To her dismay, Benjamin came closer in his filthy overalls until he was beside the counter.

“I must speak with the bossman⁴, missus.”

Disgusted, Ma Ecksteen backed away towards the shelves.

A red-headed boy stuck his head through a door that led to an adjacent storage room.

“Call your pa,” she commanded. “And you…” she turned to Benjamin, “you wait in the storage room. Your stench will scare away the customers.”

The storage room smelled like burlap, cornmeal, brown sugar, tobacco, coffee, and washing powder. From the back corner one could hear the jingle of the shop’s old cash register, especially on Saturday when the farmers came to Gochas to run errands. Even in the early morning, one could already see the farmers standing on the porch, puffing away at their pipes, while the women whispered slightly off to the side waiting for Ma to open the door. Then they would clamorously pour in the shop, anticipating Ma Ecksteen’s coffee and baked zwieback. Behind the counter Pa Ecksteen would listen to the complaints: one farmer faced a drought, another had lost his breeding bull, someone complained that their well had dried up; Oma Hester had a pain in her chest, Auntie Martha was expecting again. And if Pa opened a line credit for them, how they straightened up to once again face the Kalahari.

Benjamin was reflecting on whether he should take a packet of sugar and some tobacco as a precaution when Hermanus Johannes Ecksteen stepped into the storage room.

¹ In the original text Hoffmann refers to Benjamin as a “Hottentot.” This term, which references the click sound in the Khoikhoi tongue, and was applied to the tribe by white European colonizers, has fallen out of use and is largely considered derogatory. Similarly Hoffmann refers to another tribe, the San, simply as “bush men.” Though the term “San” has historically had pejorative connotations, it appears to be the preferable term to date. I have decided to restore the proper name of the Khoikhoi and San and footnote the outdated terms.

² The “!” in !Khara-Khoen is a character commonly used to denote a tongue click. Note that the original in the German is “Fransmannhottentotten.”

³ Honorifics such as “ma” “pa” and “missus” appear as such in Hoffman’s original text.

⁴ Hoffmann uses the word “baas,” which is Namibian slang for a white male boss. To emphasize the racial disparity in this word as it appears to be used here, I have gone with “bossman” rather than the more common and less charged “boss.”

Translated from the German by B.L. Hazelwood. Originally published in German as Die Erstegebornen by Unionsverlag. Giselher Hoffmann was one of Namibia’s most prolific German-diasporic writers. He passed away in Swakopmund in 2016 at the age of 58.