The ghost town of Kolmanskop | © Sonse/Flickr

The Skeleton Coast is a forlorn, sand-blasted stretch of wasteland where few bother to venture and only the toughest of animals can survive. It is known to the San Bushmen as ‘the land God made in anger’ and the blazing heat and lashing wind indeed remind one of purgatory. During the early 20th century, a mineral find made it one of the richest tracts of land on the planet, and diamonds became the mainstay of the Namibian economy. Then, in 1954, all this came to a halt, leaving the formerly profitable diamond mining town of Kolmanskop to be swallowed up by the merciless Namib desert. Today, it is a ghostly shadow, devoid of its life-giving precious stones.

Kolmanskop was once home to hundreds of German families who descended on the area in the early 1900s in the hopes of changing their fortunes and finding diamonds (that were literally lying in the sand). It all began in 1908 when Zacherias Lewala, a railway employee, was removing dirt from the train tracks and made an unusual find.

Perplexed, he took the glittering stone to his employer, who also happened to have formerly worked for De Beers, the world’s leading diamond mining company. The stone was identified as a diamond and soon the quiet Kolmanskop became a frenzy of fortune-grabbing hopefuls. 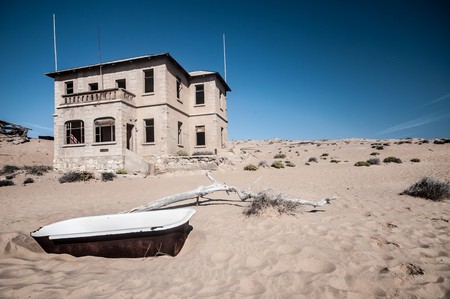 The birth of a town

Within the space of a few short years, Kolmanskop had become fully established and operational, looking much like any traditional, small German town. Despite the scorching desert conditions and lack of much other life around, by 1908 it was occupied by hundreds of German settlers. Hotels sprang up, as did a casino, theatre, town hall, and even a playground and swimming pool for the kids. 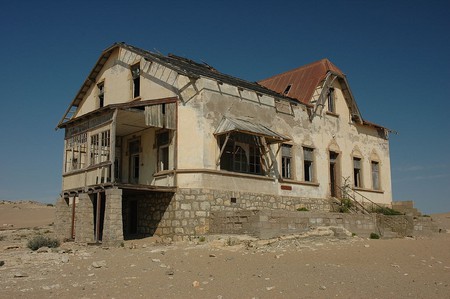 In 1912, Kolmanskop produced one million carats – or 11.7 percent of the world’s total diamond production. The wealth that these gems generated meant miners could afford every luxury. The town was in its heyday and an ice plant was established to help keep drinks cool. Residents dined on champagne and caviar while opera singers arrived from Europe to keep them entertained. Water was shipped in by rail, turning Kolmanskop into a lush and thriving oasis. 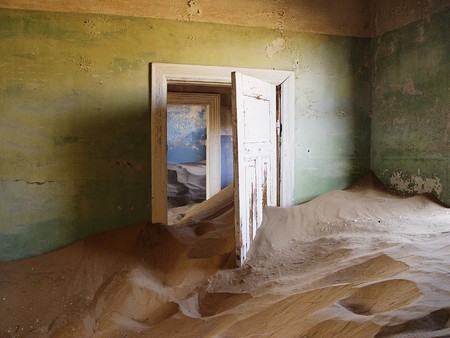 Inside a deserted house in Kolmanskop | Damien du Tiot/WikiCommons

A change of fortune

By the early 1930s, the diamonds that had once been so easy to find began to dry up, and Kolmanskop began to loose some of its lustre. Its shine faded even more when the richest diamond bearing deposits ever known were found on the beach over 200 kilometres (124 miles) away from the town. The fortune-seeking miners left as fast as they had arrived, with most heading south in search of further easy pickings. The seemingly never-ending supply of diamonds was now no more, and the town was abandoned as abruptly as it had sprang up. 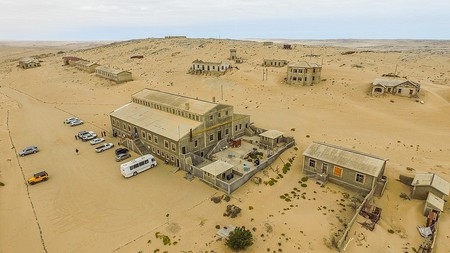 Ghosts of the past

Today, Kolmanskop is but a whisper of its former glory days. Over the years the desert has reclaimed ownership of the town and filled the once lively houses with sand and dust. Wind and sun have also taken their toll, although the distinct German architecture is still visible to the naked eye. 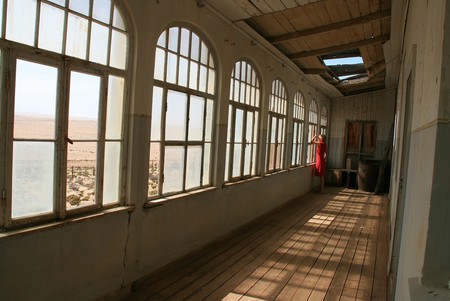 Other old fossils along the coast

Besides the ghost town of Kolmanskop, the Skeleton Coast is also awash with the hardships of ancient mariners and many a seafaring vessel has met its doom along this treacherous strip of coastline. Thick, cloying fog often blankets the area as a result of the icy cold sea meeting the scorching hot desert, resulting in zero visibility for naval navigators. 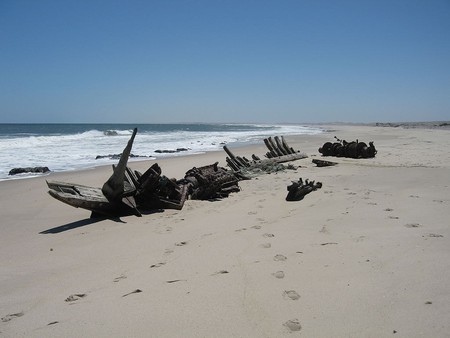 Shipwreck on the Skeleton Coast | © MarkDhawn/WikiCommons

Although many of the wrecks have been entirely destroyed by the sun and salty sea air, some are still intact and can be viewed up close. Among the more famous are the Dunedin Star that ran aground in 1942 and the Edouard Bohlen that today appears to be stranded in the middle of the desert.