Namibia | © wiggijo / Pixabay
There is no shortage of stunning natural scenery in Namibia, and the country presents quintessential African beauty around just about every turn. Its variety is astounding and its vistas quite breathtaking, while the quiet stillness slows down the pace and leaves time for reflection and inspiration. Here are some of Namibia’s natural highlights that contribute to its eternal appeal.

Park
A lone oryx in a desert sea | © Bjørn Christian Tørrissen / WikiCommons
It has been said that when it comes to this spectacular area of Namibia, the slower the journey, the better, as there are so many natural features to observe and absorb. The roads of this national park are excellent, making self-drive explorations easy, while the space and silence of the vast wilderness lend themselves to solitary adventures. Enormous sand dunes, towering mountain ranges, awesome canyons and fascinating wildlife can all be enjoyed in an area that also protects one of the oldest deserts on earth.
More Info
Open In Google Maps
Namibia
View menu
Visit website
Visit Facebook page
Send an Email
Give us feedback

One of the highlights of the western Caprivi is the Popo Falls, a series of beautiful white-water rapids that cascade gently and melodically down quartzite ledges. The falls form part of the Okavango River and cover a breadth of over one kilometre (0.6 miles) before descending down rocky outcrops into the Okavango riverbed. They are located at the entrance of the Bwabwata National Park, with many campsites gracing their shores, and splendid scenic beauty all around. Popo Falls can be accessed by foot and offer an incredible opportunity to observe the flora and fauna that thrive in and around the water. 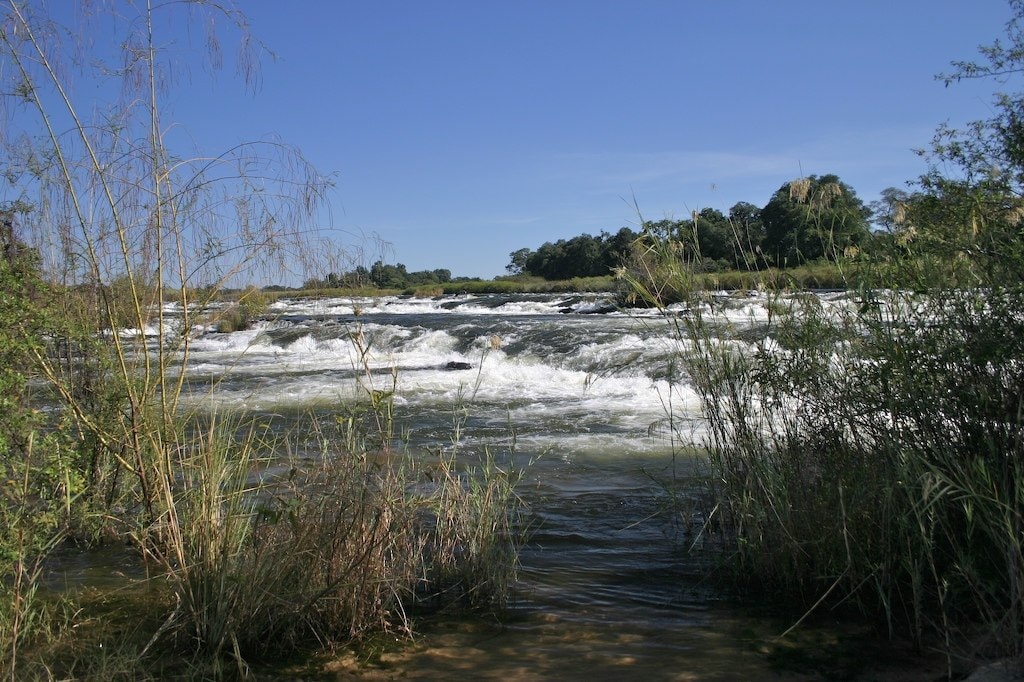 Natural Feature
Sossusvlei, Namibia | © John Dambik / Alamy Stock Photo
Here, mighty sand dunes dominate the terrain, dotted occasionally by unusual plants that survive despite the harsh and unyielding desert-like conditions. Tree skeletons stand out starkly against the red-hued landscape, renowned for some of the tallest and most beautiful sand dunes in the world, while the variation of the desert ecosystem continually amazes visitors with its unexpected sights. Soak up the picturesque dunes and the basalt mountains against the desert sunset, an astoundingly dramatically and glorious panorama.
More Info
Open In Google Maps
Hardap Region, Namibia
View menu
Visit website
Visit Facebook page
Send an Email
Give us feedback

This gravel road lies between the Khomas Highland and the Namib Desert and is the highest pass in Namibia. It was built almost entirely by hand and forms part of the district road D1275 between Rehoboth and Solitaire. Its sharp bends and steep gradients make it tricky to drive along, but those intrepid explorers who take up the challenge are rewarded with spectacular and unsurpassed aerial views of the dramatic landscape below. There is a viewpoint at the peak of the pass offering panoramic vistas of the Namib Desert, best enjoyed in the late afternoon, as the sinking sun casts a shimmering glow over the desert. 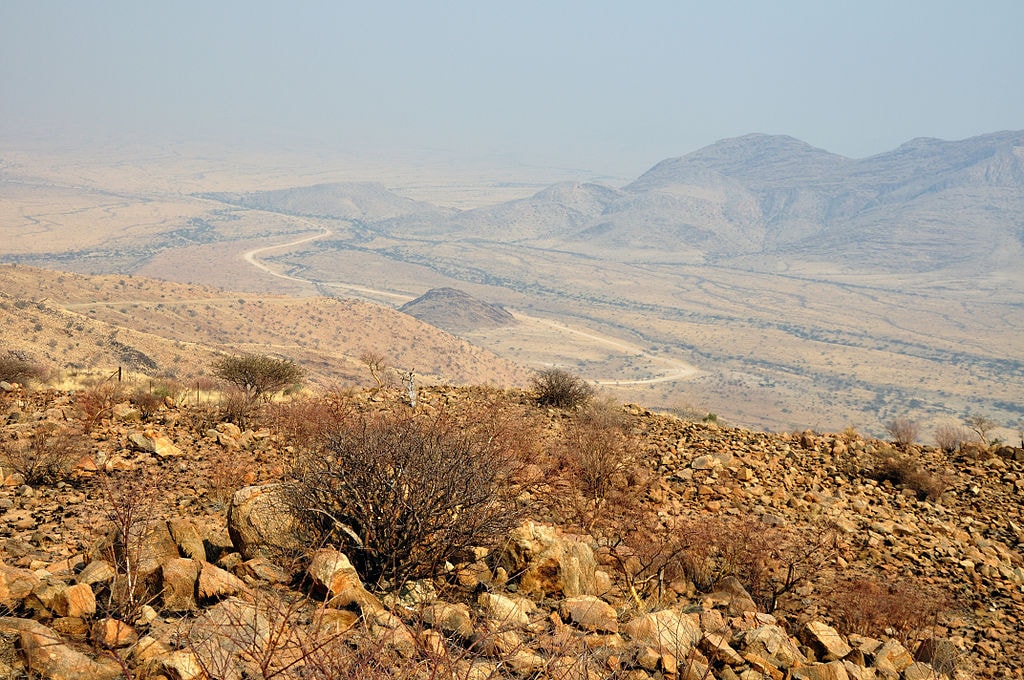 This amazing natural rock formation stands out tall against an arid landscape, and somewhat resembles a huge rock finger pointing up to the sky. It is located on the road between Khorixas and Outjo in the Ugab Valley, which is filled with table mountains and plateaus, formed as the Ugab River cut its way through the landscape. Vingerklip stand on a hill 929 metres (3,047 feet) above sea level and is 35 metres (114 feet) high. It is the only existing rock monument in Namibia and a very popular tourist attraction. 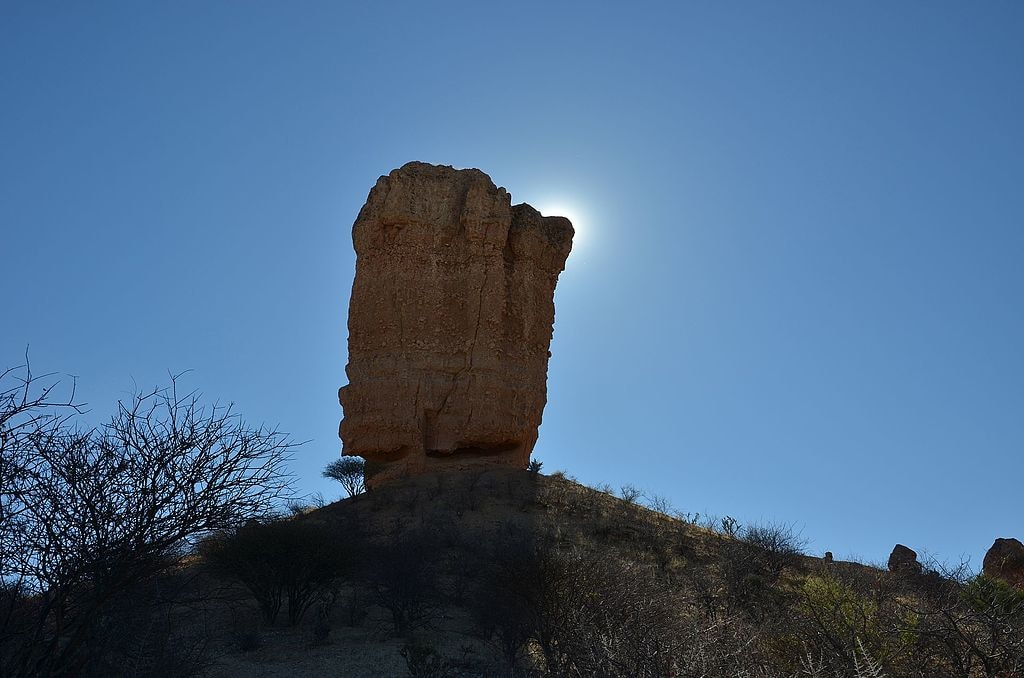 Park
African elephants in Etosha National Park, Namibia | © NSP-RF / Alamy Stock Photo
This spectacular wildlife park is dominated by a massive mineral pan, part of the Kalahari Basin, the floor of which was formed over 1,000 million years ago and fills up only for a short period of time, when rains are heavy. For most of the year it is a shimmering mirage against which the long shadows of passing herds of game can be seen, providing a unique and stunningly stark landscape. Despite its aridness, the park is rich in wildlife and boasts the ‘big five’ and over 100 other mammal species, as well as thousands of birds that flock to the pan.
More Info
Open In Google Maps
Namibia
+264811800016
View menu
Visit website
Visit Facebook page
Send an Email
Give us feedback

The vast stretches of Damaraland’s semi-desert landscape are a spectacular sight and are home to some rare and unusual sights, such as desert-adapted elephants striding along the dusty earth, and forests of petrified trees planted in beds of sandstone. The Damara tribe are thought to be the first people to have arrived in Namibia and have mystified anthropologists for years, as they are a group of Bantu origin who speak a Khoisan dialect and have no cultural relationship with any of the other tribes found in Africa. Black rhino are present throughout the regions, as well as many other animals, although these are more readily found in the east of Damaraland, where the vegetation is more lush. 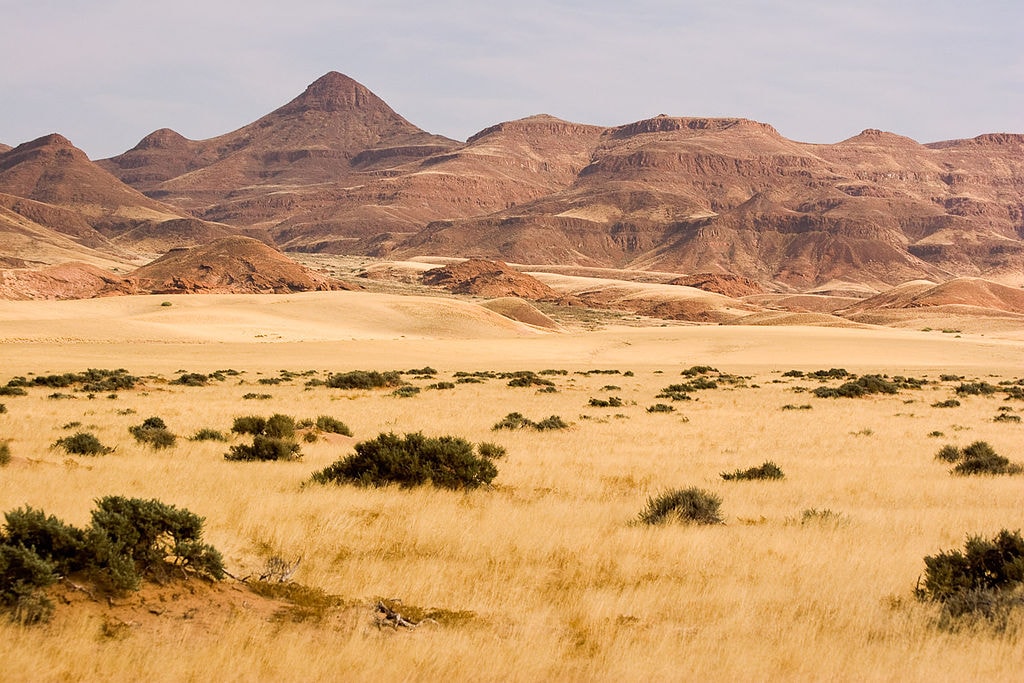 Natural Feature
Kaokoland, Namibia | © Thorsten Milse / robertharding/Getty
This remote region in northern Namibia is often considered one of the last true wilderness areas in Africa, where desert-adapted elephants roam the dry riverbeds in search of spring-fed waterholes, and the proud Himba people remain unaffected by changes to the modern world. Outside the capital of Opuwo there are no amenities, only a network of dirt roads that lead into a vast and isolated wilderness. The attraction of the area lies in its solitary beauty; it’s a rugged mountainous landscape that is sparsely populated and looks very similar to the way it would have appeared over 100 years ago.
More Info
Open In Google Maps
Kunene Region, Namibia
View menu
Visit website
Visit Facebook page
Send an Email
Give us feedback

Twyfelfontein is a UNESCO World Heritage Site that conceals one of the continent’s largest collections of African rock art and engravings, and there are various craters and mountains in the area to explore. The massive Brandberg massif is Namibia’s highest mountain, dominating the surrounding plains, and is home to an immense collection of early rock paintings, including the famous White Lady. 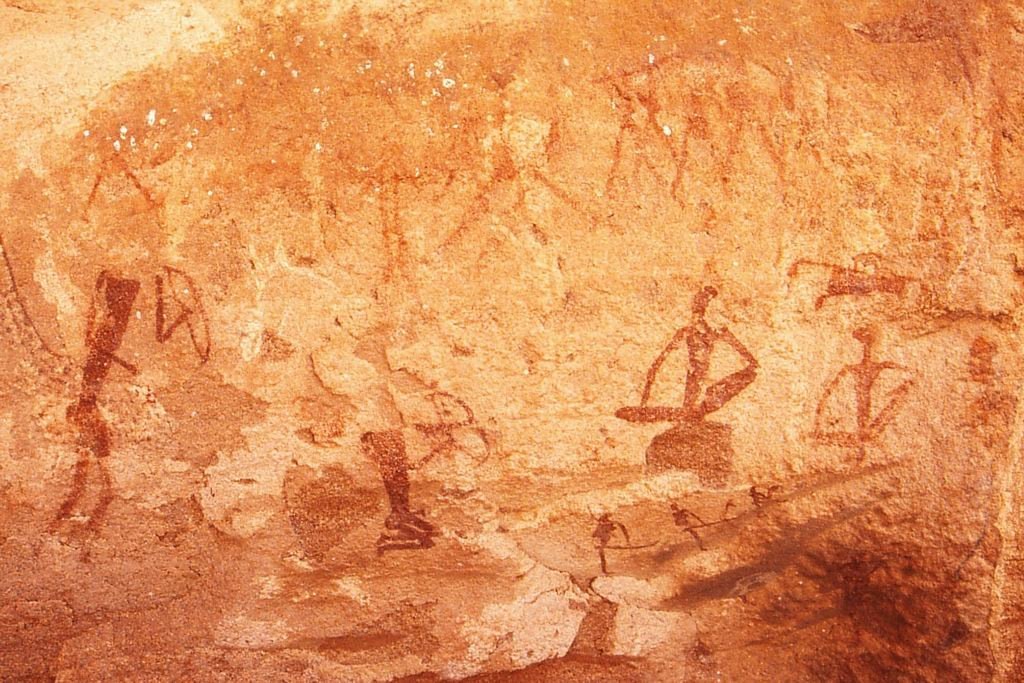 This emerald-green subterranean lake lies on a thick succession of well-stratified dolomite and limestone thought to be about 700 million years old. As the rock mass eroded, roofless cavities were formed, creating an upside-down mushroom-shaped lake, noted for its scenic setting and startling water colour. Ancient tribes believed that no living creature that entered the water ever came out alive again. Its reputation for being bottomless may have led to the dumping of a considerable supply of artillery and ammunition into its murky depths by retreating Schutztruppe (colonial troops), rather than letting the armaments fall into the hands of the South African troops.

Natural Feature
Flamingos, Sandwich Harbour, Namibia | © ams images / Alamy Stock Photo
Lying south of Walvis Bay, this amazing protected natural site was once used as a port by whalers. It consists of a freshwater lagoon that laps the huge dunes of the Namib Desert and is home to a massive variety of marine birds and unique archaeological sites showcasing ancient animal tracks and old graves. It forms part of the Namib Sea Sand, a UNESCO World Heritage Site and one of the biggest sand fields in the world. Entry to this area is only possible with a 4×4 vehicle, and visitors should be accompanied by a guide.
More Info
Open In Google Maps
Atlantic Street, Walvis Bay, Namibia
+264811473933
View menu
Visit website
Visit Facebook page
Send an Email
Give us feedback
Give us feedback