Why Visiting Marrakech Should Be Added to Your Bucket List 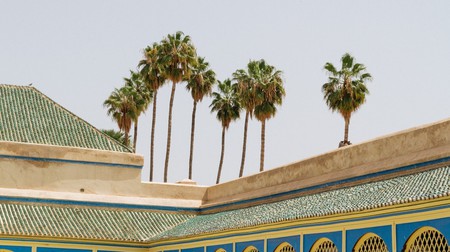 Nicknamed the Red City because of the high, reddish-brown walls that enclose the old medina, Marrakech is one of Morrocco’s most captivating destinations. Read on to be enchanted by this historic imperial city.

Want a more exclusive experience? Book Culture Trip’s six-day group adventure where you’ll visit a rooftop restaurant high above the city’s ancient medina before being led through its streets by our Local Insider.

In addition to luxurious hotels and resorts, Marrakech has a wealth of traditional riads and dars for guests to stay in. Found in the historic medina, visitors can sleep in the same buildings that were home to many generations of Moroccans; most traditional accommodations have been converted from private homes. 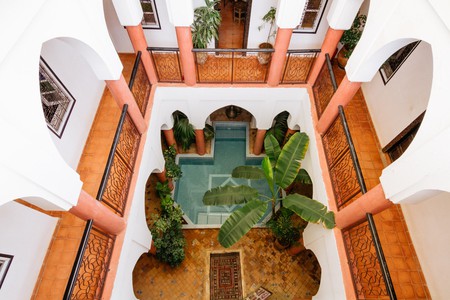 With a name that comes from the Arabic word for garden, the defining feature of a riad is an inner courtyard or garden. A fountain traditionally takes pride of place here, with rooms opening up to this inner area. Traditionally, riads had just one level, although now more properties have multiple, with upper rooms accessing terraces that look down over the communal area. Riads typically have few windows on the outer walls.

A traditional Moroccan home without the inner courtyard is called a dar. Dars can be as charming as riads, with bright light flooding in from above, offering a real sense of how Moroccan families traditionally live.

A hammam is a traditional Moroccan steam bath. It’s a place where locals go to bathe, socialise and cleanse. While there are many luxury hammams now open to the public, largely catering to tourists, it is still possible for visitors to experience an authentic public hammam in Marrakech. Do note that there are either separate areas or different opening hours for men and women. 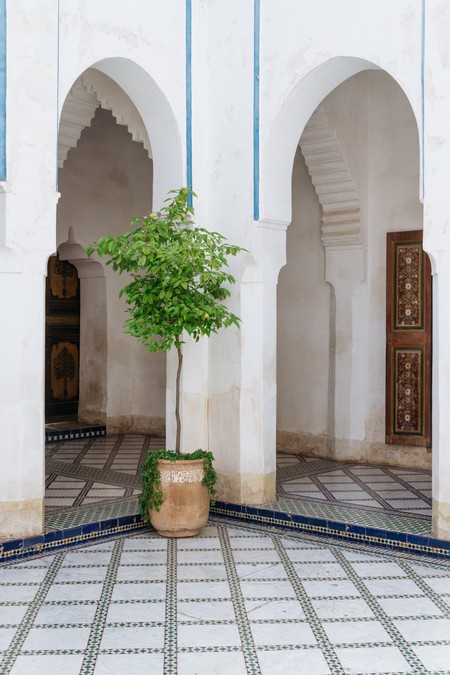 Visit Hammam Dar El Bacha, Kennaria Hammam, Hammam Essalama, Hammam Germai, or any of the neighbourhood hammams, to bathe as the locals do.

Marrakech has numerous restaurants and cafes where you can sit and enjoy a delicious taste of Morocco. In addition to well-known Moroccan dishes, such as tajine and couscous, look out for places that serve tanjia: a Marrakshi specialty that takes its name from the earthen pot it is cooked in. 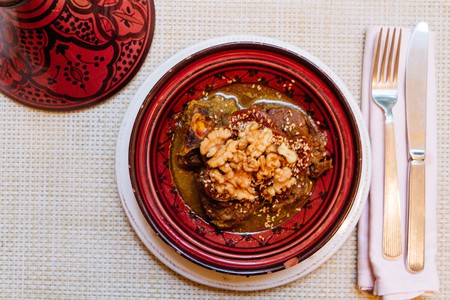 Wander through the medina and you’ll come across an array of street food. The French influence is easy to see in the abundant bakeries and, if you want something a little more familiar, filled baguettes and pizzas are widely available, as are cheap and cheerful eating options.

The medina is at the heart of old Marrakech. The high, sandy-coloured walls protected inhabitants from invasions in times gone by. Pass through one of the towering gates and you’ll find yourself in mayhem – people, bicycles, scooters, cars, donkeys, carts, and street stalls all compete for space. Narrow alleyways lead to even smaller ones, with ornate doors and interesting knockers, tradesmen get on with their daily tasks in open-fronted workshops, and children play in the streets. The medina is the place to go if you want to fully immerse yourself in local Marrakech life. 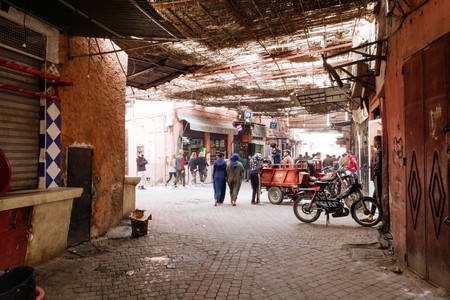 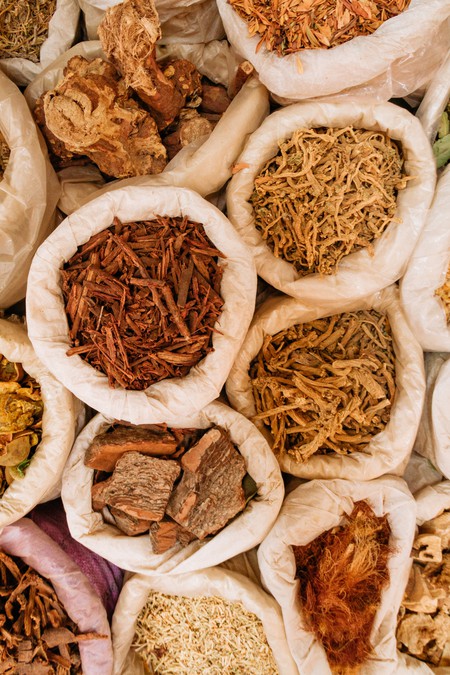 Djemaa el-Fna is a major highlight for those seeking entertainment. During the daytime, women offer henna tattoos, men demonstrate snake charming and an array of stalls sell an even larger assortment of goods. In need of some refreshment? Try the freshly squeezed orange juice. As night falls, the square becomes even livelier, with musicians, magicians, traditional-outfit wearers, dancers and storytellers adding to the carnival-like ambience. 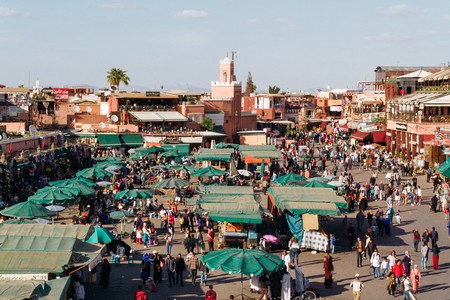 As a former capital city, Marrakech isn’t short of impressive historic sites. The magnificent Saadian Tombs showcase artistic and architectural details from times gone by, while the El Badi Palace stands in a forlorn yet evocative state of ruin. Peek inside the Ben Youssef Madrassa for some religious history, admire the soaring minaret of Koutoubia Mosque and be dazzled by the details inside Bahia Palace. 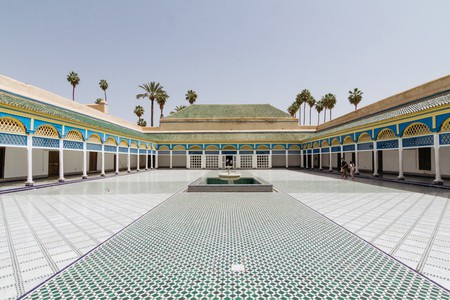 Marrakech has plenty of street art to stumble upon, with detailed graffiti contrasting the sleekness of commissioned pieces. A large painting of a Berber man on a wall opposite the train station is well worth a visit. 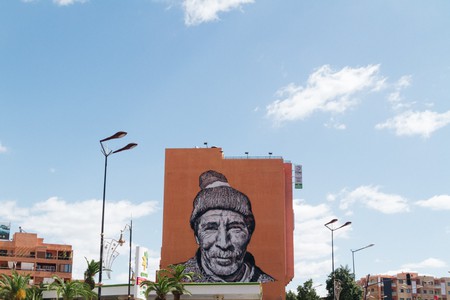 The city is also home to several great art museums and galleries, such as the Museum of Moroccan Arts in Dar Si Said, Maison de la Photographie, Dar Bellarj, and Voice Gallery.

Artistic details can be found almost everywhere in Marrakech, from the colourful tiling on the riad walls, to the artful presentation of food and attractive Islamic-calligraphy pendants that hang from the rear-view mirrors in most vehicles.

If the hustle and bustle of Marrakech becomes too much, several peaceful parks and gardens offer the perfect respite. Stroll through the olive trees in the Menara Gardens and peer into the waters of the large reflecting pool, see a lush assortment of plants and flowers from around the world at the acclaimed Jardin Majorelle, and watch the fountains as you connect to the free wifi in Cyber Park. The Unesco-listed Agdal Gardens have a royal heritage and make up one of the oldest parks in Marrakech. The gardens are, however, only open to the public on Fridays and Saturdays. 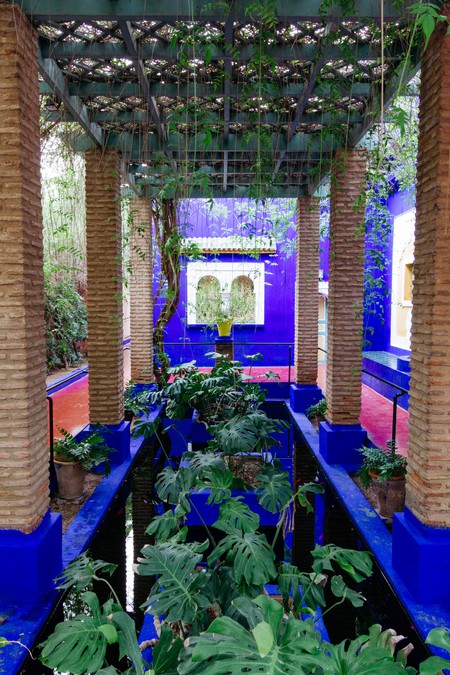 Marrakech has seven shrines in honour of prominent religious men from the Sufi branch of Islam. Followers of Sufism from around the world visit these large shrines to pray and seek blessings. Scattered around the city, the shrines are not accessible to non-Muslim visitors. There are seven large stone towers just outside the medina walls, close to the Bab Doukkala Gate and central bus station, which represent the seven Sufi tombs. 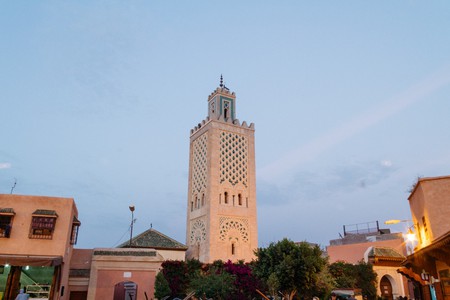