Why Marrakech is Also Known as the City of 'Seven Saints' 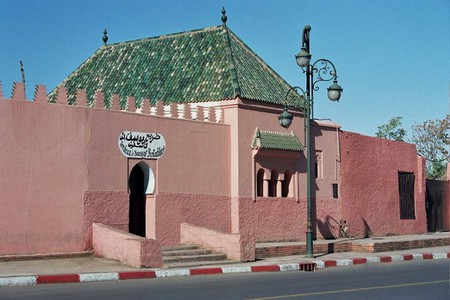 Outside of a tomb in Marrakech | © Wikimedia Commons

Morocco’s Marrakech is a former imperial capital city with a long and interesting history. A hotbed of culture and heritage too, Marrakech is one of the most popular tourist destinations in Morocco. Famously referred to as the Red City or the Rose City, due to the colour of the high walls that surround the ancient medina, it is sometimes also known as the City of Seven Saints. Read on to find out why.

Background behind the Seven Saints

Marrakech is often called the City of Seven Saints by people who know the details of the city’s varied history. In the local language, the city is referred to as Sabatou Rijal. Although this literally translates as seven men, it is commonly said to mean seven saints.

Marrakech is the final resting place of more than 200 men of religious and spiritual significance. Seven in particular, though, were especially revered during their lifetimes. They were believed to have been blessed by Allah with incredible wisdom and religious strengths. Moulay Ismail, a former Moroccan ruler, encouraged Moroccans to perform pilgrimage to the shrines in Marrakech. The sacred shrines are known locally as zaouias. 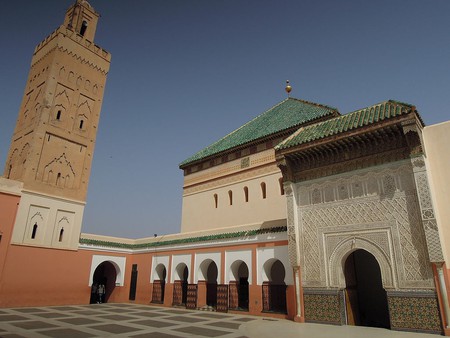 Outside the Shrine of Sidi Bel Abbas in Marrakech | © Wikimedia Commons

It is believed that one of Moulay Ismail’s main motivations for promoting the shrines in Marrakech was to compete with the then-popular shrines of the Seven Saints of Regraga. These shrines are located close to Essaouira. The tombs contain the remains of seven Christians who converted to Islam after visiting Mecca and meeting the Prophet Muhammad. Upon returning to Morocco, the men worked hard to spread the word of Islam. By promoting the Marrakshi shrines, Moulay Ismail secured Marrakech’s spot as one of the main religious centres in the area.

Overview of the Seven Saints

Abou Yaacoub Ben Ali Assenhaji was born in Marrakech, and spent his entire life in the city. Also known as Sidi Youssef Ben Ali, he retired to live in a cave. Suffering from leprosy, locals did not expect him to live for long. He lived for longer than expected, though, and aroused curiosity, with people eventually starting to visit the cave to seek advice on diverse matters. He finally passed away in 1196.

Born in the northern area of Ceuta, which is now a Spanish enclave, Qadi Iyad ibn Musa was a respected religious leader. Also known as Qadi Ayyad, one of Marrakech’s universities was named in honour of the scholar. He died in 1149.

Born in Malaga, Spain, Imam Abderahim Souhaili was a blind man from a poor family. He learnt the Quran off by heart and lapped up knowledge. He left Andalusia and died in 1185 in Marrakech. 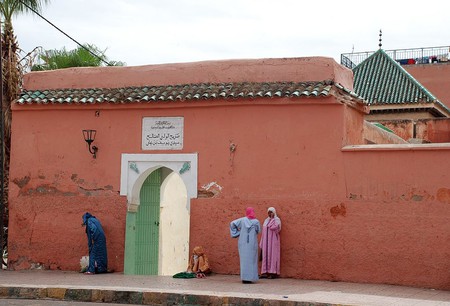 Belabbas Ahmed Sebti was born in Ceuta. Known also as Sidi Bel Abbas, he is often said to be the Patron Saint of Marrakech. He studied hard, often against the wishes of his mother who wanted him to work. He attracted the attention of the local Sheikh, who paid his mother a monthly allowance so that he could further his learning. He became a champion of the poor and died in 1204.

Born in a small village close to Essaouria, Abu Abdullah Muhammad al Jazuli was a Sufi leader of a Berber tribe. Also known as Sidi Suleiman Al Jazul, one of his greatest achievements was putting together a popular prayer book: the Dala’il al-Khayrat. He died in 1465. Originally buried near to his village, his body was later moved to Marrakech.

Sidi Abd El Aziz was a devout man of religion. He became famous while living in Fes. He passed away in 1508. He is known also as Sidi Abdel Aziz.

Sidi Abdullah Ghazouani was one of Sidi Abdel Aziz’s followers, becoming a respected figure in his own right. He led the resistance movement against the Portuguese when they tried to invade Marrakech in the early 1500s. He died in 1528, and his tomb became one of the seven venerated sites in Marrakech. 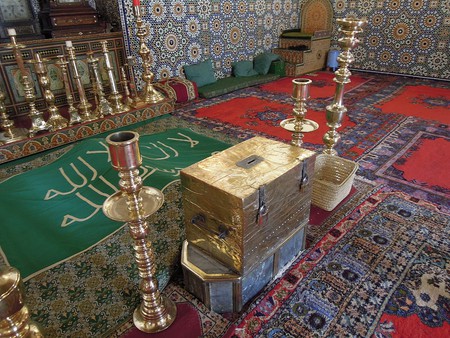 Inside the shrine of Sidi Bel Abbas | © Wikimedia Commons

Locations of the Shrines

The sacred shrines of the Seven Saints are scattered around Marrakech. There is a monument to the saints, however, close to the main bus station. Lying just outside of the Medina’s walls, near Bab Doukalla, there are seven towers standing in a row. With no signs to indicate their significance, and with rather a plain appearance when compared with the rest of the city’s fine architecture, the towers are often overlooked by visitors. 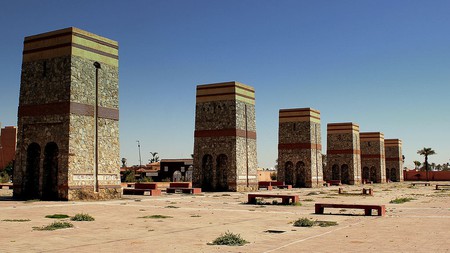 Monument to the Seven Saints of Marrakech | © Wikimedia Commons

Visiting the Shrines of the Seven Saints

Although visiting the tombs and memorials isn’t as common as it was in the past, the shrines do still receive a large number of people who want to pay their respects and seek good fortunes. As holy sites, the ornate shrines are, unfortunately, closed to non-Muslim visitors. Muslims pray at the shrines and seek assistance with a variety of matters, from attaining inner peace and strengthening their devotion, to healing ailments and diseases and reaching their life goals.

Traditionally, devotees should visit the shrines in a particular order and each on a certain day. The pilgrimage should begin on a Tuesday, with a visit to Sidi Youssef Ben Ali’s shrine. Qadi Ayyad’s tomb should be visited on Wednesday, with that of Sidi Bel Abbas on Thursday. On Friday, visitors should pay their respects to Sidi Suleiman Al Jazul, while Saturday is the appropriate day to worship at the zaouira of Sidi Abdel Aziz. Pilgrims visit Sidi Abdullah Ghazouani’s tomb on Sundays and conclude their trip on Monday at the tomb of Imam Abderahim Souhaili. 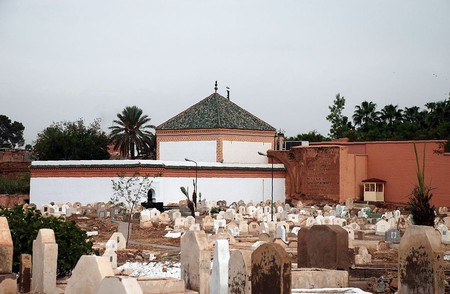