Why Do Moroccans Eat Couscous On Fridays? 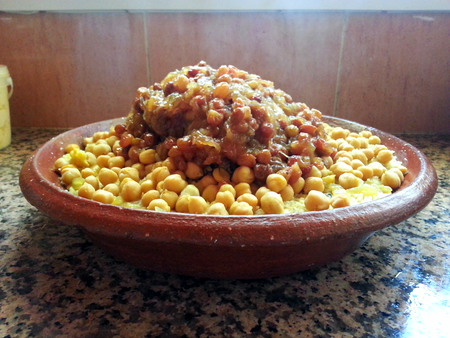 Fridays: they take on a whole new meaning in Morocco. While most of the rest of the world is out partying, it’s typically a quieter day throughout the souks across Morocco. Men traditionally head to the hammam in advance of Friday’s midday prayers, while women are at home preparing couscous. After all, preparing the couscous in true Moroccan style takes many hours – there is no instant couscous here. It’s a day when families gather, children have the afternoon off school and businesses may not open until late afternoon.

Similar to the western ritual of gathering for a Sunday dinner with family following the morning church service, Moroccans traditionally gather around the table to share a massive platter of couscous following Friday prayers. From the smallest villages to the larger cities, you’ll find Moroccans gathering for a bowl of couscous. Or in the more industrial and economic areas, ordering their bowl of couscous from the local café. In fact, it’s so popular, a tradition so strong, that some restaurants don’t serve anything but couscous on Fridays. 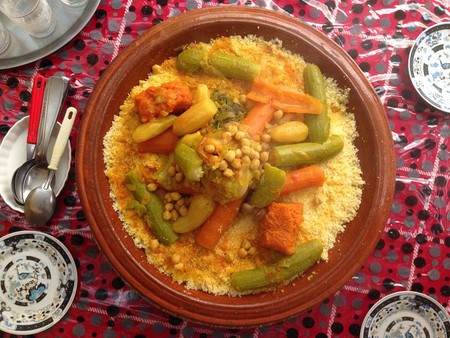 But unlike in the West where couscous is instant, here in Morocco it’s an hours-long, labor-intensive process.

It all starts by heading to the souks to pick up the seven vegetables required – eggplant, zucchini, carrots, parsnips, pumpkin, tomato and a bit of cabbage. Then a stop at the local shop to pick up a package of prepared couscous. Of course, not forgetting the fresh parsley and the raisins to make into tfaya.

Then it’s time to return home to prepare the vegetables, which are placed into a large pot – more specifically a couscousiere – with a blend of spices and a bit of water. They are then brought to a boil with the second pot filled with couscous, steamed by the boiling vegetables below. Preparing the couscous is a process in itself that requires sprinkling the couscous with table oil before placing the semolina in a couscousiere.

After about two hours, and removing the couscous on a few occasions to fluff it and roll it with olive oil, add more water and salt, the vegetables should be tender and the couscous cooked to perfection.

It’s then, following Friday midday prayers at the mosque, that families traditionally gather around to indulge in this special dish. Typically eaten with the hands and tossed into little balls, it may be consumed with a bit of beef or chicken served on top of the vegetables.

For added sweetness – after all, if you’ve ever had a cup of mint tea you’ll understand Moroccans love a touch of sweet – a blend of raisins and caramelized onions, known as tfaya tops the dish. The sugary blend complete with cinnamon pairs perfectly with the cut of beef below.

While it is the traditional Friday dish, couscous is also served during baptisms and wedding celebrations. Travelers in Morocco, though, may wish to avoid ordering couscous any other day, as truly local restaurants tend to serve the dish only on Fridays when the finest couscous is prepared in steaming pots. 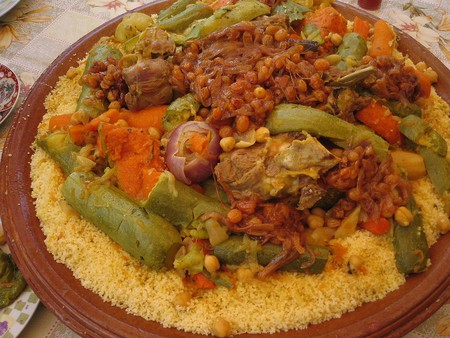