What Locals Love About Marrakech 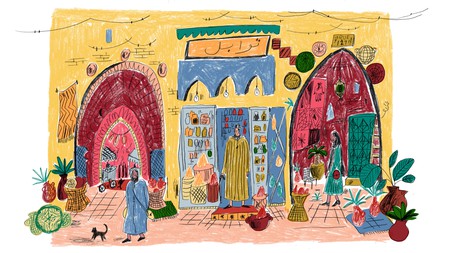 Urban legends have been made in Marrakech for a millennium, spun by Berber warlords, sugar-baron Sultans, Sufi saints and Rolling-Stones reprobates. As a result, the city has attracted more than its fair share of conquerors, travellers, entrepreneurs and creatives, but what do the locals make of their much-loved city?

There is an irrepressible energy in Marrakech: in the chaotic, honking traffic; the throng of people in the souks petitioning for attention; and, in the daily halqa (street theatre) of the Djemaa el-Fna. Known locally as bahja (joyous ones), Marrakshis have a reputation for their infectious smiles and generous personalities.

Many locals believe this effervescent vibe is inevitable. Marrakech is, after all, an oasis on the edge of the desert, and like the water that bubbles up from underground aquifers to feed the city’s fountains, so life thrives. The city’s raw potential and strategic position between desert, mountains and sea captured the imagination of Berber founder Youssef ben Tachfine, so he raised the first ramparts around his camp in 1062.

Ever since then Marrakech has been a commercial crossroads where the Berber population eventually mingled with Arab colonisers and Gnaoua (freed slaves from sub-Saharan Africa). Jews and Christians also have a long history in this tolerant Muslim community, and faith permeates everyday life, providing a foundation for the city’s cultured outlook. Added to this, for more than a century, European Bohemians have been drawn to the fervent creativity that permeates every aspect of life here.

Merging ancient traditions and natural entrepreneurialism, this modern-Medieval city now effortlessly blends bazaars and boutiques, clubs and cultural centres, faith and multiculturalism. To make sense of it all, we asked seven locals what they love about their city. 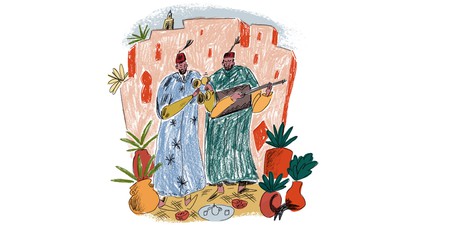 “I meet other people from around the world who also appreciate beauty,” says Mostapha Latrach, a silver trader who works in the medina

Mostapha Latrach, a Marrakech-born artisan, owns a twinkling silver shop in Souk Labbadine (Dyers Souk). “I opened this shop in 1988, because I love beautiful things,” he says, polishing a silver teapot that once graced the tables of the legendary Mamounia hotel. “I enjoy working here because I meet other people from around the world who also appreciate beauty.”

Over the years, Mostapha has seen the evolution of the Medina from a neglected neighbourhood pre-1980 to the thriving entrepôt it is today. “The Medina used to be very poor, but there was solidarity among the shopkeepers and everyone had a strong vocation.” Nowadays, there’s a lot more competition and some shops sell mass produced goods. “Change is the only sure thing,” he reflects. “But we must preserve our traditions.”

Oussama Laftimi, restaurant entrepreneur, notes that “Marrakech has always been a dynamic place”

Oussama and Kamal Laftimi are pioneers, opening the Medina’s first fusion restaurant, Café des Épices, in 2004. “My brother has always been a visionary,” says Oussama, who runs the business side of things. “When we started, we didn’t know how things would turn out. But we just believed in the idea and did our best to make it happen.” And make it happen they did, with the addition of Le Jardin in 2012 and Nomad in 2014. The latter is now the Medina’s most popular restaurant.

Recently they launched Le Kilim, in Gueliz, the New Town. “We want travellers to venture out of the Medina and see the modern side of the city. Gueliz has its own history and stories and we want to share that, too.” It’s another far-sighted move in this evolving city. “Marrakech has always been a dynamic place, even for Moroccans. The biggest change now is that the world knows about Marrakech.”

“I’m Algerian, but I came to Marrakech from Paris where my parents emigrated during the revolution,” Norya confides. “I wanted to explore my roots, but then I arrived I fell in love with Marrakech, the people, the light.” Initially, Norya worked in event management, but then wanted to strike out on her own. “I tried various ventures which didn’t work out. Then the owner of Le Jardin gave me a space in his restaurant. It was a real Marrakshi gift.”

Although she’s made clothes since she was 15, Norya isn’t formally trained. “I wasn’t confident I could do this, but here in Marrakech dreams can come true.” Not long after she started creating her modern takes on traditional garments like the abbaya and foukia, she met Mos Def at a party. “He loved the abbaya I was wearing so I made one for him. After that the business took off.” Norya has now sold kaftans to the likes of Sharon Stone, Maggie Gyllenhaal and Eryka Badu, and has just opened a new showroom in Gueliz on Rue de la Liberté.

“Here in Morocco many people have nothing, but they laugh easily,” says Rabat-born Souhail Tazi, a farmer and founder of an organic food market hosted in the patio of La Trattoria restaurant. After decades spent living in Paris and working in advertising, Souhail grew tired of the rat race, so he returned to Marrakech and bought a 12-hectare (30-acre) farm, which he called Domaine Sauvage. “There was only one palm tree there, but a local water diviner told us there was water,” says Souhail. “It only took us five years to find it!”

After that the farm flourished and friends soon started asking for fruit and veg boxes. “Then, three years ago, my friend Aziz (from Sanctuary Slimane) and I started the market.” Now they supply produce for boutique hotels like Riad Jardin Secret. For Souhail, farming is more than just a means to an end – it’s a philosophy. “We want everyone to think about how they live, every day. Because everything we do matters.” 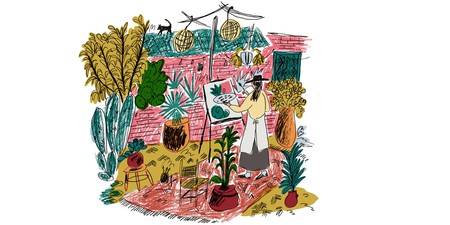 “There’s just something magical about the light and the colours here,” says riad-owner Cyrielle Astaing

Parisian transplants, Cyrielle and Julien settled in Marrakech in 2010 in search of a more creative life. “Before we moved we were working in fashion in Paris. We loved our work, but we wanted a slower pace of life,” says Julien. “We travelled all around Morocco on Julien’s motorbike,” adds Cyrielle, “but we kept coming back to Marrakech. There is just something magical about the light and colours here.”

The first riad they saw was Jardin Secret. “At first, we were afraid of the renovation work as we have no architectural training,” Julien explains, “but once we started we found we loved the collaboration with the craftsmen. We made mistakes and learned from each other.” From this humble beginning, they launched an artist’s residency in 2018. “The residency was always in our vision,” Cyrielle says, “the riad allowed us to meet the most amazing artists from around the world. Now it is a privilege to show them Marrakech and see the impact of the city on their work.”

“Marrakech is a city where the old and new worlds meet,” says Janine Gaëlle Dieudji, exhibitions director at MACAAL.

“I was excited by the city and the challenge of growing the project and myself along with it,” says Janine Gaëlle Dieudji, who works at the Museum of African Contemporary Art (MACAAL). The exhibitions director moved from Florence in 2017 to oversee the exhibition programme and artist residency, which supports both experienced and emerging talent, including photographer M’hammed Kilito and illustrator Mohammed Haïti.

“Like Florence, Marrakech is a city where the old and new worlds meet. It is intimate, but also international. That aspect of the city’s character attracted me,” reflects Janine who embraces that local-global outlook at MACAAL by partnering with international fairs, such as 1-54, and inviting curators to explore their pan-African collection in themed exhibits. “Having that dialogue is essential to shedding light on contemporary creativity on the continent,” she says.