AFRICA
/
MOROCCO
/
CASABLANCA
/
Things to Do

Things to See and Do in Derb Ghallef, Casablanca 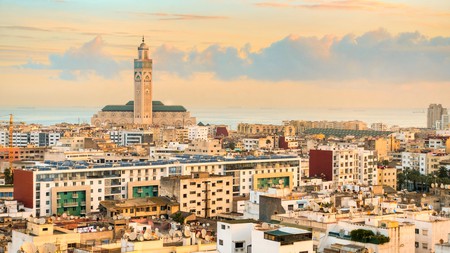 Derb Ghallef is a vibrant, bustling district that offers visitors an insight into the real Casablanca | © TinasDreamworld / Alamy Stock Photo

Absorb the sights, smells and tastes of Casablanca by visiting the lively souk of Derb Ghallef, sampling the delicious local tagine and wandering among the people who bring this beautiful Moroccan city to life.

Derb Ghallef is a vibrant, bustling district in Morocco’s largest city, Casablanca. Located in the Maârif neighbourhood, this busy, commercial area offers visitors an insight into the real Casablanca, away from touristy hotspots and landmarks, but still offering plenty to explore and experience.

Putting this neighbourhood on the map is the vast flea market – one of the biggest permanent second-hand markets in Morocco. If you enjoy rummaging through cluttered stalls packed full of antiques, books, garments and furniture, then you could spend days at Derb Ghallef Flea Market. However, it’s most famous for its electrical items, with many stalls selling phones, laptops and gadgets. The unpaved passageways can become sweltering in the hot summer months, while during rainy season water can cascade down the narrow walkways. The souk is also one of the best spots in Casablanca for sampling kebabs and tagines from one of the many street vendors and tiny, independent restaurants.

Just a 20-minute stroll east away from the mayhem of the Derb Ghallef souk, you’ll find an oasis of calm and tranquillity. The Horticulture Garden – or Jardin d’horticulture – is a quiet, peaceful open space offering locals and visitors a break from the hustle and bustle of the city. The low-key garden boasts cactus gardens, lawns lined with mature palms and a pond.

In western Maârif, three kilometres (1.9mi) from the Derb Ghallef souk, is the Mohammed V Stadium, part of the Mohammed V Athletic Complex. The stadium, which was named after King Mohammed V of Morocco who ruled the country between 1957 and 1961, opened in 1955 and hosts club and international football games with a crowd capacity of 67,000. It hosts the home games of the Morocco national football team, also known as the Atlas Lions, and is home to football clubs Wydad Casablanca and Raja Casablanca.

A 30-minute walk south of Derb Ghallef is the Museum of Moroccan Judaism, curated and managed by the Judaeo-Moroccan Cultural Heritage Foundation. It is the only museum devoted to the Jewish faith in the Arab world. The Jewish Museum, set in a villa in lush gardens on the site of a former Jewish orphanage, was established by university professor Simon Levy in 1997. Half a century ago, more than 250,000 Jews lived in Morocco, but today only a handful remain. The museum showcases the Judaeo-Muslim culture through exhibits of manuscripts, decorative objects and photographs. It also features a reconstructed 1930s synagogue from Larache, a significant harbour town in Northern Morocco. 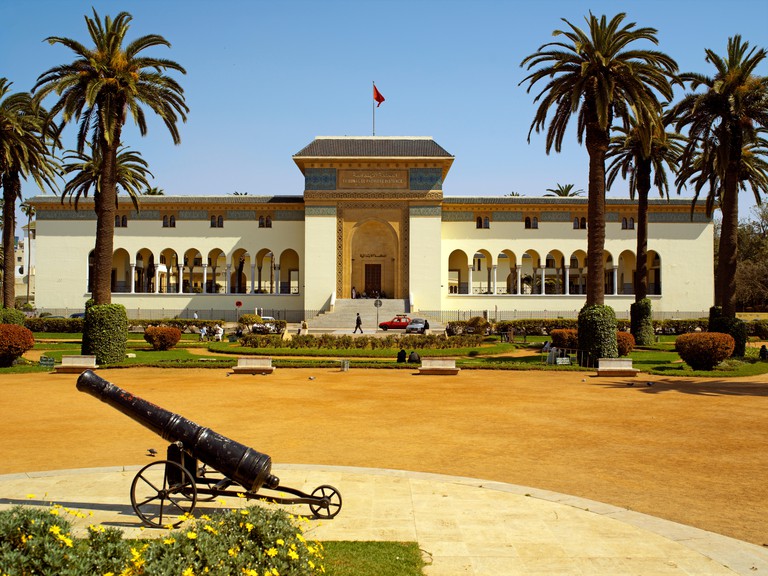 The Palais du Justice Law courts in, Place Mohammed V, Casablanca | © Gordon Sinclair / Alamy Stock Photo
In neighbouring Habbous, just a 2.5km (1.6mi) walk north of Derb Ghallef is Muhammed V Square, a picturesque public square enclosed by beautiful French buildings. A fountain stands at its centre with palm trees and lawns infusing the site with greenery. The square – also known as Pigeon Square due to its popularity with the winged visitors – is a lovely spot day or night (when the buildings are aglow in soft, yellow light) for a coffee or an ice cream. Prestigious buildings such as the Wilaya Building and the Court House call this square home.

A short walk south is the beautiful Mahkama du Pacha – or Mahkamat al-Pasha – meaning the pasha’s courthouse. Built in 1930 by the pasha – or governor – of Casablanca (the son of the Moroccan grand vizier), the courthouse has also served as the governor’s home, a jail and a venue for state functions. The beautiful building, designed by French architect Auguste Cadet, was constructed using traditional methods and is now a highly preserved example of traditional Mauro-Andalusi architectural features such as green tiled roofs, carved cedar wood, colourful mosaics – known as zellij – and grand stucco work. Take in the architecture and interiors, such as the arched main hall and the central courtyard, with a wander through this incredible building.