The Top Literary Landmarks To Visit In Morocco

During Tangier’s time as an international zone, writers from across the world, and especially from the Beat Generation, flocked to this port city in northern Morocco, and the likes of Tennessee Williams and William S. Burroughs are said to have frequented some of its hotspots. Further south in Marrakech, Eleanor Freud was writing about life as a child in Marrakech with her sister and free-spirited mother. Today, many of these venues remain open for business as usual. Here are our top three picks worth a visit if you want to follow in the footsteps of some of the most famous writers who lived or came through Morocco.

Set on a clifftop overlooking the Bay of Tangier, Cafe Hafa opened its doors in 1921, and little has changed since. Writers such as Paul Bowles and William S. Burroughs who were living in Tangier as part of the Beat Generation are said to have frequented this little cafe that only serves mint tea. This popular place is packed with simple tables and chairs to welcome as many people as possible. 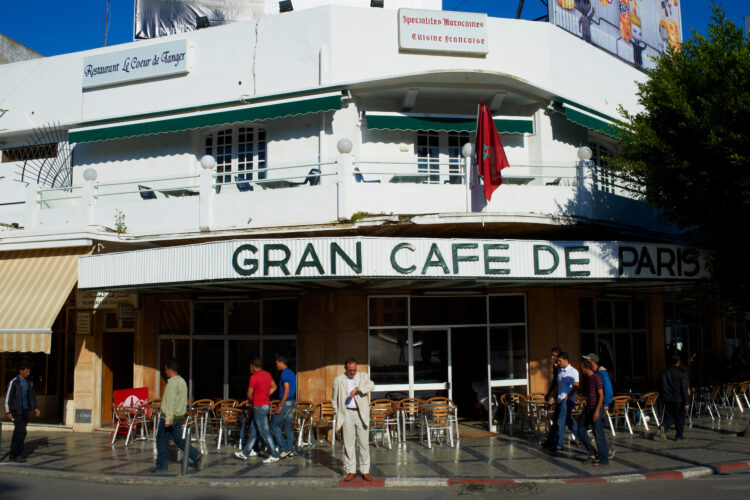 Opening in 1927, the Gran Cafe de Paris in Tangier, overlooking the Place de France, has seen its fair share of literati come through its doors. Still wildly popular with locals and those passing through, not much has changed since this classic cafe first opened its doors over 90 years ago!

The foundouk located in the Kaat Benahid area of the Marrakech medina provided a home to Julia and her two daughters in the film Hideous Kinky, based on Eleanor Freud’s autobiographical novel. Foundouks, also known as caravanserai, housed traders who were travelling through Marrakech. The travellers would sleep upstairs and leave their camels downstairs. Today, when the doors are propped open, you can peek inside these old hotels and get a glimpse of the past.