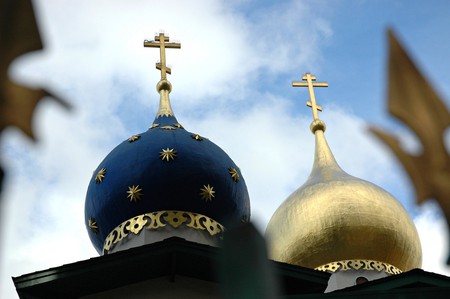 The Morocco Jewish Museum in Casablanca is the only Jewish history museum in the Arab world. It represents a small community, not much bigger than the Jewish community in Myanmar, but embraces centuries of culture and history that bind Jews and Muslims in Morocco. We travel through their story, through Spain, North Africa and through Morocco’s mellahs, Casablanca, and Essaouira, all the way to Israel. 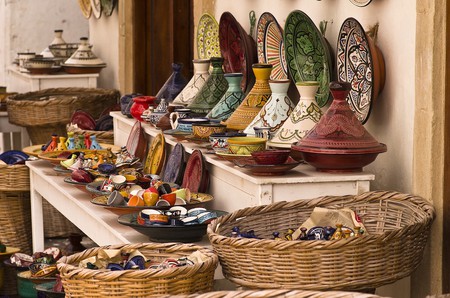 We travel through the jews of Morocco's story / Pixabay

Half a century ago, more than a quarter of a million Jews lived in Morocco, coexisting peacefully with their Muslim neighbors. Today, only a handful remain. But Morocco’s Jewish heritage is far from forgotten. Nestled in a lush garden in Casablanca’s Oasis suburb, the Moroccan Jewish Museum explores and showcases Judaeo-Muslim culture in its full glory. It is the only museum dedicated to Jewish culture and history in the Arab world, and certainly one of the few institutions to detail the story of mutual influence between the two religions in such an enthusiastic, dedicated spirit. 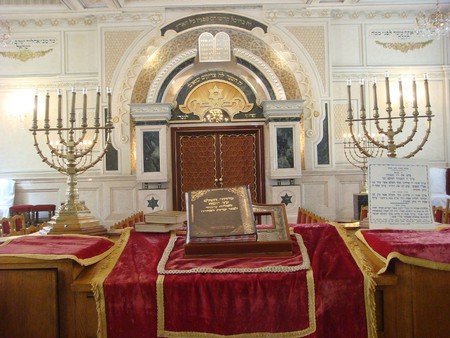 Half a century ago, more than a quarter of a million Jews lived in Morocco, coexisting peacefully with their Muslim neighbours | © David Lisbona / Flickr

And the story is long and complex, and like the dunes of the desert, follows a trajectory of highs and lows. Although the very first mentions of Jewish presence in Morocco date back to the 2nd century BC, it was only in the 7th and 8th centuries AD that the Jewish people began to settle actively in North Africa. At the time, Morocco was going through a period of rigorous Islamisation, initiated by its then-ruler Isdris I – whose family tree, according to popular belief, included the Prophet Muhammad. Many Jews stayed, however, gathering in and around the city of Fez, where Isdris I’s son, Isdris II, later guaranteed them a safe and warm welcome complete with relaxed laws and favorable economic conditions. 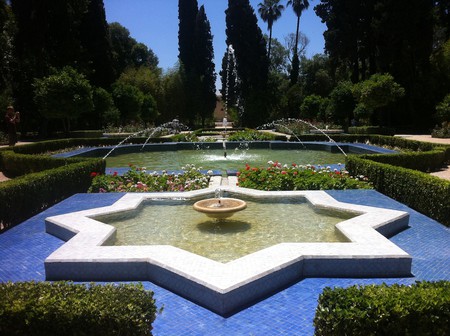 Cities such as Marrakech, Casablanca and Fez saw a sharp rise in population levels / Pixabay

Several centuries later, in the 1490s, another wave of Jews arrived in Morocco’s cities, this time from Spain and Portugal, after an edict had been issued that banished Jews from both countries, forcing them to take refuge in neighboring North Africa. Cities such as Marrakech, Casablanca and Fez saw a sharp rise in population levels, and, although Judaeo-Muslim coexistence was never entirely free from periods of conflict, hundreds of thousands of Jews made Morocco their home, where they contributed visibly to the country’s economy, trade and culture for the five centuries that followed.

Everything started to change in the late 1940s, when the founding of the State of Israel coincided with increased, religion-driven repercussions against Morocco’s Jewish community. Discrimination against Jews, economic sanctions and fear of persecution were all factors in the subsequent mass emigration, where a vast majority of Morocco’s Jewish population left the country for Israel.

In Essaouira, a city on the Western coast of Morocco where Jews had once made up almost half of the population, and where the Jewish and Muslim communities lived in peace, the mellah – a walled Jewish quarter – now stands in ruins. The Chaim Pinto synagogue, once the most significant place of worship for Essaouira’s Jews, sits in a dilapidated building surrounded by rubble in spite of recent renovation. In Casablanca, no Jews live in the mellah anymore; in fact, Casablanca is the one city where Morocco’s Jewish heritage does not belong only to the past. Home to over 30 synagogues, numerous kosher restaurants and Jewish schools, Casablanca appears to be the perfect spot for a museum whose mission it is to showcase the past and the present of a story so complex and suffused with paradox and tension as that between Jews and Muslims. 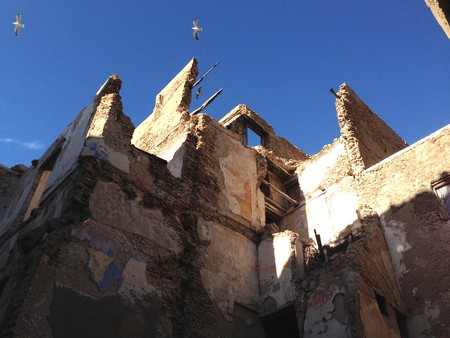 And yet, despite these difficulties, Casablanca’s Moroccan Jewish Museum appears to have found a magic formula: the key is to look beyond religious differences, and to focus instead on cultural similarities. The museum’s collections tell a story that spans clothing, custom, art and architecture. If fashion has anything to do with identity, then the clothing worn by Jewish and Muslim Moroccans exemplified a harmonious coexistence; Jewish women’s attire was, on the one hand, inspired by Morocco’s traditional patterns and textiles, and, on the other hand, comprised religious elements such as scarves and wig-like head coverings.

But this mixed heritage goes even deeper, with inspiring examples of music and literature that crossed the boundaries between the two cultures. Zohra El Fassia, star of Morocco’s pop music scene in the 1940s and 50s, was an artist of Jewish faith born in Fez, who later moved to Israel but continued to sing in Arabic. From the 12th century Sephardic Jewish philosopher Moses Maimonides who spent much of his life in Morocco and Egypt, to North Africa’s numerous Judeo-Arabic newspapers of the 19th and 20th centuries, which even employed a specific language to address both the Jewish and non-Jewish communities, literature united the two cultures, interlacing them to the point where the hybrid became a logical unity. Qasida, a form of poetry that developed centuries ago, was employed by Jewish and Muslim poets alike; the same legends were told by both groups; proverbs broke the boundaries of language, incorporating Hebrew and Arabic elements – and, according to one of them, a proverb never lies.

It may come as a surprise that this harmonious clash of cultures was not exclusive to Morocco – it also existed in the Middle East for centuries. Before 1948, Iraq’s Jewish population numbered over 100,000. With a history dating back to the Babylonian times around the 6th century BC, the Jews of Iraq reportedly perceived themselves as Jewish Arabs, thus fusing two seemingly paradoxical identities – but only for a time. In 1948, as the Iraqi government forced a number of sanctions on Jews, prohibiting them from working in public offices or conducting banking activity, tensions between Muslims and Jews began to rise. Currently, there are almost no people of the Jewish fate in this country of over 30 million, and renewed tensions between Israel’s Jewish communities and the Iraqi are palpable. Baghdad, which was once home to 50 synagogues, now only has one: the somewhat nostalgically named Great Synagogue of Iraq. Transformed into a small museum, it is another wistful reminder of a once harmonious coexistence between two faiths. 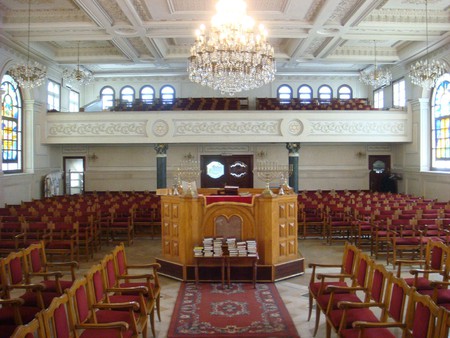 Baghdad, which was once home to 50 synagogues, now only has one: the somewhat nostalgically named Great Synagogue of Iraq | © David Lisbona / Flickr

Most of these gardens of memories, or indeed remembrance, diminish in size and number, making Casablanca’s Moroccan Jewish Museum an incredibly special cultural gem. As the museum’s director, Zhor Rhihil, argues, similar museums must be erected in the Arab world to preserve a fascinating, and fundamental part of history. “As museum curators, we regret the heritage we lost,” he attests. “I believe that any Jewish Moroccan component is essentially Moroccan before being Jewish. Today, we feel that we have lost something of that Moroccan characteristic. It was that feeling that drove a number of Moroccans, regardless of their faiths, to join hands.”

And perhaps his message did reach a substantial audience: in early 2013, to mark the renovation of the Slat Alfassiyine synagogue in Fez, King Mohammed VI of Morocco called for the restoration of Jewish temples across the country, acknowledging them as “not only places of worship but also spaces for cultural dialogue to renew the founding values of Moroccan civilization.”

And while this is a small step towards a better cultural understanding for North Africa, museums dedicated to Jewish history and culture abound in Europe and the United States. Some of the most recent openings include Warsaw’s long-awaited, ultra-modern Museum of the History of Polish Jews, which opened its doors in spring 2013, and the Jewish Museum and Tolerance Center in Moscow, launched just a year before.

And although the Moroccan Jewish Museum is one of a kind in the Arab world, not all is lost; the story of North Africa’s Jews is still being told by many. Kamal Hachkar’s award-winning film Tinghir-Jerusalem: Echoes from the Mellah dove deep into this heritage with interviews, memories and personal accounts, told directly by Jews who once lived in Morocco. More tangibly, the David Amar World Center for North African Jewish Heritage, located in Jerusalem, is a hidden gem and a wonderful tribute to Morocco’s Jews – the museum, reconstructed as a traditional Moroccan palace, reminds its visitors of the vibrant heritage which was lost 60 years ago, but which is still carefully preserved in many minds and cultural institutions.