The Mellah: Discovering the Hidden Jewish History of Marrakech 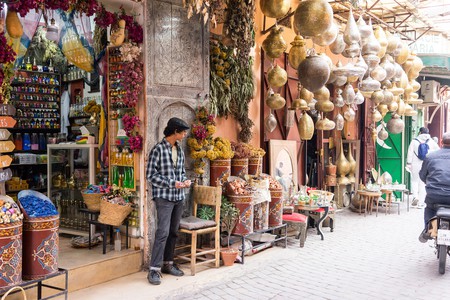 Youssef Safine has lived on a narrow street called Talmud Torah his whole life, a few doors down from the historic Slat Al Azama Synagogue. That is where he, as a Muslim child, learned the stories of the Mellah from an elder of Marrakech’s Jewish community.

“I was a curious child, so naturally I wanted to know what all those people were doing in this building, which is just a few doors away from my house,” Safine says, sitting in the richly decorated prayer hall of Slat Al Azama, Marrakech’s ‘synagogue of the exiles’.

Slat Al Azama is the last of the 30 synagogues still in use in the Mellah (the name given to a Jewish neighbourhood in Morocco). Nowadays, Safine regularly visits as one of just a handful of Muslim Moroccans fluent in Hebrew and qualified as an official guide to Jewish sites across the country. 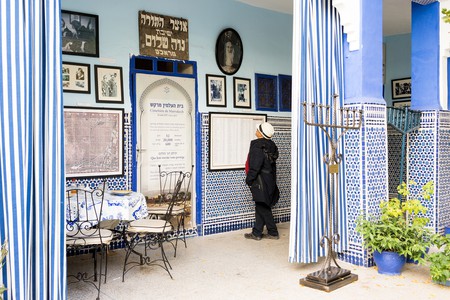 Safine continues: “When I visited as a child, I used to spend time with a kind old Jewish man, David Perez, who was the son of a famous scholar. He was blind, so I would guide him home. And during those walks, he would explain many things about Judaism and the history of the Jews in Morocco.

“[David] once told me that every person I met was like an encyclopaedia, and I should always take the chance to learn something from them. I am grateful for that advice,” Safine says. Now, he is his own encyclopaedia, full of stories about the unusual neighbourhood he grew up in.

A city within a city

Tucked between two herbalist shops, Safine points out the large brick arch leading into the Mellah. In the past, it had a gate that was locked at night. To those on the outside, the Mellah came to be seen as an almost sanctified space. Even today, when older Marrakshi’s pass through the gate of revered Rabbi Mordechai Ben Attar, they touch the frame and then kiss their fingers. 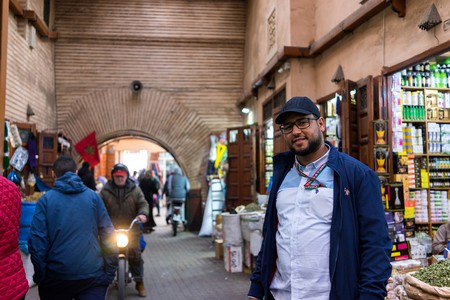 Like all Moroccan mellahs, Marrakech’s Jewish neighbourhood is walled and located next to the royal Kasbah. Historically, the sheltered area provided the community with protection. This containment might be seen as punitive, but in reality, Jews sustained their culture in a relatively autonomous community within.

Safine greets a few Jewish traders still in business around Place des Ferblantiers, the piazza on the Mellah’s doorstep, where Jewish craftsmen once worked tinplate into teapots, trays and lanterns. 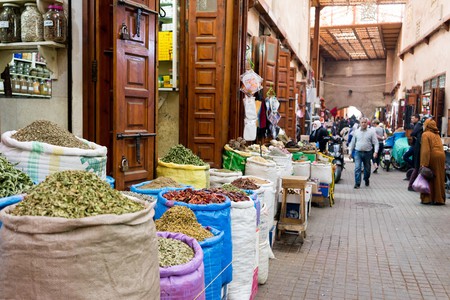 There’s Isaac Ohayon, who runs a thriving hardware store – his Muslim colleague is negotiating the price of brass sheet with a harried builder. Nearby is a textile shop run by Moshi Halioua, whose forebearers sold cloth up and down the Draa Valley. In the jewellery souk, which was once almost exclusively Jewish, only Izak Dahan remains. There’s even a kosher butcher, Salomon Abuhassera, although business is tough these days with so few customers.

Today, most Marrakshi Jews live in Gueliz, the so-called ‘New Town’. The new Beth-El Synagogue is located there, but every Shabbat, Ohayon still chooses to walk the 3.5 kilometres (2.2 miles) back to the Mellah to help sustain Slat Al Azama Synagogue.

The last synagogue in the Mellah

Jewish public prayers can only take place with a minyan, a quorum of ten adult men, and these days, every man counts in the Mellah. There are just 120 Jews still living in Marrakech, down from 30,000 in the 1940s. 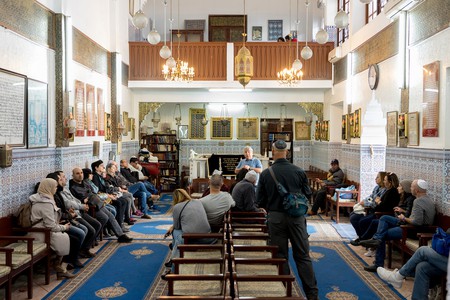 Tourism in Marrakech is booming, and in 2017, an estimated 50,000 Jewish tourists visited the country on heritage tours | © Btihal Remli / Culture Trip

Morocco’s Jews were shielded from the horrors of World War II, thanks to the King’s refusal to deport of any of his 250,000 Jewish subjects. But the creation of Israel in 1948 and the rise of post-colonial Arab nationalism prompted a great aliyah (emigration) to Israel, France, the United States and Canada. By the time Safine was born in the early 1990s, Marrakech’s Jewish population had tumbled to a few hundred. Then, even David Perez – Safine’s mentor – vanished.

Walking up the main street of the Mellah’s spice souk, which is lined with mountains of vibrant saffron, turmeric, cloves and rose petals, Safine points out the results of the renovations that took place in the mid-2010s and cost an estimated 192.7 million Moroccan dirhams (£15.4 million). “[People are] happy about the return of Jewish names to the streets,” Safine notes. “The King ordered it done when he visited, and that means a lot. It means [Jewish] history won’t be lost.” 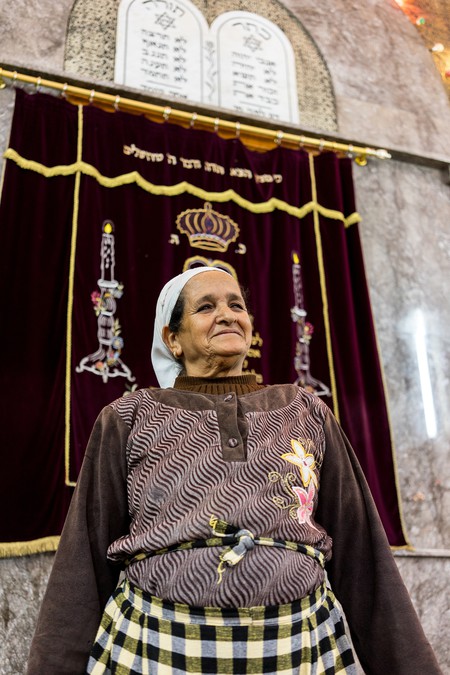 Among the replastered facades and upgraded stores, signs of the past peep through, such as a street lined with balconies (Muslim homes have no street-facing windows); old silver shops, once a traditional Jewish trade; a guest house named after the rabbi who once owned it; and a handful of ancient door hinges adorned with the Star of David.

Arriving at the synagogue, Safine passes through the sun-drenched, blue-and-white tiled patio, and into the cool of the prayer hall. Fatima, an older woman, is washing the carpets. Saadia carries a tray of sweet tea and almond biscuits. These Muslim women have cared for the synagogue for years. 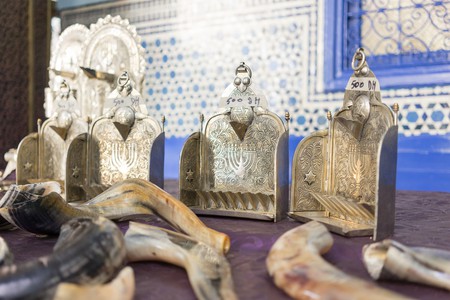 In 2017, as part of an event organised by Mimouna – a non-profit association of young Muslims dedicated to preserving Jewish heritage in the kingdom – Safine and all the residents of Talmud Torah broke their Ramadan fast in this synagogue’s courtyard.

Safine points out a row of sepia-tinted pictures that line the patio. Children from mountain villages came here to learn the Torah in the past. Now pilgrims journey the other way, visiting villages in search of some 600 Jewish shrines, which remain as a testament to a history that stretches back to the fall to the First Temple in Jerusalem in 587 BC.

As Safine tells the story of David Perez, a large family group of nearly 20 Israelis fill the synagogue. It is Monday morning, so they prepare for prayer, taking the Torah from the Ark and filling the room with their ancient song.

A Jewish cemetery full of history

Before leaving the synagogue, the Israeli family asks Safine if he can take their picture. They gather in front of the Ark – a multigenerational family returned to the land of their grandfather who stands bent almost double in the centre. While it is clear that Marrakech’s Jewish community stands on the precipice of extinction, this large, lively family suggests the Mellah still has the potential for a multicultural future. 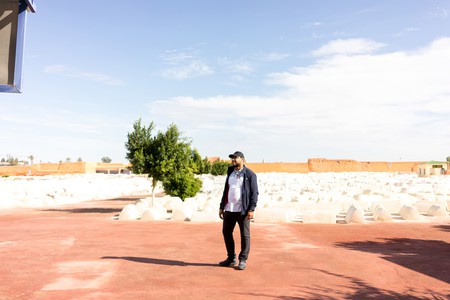 “For the Sukkot festival that just passed, I hosted a group of 20 Jewish visitors, and we kept meeting other large groups of 25, 30, 35 people,” Safine says. Tourism in Marrakech is booming, and in 2017, an estimated 50,000 Jewish tourists visited the country on heritage tours. Safine’s groups are often overwhelmed by the warm welcome they receive in Morocco and are grateful for his guidance – so much so that the first international trip he took in 2018 was to Israel, on the invitation of a rabbi from one of his groups.

Now, sitting in the shade of a pergola looking out at a sea of radiant white tombs in the eight-hectare (19.8-acre) Miara Cemetery, the largest Jewish cemetery in Morocco, Safine points out the graves of important rabbis lining the perimeter. Mordechai Ben Attar is here along with Kabbalist Hananiah Ha-Cohen (who is considered a patron saint of Marrakech) and Raphael Perez, David’s father. 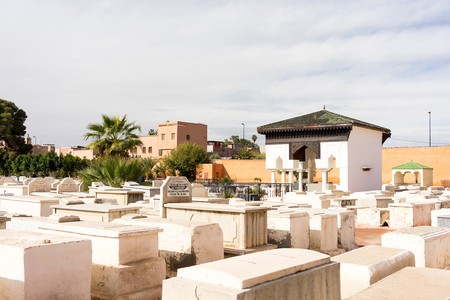 “When I visited Israel, I wanted to find Mr Perez, who has remained in my heart all these years. I thought he was dead,” Safine recounts. “But by some unbelievable luck, I met the granddaughter of his brother, and I got the chance to see him again and thank him for all he taught me.”

Safine shows an Israeli family how to navigate the intricate map of graves. They crowd around him, curious as to how and why he speaks Hebrew so well. They ask him if it is safe to travel around Morocco. He assures them it is and says he had the same question when he visited Israel. Then they laugh together, surprised that here, in this ancient Jewish cemetery in Marrakech, they find so much in common. 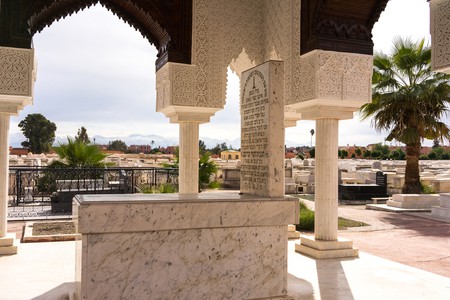