The High Cost of High-Endurance Sport

Ironman triathletes may look like beautifully honed specimens – the Greek gods of the 21st century. But while their bodies are capable of incredible physical performance, how close are they to breaking?

Regular exercise, of course, is an essential part of a healthy lifestyle, but endurance events are another type of exertion altogether. A one-off marathon, or Ironman, or any of the events that proclaim to be the longest/hardest/toughest, means recovery is fairly straightforward. But participating in endurance sports on a regular basis – as many do – can lead to a wide array of physical problems, particularly concerning the heart. Such issues include atrial fibrosis (thickening and scarring of the heart’s connective tissue), interventricular septum (holes in the heart), increased susceptibility to atrial and ventricular arrhythmias (abnormal heart rhythms), and calcium buildup in the arteries (which increases risk of plaque formation and a subsequent heart attack).

According to a study presented at the Canadian Cardiovascular Congress in Montreal, regular exercise reduces cardiovascular risk by a factor of two or three, which is clearly a fantastic health benefit. However, replace that level of stress with the vigorous demands of running a competitive marathon, and the risk is actually increased, by a factor of seven.

In regard to extreme endurance events, potential damage isn’t limited to just the heart.

The medical journal Mayo Clinic Proceedings published research on the potential adverse effects that occur as a result of endurance events. In the article, cardiologist James H. O’Keefe argues, ‘On the basis of animal and human data, cardiovascular benefits of vigorous aerobic exercise training appear to accrue in a dose-dependent fashion up to about one hour daily, beyond which further exertion produces diminishing returns and may even cause adverse cardiovascular effects in some individuals.’ 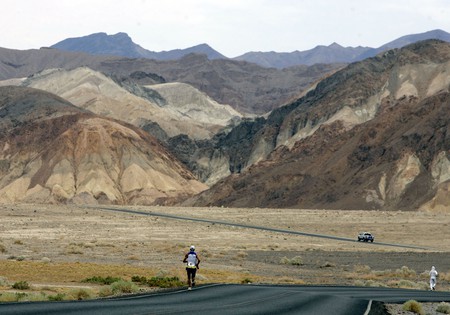 The Barkley Marathons is a 100-mile race (161km) across an unmarked route near Tennessee’s Frozen Head State Park that includes 60,000 feet of elevation (18,288 metres); as it’s unmarked, it’s not uncommon for people to get lost for hours at a time. Badwater 135 is run over 135 miles (217km) through California’s Death Valley in July, when the average high temperature is above 110 degrees Fahrenheit (43 degrees Celsius). The Mount Marathon race near Seward, Alaska, may only be between 3.1–3.5 miles long (5.0–5.6km), but it gains more than 3,000 feet (914 metres) of elevation and forces racers to scale an exposed cliff before descending back down the mountain.

One of the events that bills itself as ‘the toughest’ is the Marathon des Sables (MdS) in the Sahara desert, south of Morocco. The 2017 edition is the equivalent to five-and-a-half marathons – or 150–156 miles (241–251km) – to be run over six days. Everything competitors need will have to be carried on their backs. The ground will be uneven and rocky, except for the 20% of the route run on sand dunes. Temperatures will reach 120 degrees Fahrenheit (49 degrees Celsius). The middle stage is 51 miles (82km) long, so there’s a good chance it’ll be dark by the time many competitors complete it. 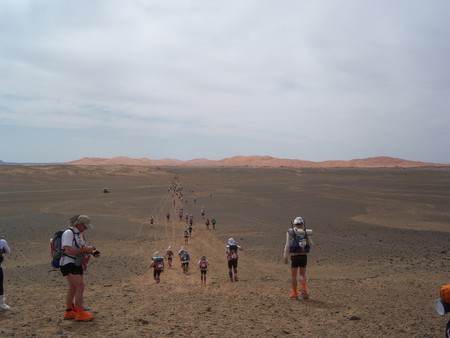 It would be great to do a reconnaissance of the race beforehand, but the meticulously planned routes and actual formats change every year, with the race director and his team holding them secret until the day before the event starts. Once each stage is finished, the only place to recuperate is the ‘village’ of tents that moves with the competitors.

American Krissy Moehl is an ultramarathon athlete who specialises in trail running. She won a gold medal at the Vermont 100 Mile Endurance Race, and in 2007, set the women’s record for the Hardrock Hundred Mile Endurance Run in Colorado’s San Juan Mountains. Moehl is also the author of Running Your First Ultra: Customizable Training Plans for Your First 50K to 100-mile Race and the race director for the Chuckanut 50k in Fairhaven, Washington.

Moehl is a regular runner of ultramarathons, but she’s well aware of her limits in terms of what she enjoys and what she considers her physical and mental well-being. ‘For me, knowing my physical capabilities is very important to me, so distance doesn’t really bother me.’ She explains, ‘The more exposure and technical something becomes, then I’m not going to do it. Sheer cliffs, or scrambles, are not for me. I appreciate that challenge, but I like living. The potential risk and damage are not worth it to me. I choose to do these things because I understand and enjoy them. What’s the point if you don’t enjoy it?’

There are certainly events that pose a greater threat to the human body than others. While every ultramarathon is physically demanding, the nature of such events is to test humans and see what they’re capable of. So, such events have added extreme temperatures to their list of challenges – hot or cold – or difficult terrain such as mountains, valleys, or jungle (i.e. the kinds of things that Moehl stays away from). After all, when 100 miles isn’t enough to get you breathing hard, try the same distance with huge elevation, or across snow with Baltic winds assaulting your face. 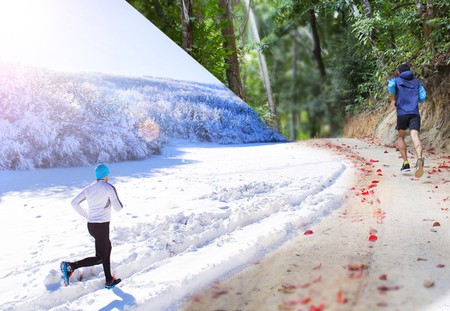 According to Mike Tipton, professor of human and applied physiology at the University of Portsmouth, the detrimental effects that these environments cause is more than significant. ‘Endurance performance deteriorates when ambient temperature increases or decreases from the optimum of 10–15°C,’ says Tipton. ‘Assuming people continue to exercise – thus producing heat – in the cold, peripheral cooling and muscle cooling are potential problems. But in the heat, increasing deep body temperature leads to heat exhaustion, and in turn serious illness as a result.’

None of which is enough to prevent people from signing up for the next challenge. In addition to the difficulty of any race, it goes without saying that the less prepared an athlete is going into an event, the more damage they will do their body. For Tipton, ‘Even a moderately stressful event can be made into a much greater challenge to an individual depending on how they prepare for it and what strategy they execute when undertaking it.’ He continues, ‘It should also be remembered that a major source of heat stress is exercise (80% of the energy consumed is released as heat in the body), so how hard you run and for how long are also key determinants of the stress placed on the body independent of the environment. In addition, other important variables are obvious factors such as your clothing, hydration, and nutrition.’

Rin Cobb, a clinical and sports performance dietitian, has developed diet plans for athletes competing the MdS, as well as completing the ludicrously gruelling event herself. For her, like Tipton, it seems that very little is off-limits, assuming the correct action is taken before, during and after a race. ‘If you’ve done an extreme endurance event, it is key to allow your body to rest and refuel – carbohydrates, protein, and hydration are the most important – but even the fittest athletes will take some time to truly recover properly,’ Cobb explains. ‘In terms of whether something is too dangerous, the only limits are those that you set yourself. With the right training and preparation, it’s only your mind that can stop you. Sometimes we may need to revisit our expectations of an event, but for many, it’s the challenge and demanding nature of these events that has sparked that interest in the first place.’

Interestingly, Cobb makes no recommendations more complicated than eating the correct food and resting when it comes to post-race recovery. Similarly, Tipton says, ‘Evidence is accumulating that post-exercise ice baths, chambers etc., are of limited or no utility.’

While athletes dedicate a large part of their focus to their physical health, there is certainly a short-term mindset that rarely goes beyond their retirement from elite sport (if that far). It’s not uncommon for professional athletes to keep competing until their body tells them they have to stop, and even then they may not listen. Athletes that compete in extreme endurance events are no different; in fact, their determination to prove themselves ‘against’ such events can lead to far greater risks in sports that already carry more danger than most.

The tricky thing is knowing the line between pushing yourself and hurting yourself – before you cross it. There’s been ample research to try and find that line, but the variables are vast, and the best practices to avoid long-term damage seem keyed to individuals, as opposed to general rules anyone can follow. Everyone knows what constitutes too little exercise, but there’s a huge gap of uncertainty surrounding how much exercise is too much.