The Best Cultural Hotels to Book in Fes, Morocco 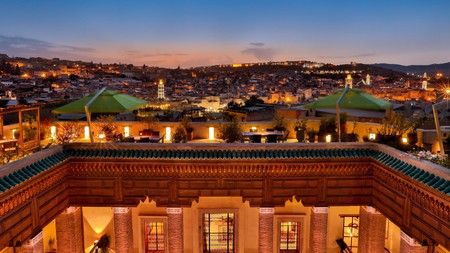 Karawan Riad in Fes dates back to the 1600s, and promises a great stay to this day | Courtesy of Karawan Riad / Expedia

Known as Morocco’s cultural and historical capital, Fes is a city of treasures – from the Andalusian architecture to the Unesco-protected old medina.

Fes has the feel of a true Arabian walled city. The ancient area of Fes El-Bali is home to the labyrinthine medina, as well as the University of Al Quaraouiyine, the oldest existing educational institution in the world. Explore the vibrant souks before becoming pleasantly lost in the winding alleyways that lead to some of the best hotels in Fes. Frequently hidden behind inconspicuous doorways that open to reveal lush courtyards, these great places to stay – often known as riads – are bookable on Culture Trip.

Looking for a truly cultural experience? Then book Culture Trip’s 13-day Moroccan adventure, where you’ll be guided through this enchanting landscape by our local insider. 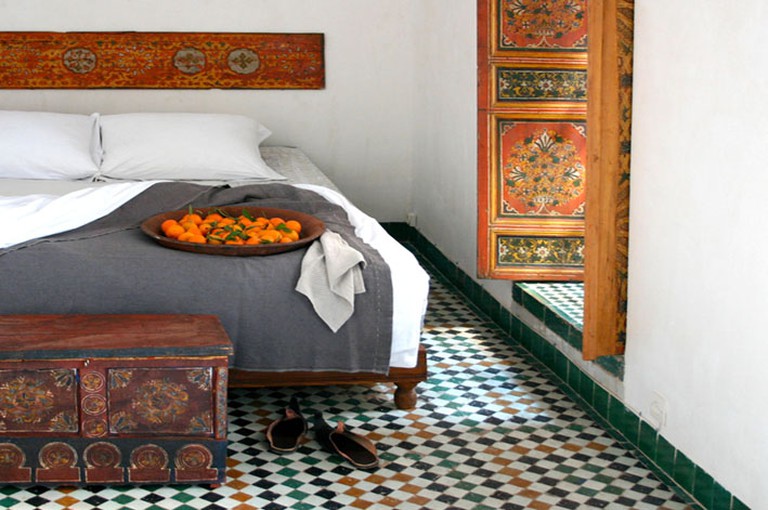 © Dar Seffarine
If this 600-year-old dar (traditional Moroccan townhouse centred around an internal courtyard) wasn’t a hotel, it would almost certainly be a historical attraction. It took 25 master craftsmen two years to restore the building to its original magnificence, resulting in a central patio that wouldn’t look out of place in the Alhambra in Granada, Spain. Columns of intricately carved plasterwork rise up from a mosaic-and-marble floor, towering above 4-metre-high (13ft) cedar doors, bearing patterns of hypnotic complexity. Breakfast and dinner are served on a rooftop terrace overlooking the medina. 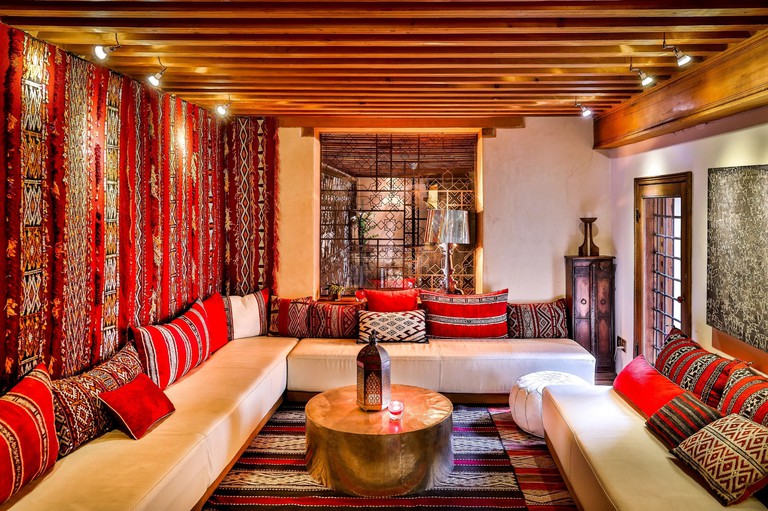 Courtesy of Karawan Riad / Expedia
Back in the 1600s, this was one of the grandest hotels in Fes. All seven individually themed suites recapture the style and ambience of the original building, but perhaps none more so than the Chergui, which features a bathroom overlooking the vertical garden, a balcony onto the central courtyard and a secret mezzanine lounge accessed by a hanging staircase. Relax in an elegant, Ottoman-style spa, and try modern Moroccan fare at the Karawan Restaurant. 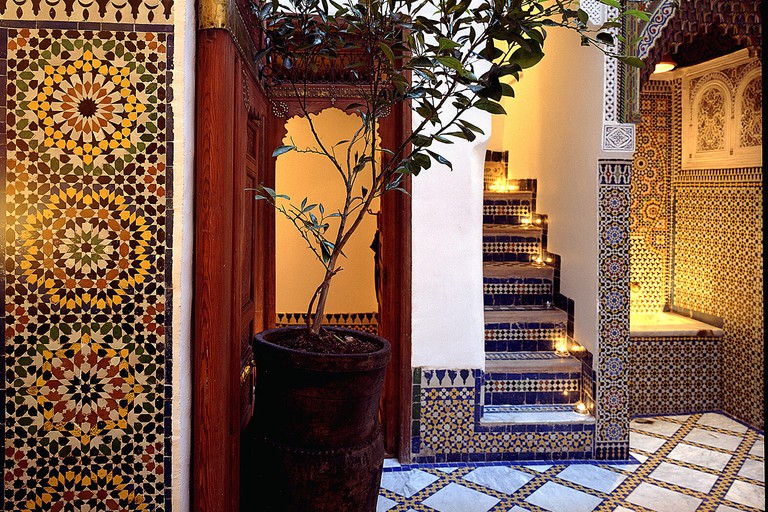 Courtesy of Riad Numero 9 / Expedia
Traditional Moroccan elegance is offset by contemporary French and Oriental touches at this boutique B&B. It was bought and restored by an American designer, who has lived in Paris and Hanoi (amongst several other places). A middle-class residence dating back to the 1700s, the building now has three suites: a standard double with an ensuite several steps lower than the bedroom, a junior suite with a king-sized bed, and, occupying the entire third floor, a two-room master suite. All display the Riad’s original hand-carved wood, plasterwork and delicate tile mosaics. 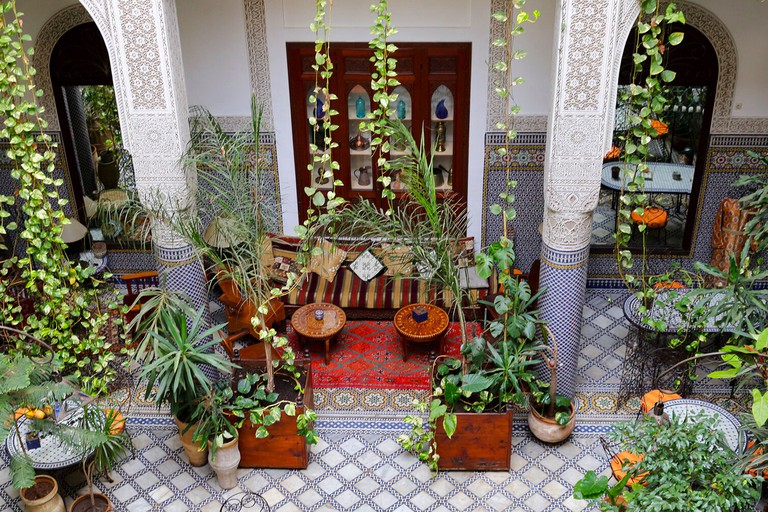 Courtesy of Riad Al Bartal / Expedia
Riad Al Bartal offers rooms and suites centred around an Arab-Andalus courtyard of filigreed columns and elaborately tiled floors. Filled with greenery and soundproofed on every side from the outside world, it’s the perfect spot for breakfast (included in the nightly fee) or an afternoon mint tea. The Riad’s typical medina-style accommodations are themed around items acquired by the owner on his travels throughout Africa and South America. Unusually, parking is available right outside the riad. 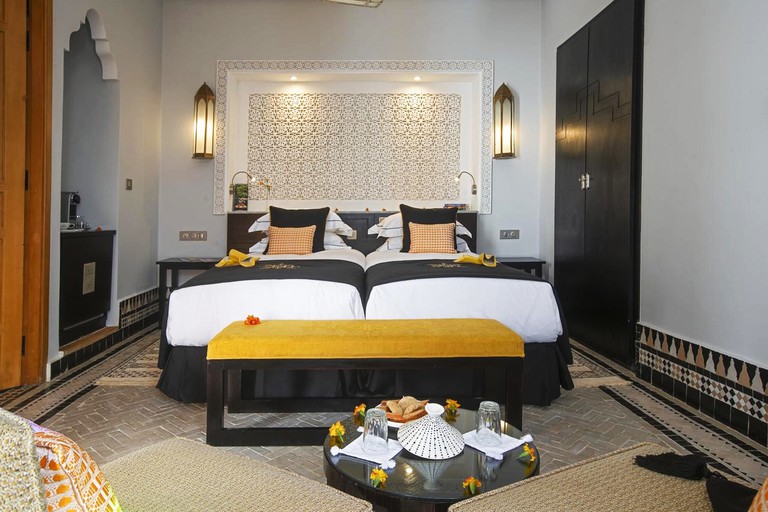 Courtesy of Palais Amani / Expedia
The five-star Palais Amani occupies an opulent riad that was formerly home to one of the most prominent families in Fes. After standing empty for over 25 years, the building was rescued from oblivion by husband-and-wife team Abdel and Jemima. They now offer a range of experiences through which to imbibe Moroccan culture, from chef-led tours of the souk to lessons in henna skin art. Book the tasting dinner at onsite restaurant Eden, where a five-course tasting menu is carefully paired with a flight of Morocco’s best wines. 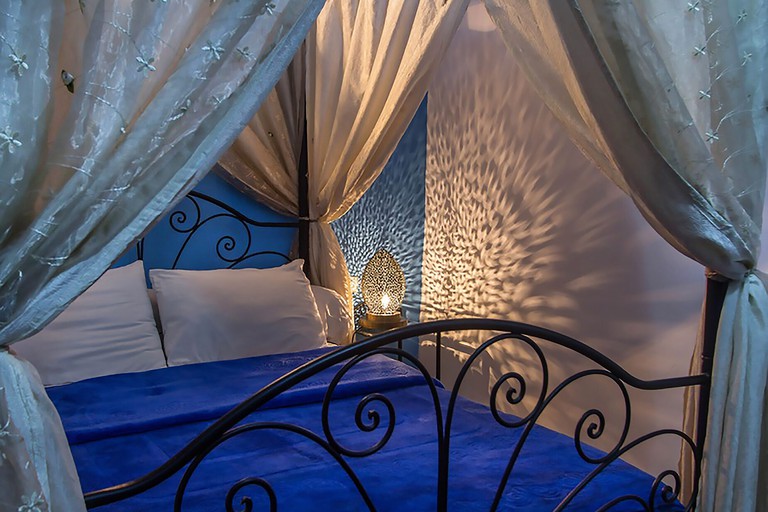 Courtesy of Dar Tahyra / Hotel.com
If you want an affordable option in the centre of the bustling old medina, Dar Tahyra is one of best hotels in Fes for you. The owner of this small but sweet hotel, Driss, is welcoming, as are the chefs who will prepare a traditional Moroccan breakfast to start the day. It is not uncommon here to be invited into the kitchen to join the cooking process. With beautifully decorated rooms, sleeping between two and six people, this is a perfect riad for friends and couples alike. Head up to one of two terraces to enjoy the views. 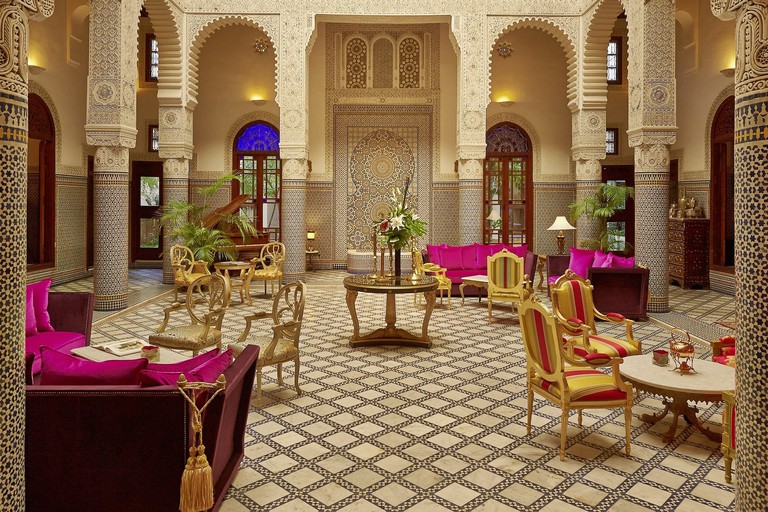 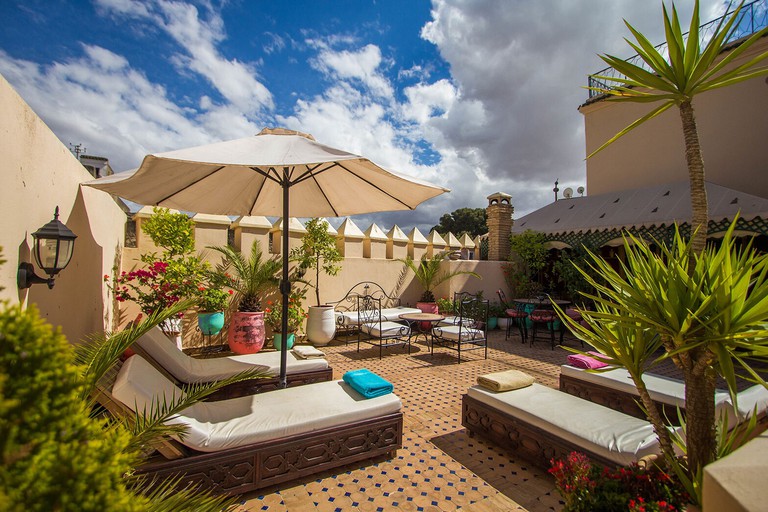 Courtesy of Riad Fes Baraka / Expedia
Riad Fes Baraka welcomes you into a traditional, charming house, renovated respectfully to suit the city’s authentic style. Inside, you’ll find individually decorated rooms surrounding an open patio. Take a dip in the onsite pool, or experience a traditional Moroccan hammam. Chef Samira will whip up a feast of tagine, couscous salads and pastilla in the onsite restaurant – plus, you can join a half-day cooking workshop to learn traditional techniques yourself. 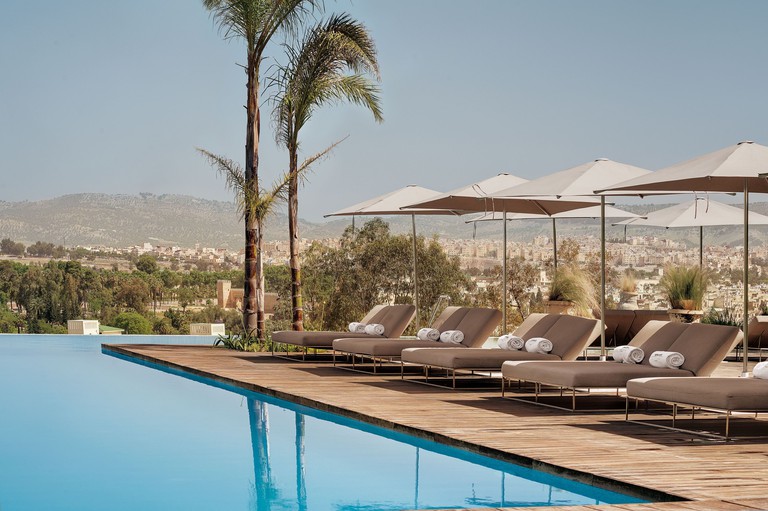 Perched on the hills surrounding Fes, the infinity pool at Hotel Sahrai is a real draw, boasting expansive views over the city below. Expect chic contemporary architecture with interiors styled by French designer Christophe Pillet at this five-star hotel. Indulge in a signature Stress Relief massage at the Givenchy spa before heading to the Jungle Bar for tapas and homemade sangria. Alternatively, book a table at the coveted Relais de Paris Restaurant for French brasserie cuisine. 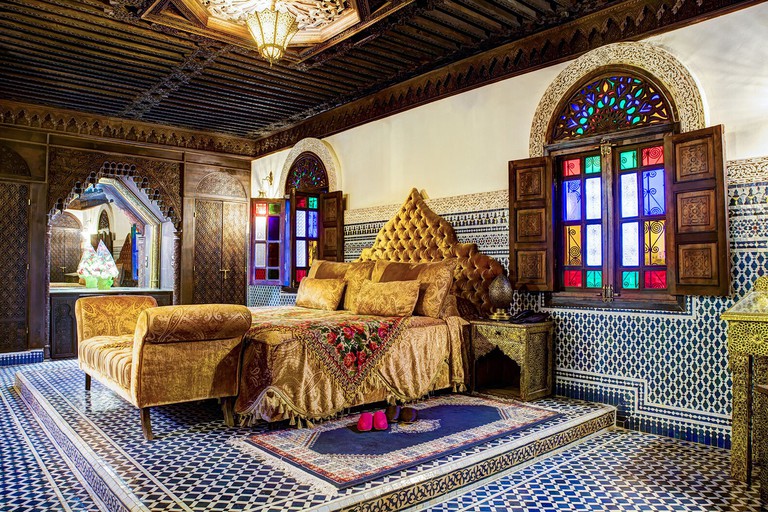 Courtesy of Riad Salam Fes / Expedia
Maximalist decor defines the interior of this five-star hotel; expect dazzling geometric tiles, velour armchairs and multi-coloured stained-glass windows. Choose from eight luxurious rooms, including the Ambassador Suite, with its panoramic views, and the Royal Suite, complete with king-sized beds and copper chandeliers. There’s a spa offering hammam and massage treatments, as well as a rooftop restaurant. Book the tour of the medina ramparts to learn more about the city. 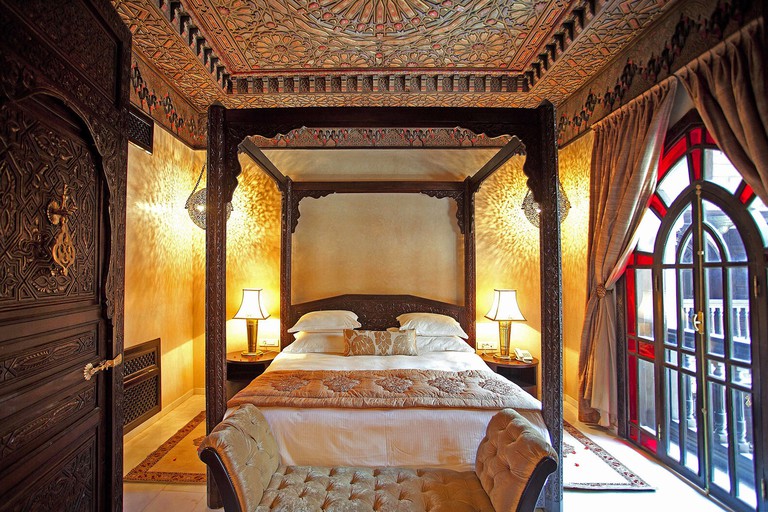 Courtesy of Palais Shéhérazade & Spa / Expedia | Courtesy of Palais Shéhérazade &amp; Spa / Expedia
Located in the Layoun area of Fes, this hotel has an idyllic setting, made up of palm trees, inviting pools and majestic Moroccan architecture. It is undoubtedly deserving of its palace title. Two luxurious riads contain 24 suites, ranging from Junior to Royal, each with ornately carved furniture and luxurious bedding. Traditional Moroccan tea and pastries are offered on arrival. Book an “haute couture” beauty treatment in the Anne Sémonin spa, which features a Jacuzzi, an outdoor pool and a hammam.

For something different that you’ll never want to leave, read our rundown of the best hotels in Morocco – bookable with Culture Trip.