The 10 Best Bars in Casablanca, Morocco 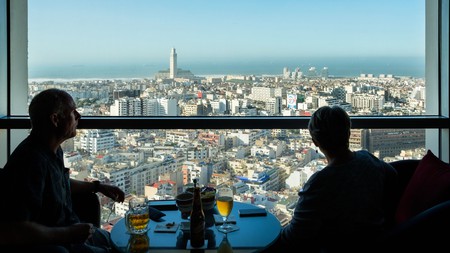 Casablanca’s bar scene has been evolving rapidly in recent years, with innovative concept bars to entertain its metropolitan bons viveurs. You’ll find bars with breathtaking views, old favourites that have stood the test of time and some hidden gems that both locals and visitors enjoy.

Sky-bars have become a bit of a thing in Casablanca, and the highest one is Sky 28. This art deco-style penthouse, cocktail and tapas bar sits 28 floors up at B-Twin Center inside the Kenzi Tower Hotel. The upscale bar is quite pricey but offers a breathtaking panoramic view of the city, making it worth the price tag at least once. It is worth checking their Facebook page, as they often offer special deals on drinks and tapas.

Achingly chic yet relaxed is Skybar, a rooftop restaurant and bar on top of Hotel Villa Blanca at the Corniche, a popular promenade in Ain Diab district. The deck-style terrace overlooks the ocean and has an island vibe that will make you feel like you’re in Ibiza. Enjoy a crisp white wine with excellent sushi at the hour of maghreb (sunset), and dance under the stars once the party gets started.

If you’re after a more relaxed urban vibe where you can unwind at the end of a busy week, then the James Rooftop is for you. Located in Moulay Youssef – the art-deco district of Casablanca – it’s famed for the light effects at sunset and views of the Église du Sacré-Coeur, a glistening white art-deco cathedral. The rustic wooden rooftop bar features cosy corners where you can settle in for the evening and enjoy beers and Tex-Mex-style tapas while listening to chilled-out beats played by local DJs.

Le Petit Rocher (Little Rock House) on the Corniche was established in 1932, starting as a waterside bistro cottage that also functioned as a lighthouse. It has moved with the times and is a modern seafood restaurant today, where you can enjoy a drink with a stunning view of the Atlantic.

Located close to Le Petit Rocher is the stylish and laid-back Le Cabestan, a lounge bar and restaurant founded in 1927. It’s frequented by Morocco’s high-profile residents – from politicians and designers to stars of the local electronic music scene – who all come here for spectacular views of the rocky coast and food by executive chef Fabien Caboy. Perfect for an apéritif, Le Cabestan is also rumoured to serve the best cocktails in town.

Bar, Cafe, Moroccan, European, Mediterranean, $$$
Facebook
Email
Twitter
Pinterest
Copy link
Share
Map View
No list of Casablanca’s historic haunts would be complete without a mention of Rick’s Café, despite it being a relative newcomer. Converted from a traditional riad, you will find it on the edge of the Medina near the Hassan II Mosque. Rick’s Café was the vision of former American diplomat Kathy Kriger who worked in Morocco. Opened in 2004, it pays homage to the 1942 Hollywood classic film Casablanca and its famous “gin joint”. Be prepared to fall in love with this charming location as you enjoy dinner and the house cocktail, the Sour Jadid, named after its address on Boulevard Sour Jadid. There’s also live music, from jazz played on a 1930s Pleyel piano to Cuban and Brazilian sets and Arabesque stylings.
Open In Google Maps
248 Rue Sour Jdid, Casablanca, Morocco
+212522274207
Visit Website
Give us feedback

If you are a wine lover, there is only one place to visit in Casablanca. The Secret Wine Gallery, a French-style cellar bar decorated with dark blue walls, is a cosy spot to relax over a glass of wine or enjoy French bistro food. Located in the Triangle d’Or district, it’s not the easiest place to find, but well worth seeking out. Aside from the extensive wine offerings, they also boast an excellent cocktail mixologist.

If all you want is a beer and the comfort of a pub, then Bar du Titan, near the Marché Central, should be at the top of your list. It has a relaxed and lively atmosphere, with friendly bar staff who are happy to look after you. With its baize green walls and wooden chairs, it’s a good place to decompress after seeing the sights of the city and just chill while watching a game on TV.

Another low-key bar is Bar Longchamps on Rue d’Ifrane in the CIL quarter. This place is a bit of an institution in Casablanca. It’s a classic example of what’s called a “brown” bar; it’s a little dog-eared and grubby, but that’s its charm. It serves crisp cold beers and reasonable bistro-style dinners, and you can while away a long afternoon on its covered patio.

If you’ve ever wondered how it feels to fall down a neon-coloured rabbit hole designed by Dario Argento, then visit the Nixx on Boulevard Mohamed Abdou. But first, you need to visit the restaurant next door that will give you the entrance code to. Needless to say, getting to the bar is a bit of an adventure for the uninitiated. The Nixx is Casablanca’s first speakeasy bar, and despite the complexity of getting in, it’s a friendly place with an excellent cocktail menu, including non-alcoholic beverages that don’t just taste like fruit juice.