Most Impressive Buildings in Marrakesh 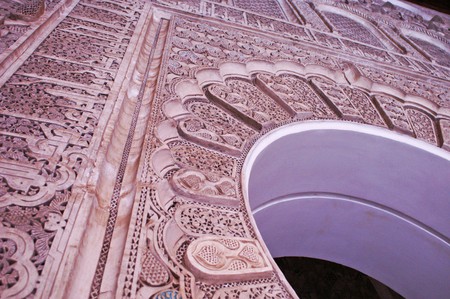 Morocco is home to a host of visually striking buildings. For those planning a getaway to the country’s former imperial capital of Marrakesh, it would be a wise move to add the architectural gems outlined in this guide, to your itinerary.

Mosque
Facebook
Email
Twitter
Pinterest
Copy link
Share
Map View
The towering minaret of Koutoubia Mosque is the symbol of Marrakesh. Constructed from red bricks and sandstone, the outside of the mosque features many ornamental details. Turquoise tiling, plasterwork, calligraphy, arches, and fountains are a few of the mosque’s attractive features.
Open In Google Maps
Médina Marrakech, Marrakech-Safi, 40000, Morocco
+212524433407
Visit Website
Give us feedback
Book Now 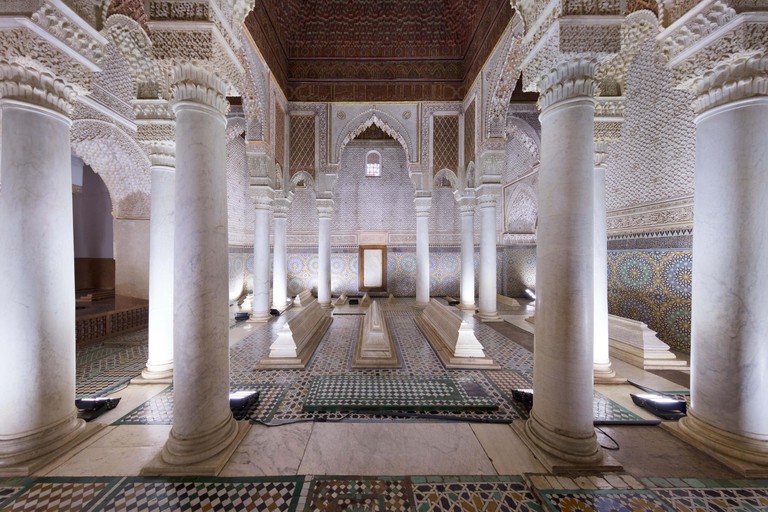 © Nick Bailey / Alamy Stock Photo
Book Now
The Saadian Tombs is a large complex of lavish mausoleums and tombs. Containing the remains of royalty and those held in high regard by the sultan, the site dates back to the 1550s. Gold, Italian marble, and colourful tiling add opulence to the final resting places.
Open In Google Maps
Rue de La Kasbah, Mechouar-Kasbah Marrakesh, Marrakesh-Safi, 40000, Morocco
+212524433407
Visit Website
Give us feedback

Although now in ruins, it is still easy to imagine how impressive the former palace would have been in the past. Built to be one of the finest palaces of its time, the now-bare walls of Badi Palace were once adorned with decadent ornamentation. 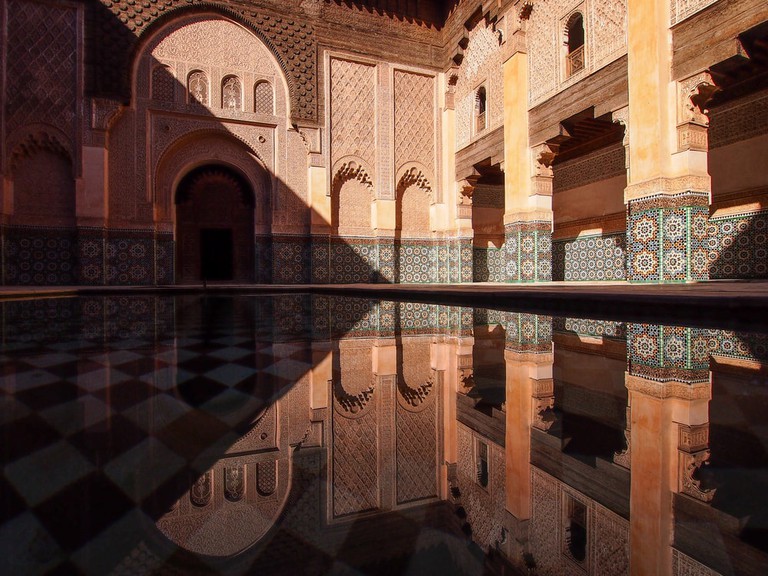 Ali Ben Youssef Medersa Islamic school, Marrakesh, Morrocco | © Nicram Sabod/Shutterstock
Book Now
Ben Youssef Madrasa was one of the most splendid Islamic schools across the Maghreb. Admire the exterior details from the pretty courtyard before peering out of the small windows in the comparatively austere former studying rooms.
Open In Google Maps
Rue Assouel, Marrakech, Morocco
Give us feedback

The interesting Marrakech Museum is housed within a former palace. The 19th-century Dar Menebhi Palace has been restored to its former glory, displaying fine Andalusian-style designs. The main courtyard has lovely ornamental fountains and a huge chandelier hangs in the central area. Beautiful craftsmanship can be seen throughout the building.

Another Marrakshi museum in a former palace, Dar Si Said has also been carefully renovated. It displays many fine examples of traditional Moroccan artisanship, including tilework, woodwork, and plasterwork.

Mosque
Facebook
Email
Twitter
Pinterest
Copy link
Share
Map View
The Kasbah Mosque, also known as Moulay El Yazid Mosque, is one of the city’s oldest mosques. The reddish-coloured minaret with its band of greenish-blue tiles is somewhat similar to that of the Koutoubia Mosque. The tower is also topped with a spire and orbs.
Open In Google Maps
23 Rue de La Kasbah, Mechouar-Kasbah Marrakesh, Marrakesh-Safi, 40000, Morocco
Give us feedback

The Roman-inspired Theatre Royal is a photogenic building in Gueliz. A relatively new addition to the city, construction of the theatre was completed in 2001. Topped with a large cupola, the front of the building features splendid columns.

Attractive both inside and out, the current Marrakesh Railway Station was built in the late 2000s. It combines traditional Moroccan and Islamic styles with modern designs. The main atrium is light and airy, and there are interesting sculptures outside the main entrance.

A post shared by Patrick Benjaminsson (@patrickbenjaminsson) on Oct 14, 2015 at 9:45am PDT

Sleek and stylish, Menara Airport perfectly blends the old with the new, with traditional designs fused with contemporary features. Symmetrical patterns, lots of glass, and gleaming white metal create a feeling of order and efficiency.

LA MAMOUNIA AS AN ARTIST’S MUSE ? ✈️ ? This multi-faceted place, its architecture, Arabic-Andalusian decoration, and fantastic views over the gardens, the Koutoubia, the Atlas Mountains and the park have all been sources of inspiration and creativity. La Mamounia and its spirit have inspired artists and writers, and enriched the experiences of those who stay here, and take the time to explore and understand it. This Moroccan palace has never been more alive. #LaMamouniaLife is the Best Life Ever… ‪#LaMamouniaMarrakech is the place to be… #LaMamouniaStyle is the iconic style…. #interiordesign #architecture #art #artist #artistsofinstagram #travel #luxury #lamamouniamarrakech #travel #Lovemyjob #Staytuned #travelstyle #Luxe #luxurylife #mamounia #mamounia_hotel #Maroc #Morocco #marrakech #sun #nicewheather #leadinghotels #jardins #gardens #takemeback #bestvacationever ⛤ ? www.mamounia.com ? 00212 524 388 600

The five-star Hotel Royal Mansour is another of Marrakesh’s most attractive luxury accommodations. Lavish furnishings perfectly accentuate and complement the striking designs. Architecturally and ornamentally, the hotel blends traditional Moroccan elements with Andalusian and Moorish styles. The large and impressive entrance gateway sets the tone for the beauty concealed behind the outer walls.