If there’s a drink around the world that can create a hearty debate, it’s tea. Some cultures add milk, others add fruit. In some places, sugar is vital to a delicious-tasting tea. Morocco is known for mint tea and it is so common, it could almost be considered part of the national psyche. Enjoyed daily by most of the local population and a must-try for visitors, learn how to make an authentic Moroccan mint tea like a pro.

History of Mint Tea in Morocco

The exact origins of the drink in Morocco are unknown, with various tales told about how tea first came to the country. Some people believe that Phoenicians brought tea to the area in the 12th century BC. Others say that early nomadic Berbers brought tea to Morocco from Asia, and there are those who believe that Arab settlers introduced tea to the lands. Another version is that Spanish and Portuguese invaders introduced tea to Morocco in the 1900s.

Other accounts say that the English Queen Victoria gave tea as a gift to Morocco in the 17th century, while there are other stories about pirates looting tea from cargo ships and of an innovative British merchant offloading tea in the Mediterranean region due to being unable to continue to his original destination because of the Crimean War.

Whichever version you believe, it’s obvious that tea now occupies a fundamental role in the drinking habits of locals. Indeed, Morocco is one of the world’s largest tea importers. No tea is actually grown in Morocco – most of it comes from China. 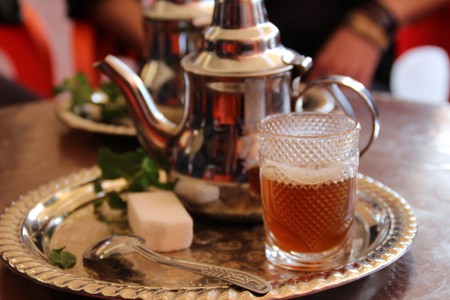 While there are no hard and fast traditions attached to the preparation and drinking of mint tea in Morocco, some families believe men are better at making a good pot of tea. Males are said to be more patient and more inclined to spend up to 30 minutes brewing the perfect pot.

Drinking tea is often a huge part of any social gathering in Morocco, with the drink symbolising friendship and hospitality, as well as showing a warm welcome. Tea is generally made in front of guests. At public gatherings however, a patron may be given a small silver tray with a pot of boiling water and all the necessary ingredients to make their own.

A great deal of ceremony may be attached to sitting down for a glass of mint tea in some restaurants and cafés. Rituals may include burning incense, dimmed lighting, and playing traditional Moroccan music.

Locals enjoy mint tea at any time of the day, but especially before and after meals. 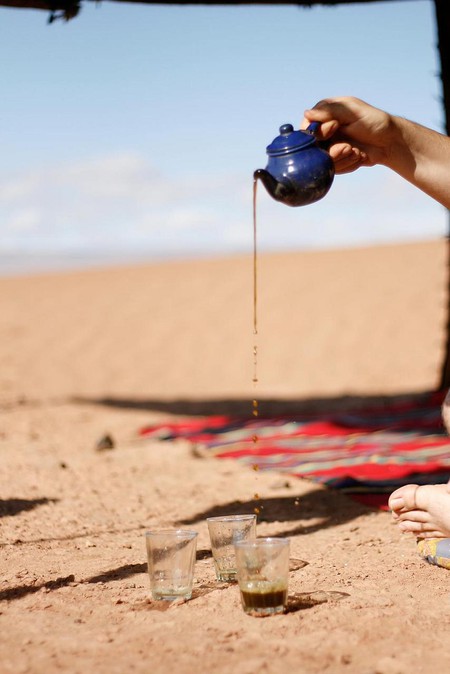 What to Eat with Mint Tea

There are no particularly special foods that a Moroccan would eat with mint tea; the drink may be served with any meal. B’sara – fava bean and garlic soup – would be almost naked without a glass of mint tea alongside it. In cafés, it’s not uncommon to order a selection of Moroccan pastries to nibble on while relaxing with a pot of tea and chatting with friends. From the typical Moroccan meals of tagine and couscous, to regional specialities like tangia and seafood dishes, there’s never a meal that doesn’t go with mint tea. 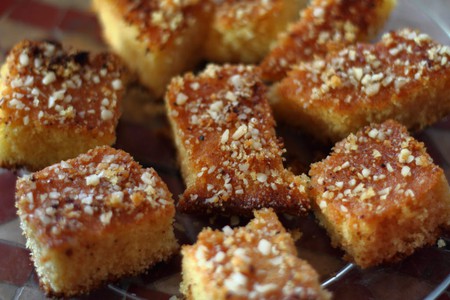 How to Make the Perfect Mint Tea

There are just a few basic ingredients for mint tea: dried green tea, fresh sprigs of mint, large lumps of sugar, and boiling water. Different establishments and families may have slightly different methods of making the final product. The amounts of ingredients can vary, as can the brewing time.

The first glass of water is returned to the teapot. The pot is then filled with boiling water and the teapot is put on the stove or fire for approximately five minutes. A handful of mint and sugar lumps are added to the tea when it’s removed from the heat.

It is then poured into a glass from a height, adding plenty of air to the drink so that the top gets rather frothy. This is then returned to the pot, with the process repeated several times to thoroughly mix the sugar and minty flavour. People might taste the tea between pouring to gauge how many more times it should be mixed.

If some people don’t want mint in their tea, the mint might be left out of the pot, instead put into individual glasses. Depending on personal preferences, other ingredients, such as orange flowers, thyme, and rosemary, might be added to the pot. 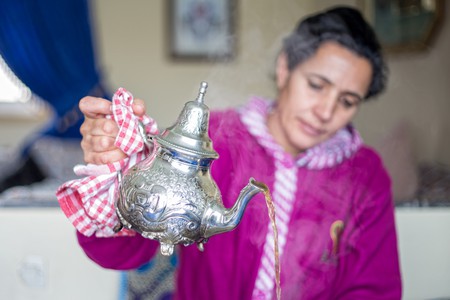 Where to Enjoy Mint Tea in Marrakesh

It is served in almost every food and drink establishment throughout Morocco. The Four Seasons hotel provides an elegant tea-drinking experience in Marrakesh. The many terraces overlooking the lively Djemaa el-Fna are also popular places for visitors to indulge in a sweet minty drink while watching the sights below.

Gastro MK offers an afternoon of cultural fusion, with a British afternoon tea experience that features Moroccan mint tea accompanied by dainty sandwiches and sweets. Enjoy nature and a breath of fresh air in Le Jardin, support local women as you sip tea in the Amal Center, and indulge in a hospitable glass of tea in a carpet shop.

Many Moroccans would typically favour tea made at home, prepared to their exact taste, over a café or restaurant. That said, locals will often have a few favourite haunts, generally small nondescript establishments found down a maze of back alleyways. 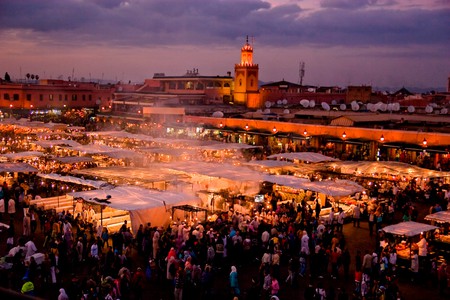 Overlooking Djemaa el-Fna, Marrakesh, in the evening | © Ismael Alonso / Flickr
Give us feedback