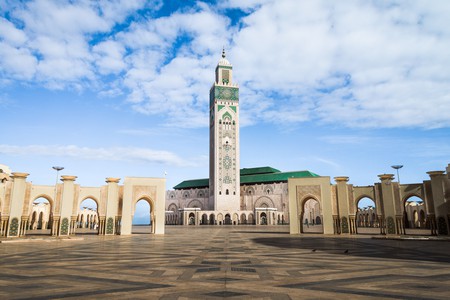 From opulent palaces, grand gates, and splendid universities to mosques, religious schools, hammams, shrines, and tombs, there are many stunning buildings to admire around Morocco. The imperial cities of Marrakesh, Rabat, Fez and Meknes, in particular, have a number of beautiful legacies left by former rulers, though there are plenty of other striking buildings elsewhere around the country too.

Built to celebrate the previous king’s 60th birthday, Hassan II Mosque in Casablanca is big, bold, and, to some, rather ostentatious. Sitting next to the water, part of the mosque actually overhangs the ocean. One of the largest mosques in the world, the mighty prayer hall can hold 25,000 worshippers. Unlike many of Morocco’s religious sites, members of the public can observe the lavish interiors as part of a tour.

The soaring minaret reaches 210m (690 ft.) into the sky. Both inside and out, the mosque shows the finest Moroccan designs. Master artisans carved wood and stone by hand and great care was taken to complete the bright tilework. Gilded edges, cedar wood, brass, pink granite, sweeping archways, huge chandeliers, and marble features complete the effects of grandeur.

Dating back to late 12th century and standing on almost the same spot as an older mosque, Koutoubia Mosque is one of the main symbols of Marrakesh. Although non-Muslim visitors are not allowed inside the grand mosque, the main point of interest lies outside: the soaring minaret. Built from red sandstone, the minaret is one of the best examples of architecture from the Almohad period. It has also influenced other designs around the country and beyond. Indeed, it could be said to be the blueprint for Moorish-style architecture in Morocco.

The tower features intricate carvings in the stonework and arches, with scalloped edges. There is also a wide edging of ceramic tiles near the top and jagged crenellations on top of the walls. Look closely and you’ll notice that opposite sides of the tower have alternate patterns. There are four copper orbs on top of the tower. While this is a common feature in Moroccan architecture, it is normal for there to be just three spheres. 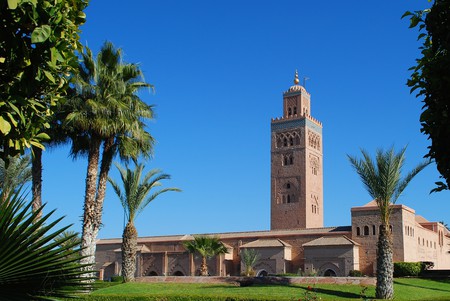 With a name that means ‘brilliance’, it’s no surprise that Marrakech’s dazzling El Bahia Palace is among the most exquisite buildings in Morocco. Constructed over a period of 14 years, expert artisans were brought from all over the country to work on the palace. Built in the late 1800s, the palace showcases the Alaouite designs that were popular at that time.

An expansive marble courtyard and large ornamental gardens highlight the huge palace’s external designs. Inside, floor-to-ceiling ornamentation and luxurious decorations reign. There are plenty of delicate Islamic-style arches throughout the palace, as well as colourful tiling, fountains, carved wooden details, painted ceilings, and marblework. Enter the harem and be dazzled by stained glass and dainty silk panels. 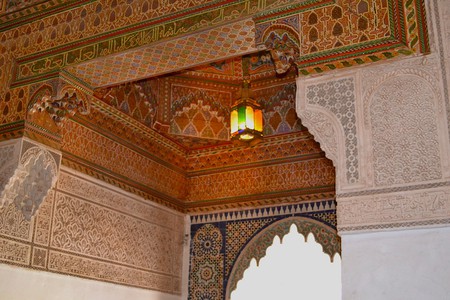 The oldest university in the world, the University of Al Quaraouiyine in Fez can trace its history back to the year 859. Originally built in a fairly simple style, it has seen many changes, enlargements, and embellishments over the years. Andalusian designs are prominent, as Spanish-Islamic styles became popular in Morocco, with the arrival of Muslims from Andalusia. Geometrical floral patterns, ancient kufic calligraphy, ornate plasterwork, gleaming marble, and ornate domes were all among the early designs.

Much work was carried out during the Marinid dynasty. Indeed, this was the mosque’s golden age. Elegant arches, towering columns, and a huge chandelier were added. The original minaret was protected by plaster and bright white paint. Pavilions were erected in the courtyards during the Saadi dynasty, and much restoration work was undertaken by the Alaouites. Today, the mosque and university showcase not only splendid Moroccan designs, but a blend of styles that were en vogue during different times in the country’s past. 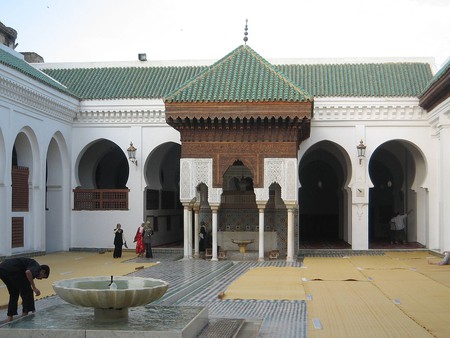 Located in the Moroccan capital of Rabat, the Mohammed V Mausoleum contains the remains of two former Moroccan kings. Built for Mohammed V, two of his sons, the former King Hassan II and his brother Prince Abdallah, were also later laid to rest here. Both a tomb and a mosque, the attractive white-marble mausoleum is topped with a green pyramid-shaped roof. Armed guards stand to attention outside. A large golden regal item, the pillars of an unfinished mosque, and the tall Hassan Tower add to the exterior splendour.

Non-Muslim visitors are allowed inside. Colourful tiles, marble pillars, granite floors, decorative fountains, and intricate carvings on doors and the ceiling contribute to what is often said to be one of the most stunning examples of modern Moroccan architecture from the Alaouite era. Look down upon the tombs, bathed in the light of large chandeliers, from the viewing platform and you’ll appreciate that it is, indeed, a fitting tribute for a king. 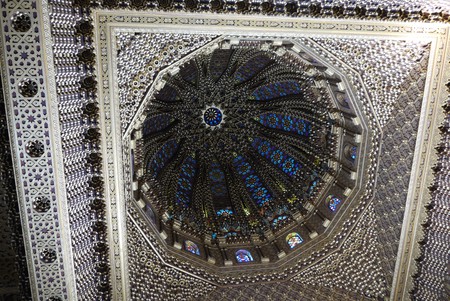 Moulay Ismail was the second Aloauite king. He moved the capital from Marrakesh to Meknes, constructing many beautiful buildings with parts taken from Marrakshi structures built in the Saadian era. A fan of all things grand and attractive, the king commissioned the construction of his own tomb. It was built using slaves and prisoners, with skilled craftsmen adding the finishing touches.

The lavish rooms feature detailed tiling and plasterwork, along with expensive and luxurious objects. Rooms surround sweeping courtyards, complete with tinkling fountains. The complex also contains a mosque. Though non-Muslim visitors are not allowed to go close to the actual tombs, they are allowed to visit the inside of the elegant building. 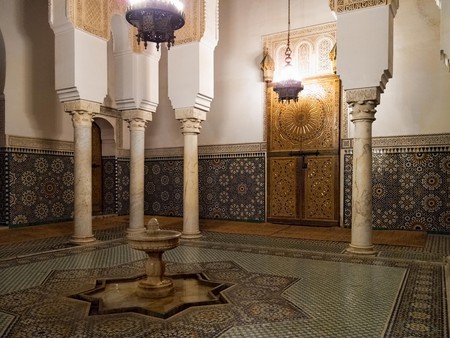 Inside the Mausoleum of Moulay Ismail in Meknes | © Dan Lundberg / Flickr

The small town of Moulay Idriss Zerhoun, often known simply as Moulay Idriss, is a deeply revered and significant place for Moroccans. Moulay Idriss, often said to be the first Arab in Morocco and the founder of the Idrisid dynasty, first lived in this area. The town has a rich mausoleum, which is off-limits to non-Muslim visitors. Of particular architectural interest, however, is the local mosque. While visitors are not allowed inside, they can admire the only round minaret in all of Morocco. Covered in bright green tiles and text from the Holy Quran, the minaret was added to an older mosque in 1939. 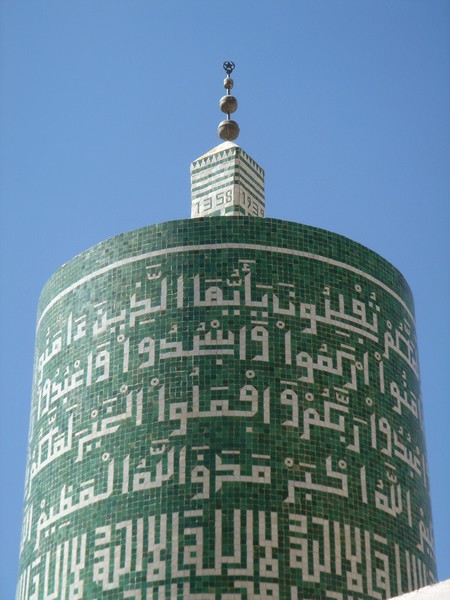 The only round minaret in Morocco, Moulay Idriss | © MsAnthea / Flickr

Chefchaouen attracts many visitors because of its beautiful blue buildings in the heart of the old town. The Grand Mosque is also of interest though. Built in the 15th century, its tower is different to the commonly found square designs; it is octagonal. Eight-sided minarets can be found in a few places in northern Morocco, due to the influence of Andalusian Muslims who came to the country from Spain. The minaret at the Grand Mosque in Chefchaouen stands proudly above the surrounding earth-coloured roof tiles, its relative simplicity highlighting its unusual shape. 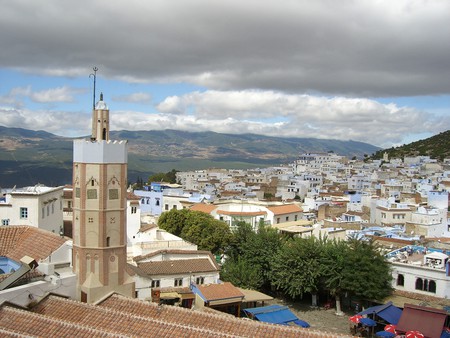 The former residence of a powerful clansman, El Glaoui Palace and Taourirt Kasbah look fairly normal from the outside. The reddish walls and small windows are quite standard for Moroccan Kasbahs. On entering, however, visitors find themselves in a maze of rooms and passageways of all shapes and sizes, some adorned with mosaics, tilework, paintings, and ornamental stucco. Though parts of the complex are in ruins today, restored areas provide a peek into the lives of a wealthy family from past times.

Discover reception rooms, the harem, and kitchens, most today with bare white-washed walls and carved wooden ceilings. The upper levels, though, contain rooms that have been carefully restored to their former glory. 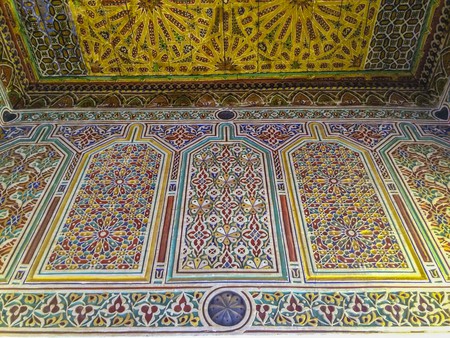 If taken individually, most of the buildings within Ait Benhaddou would fail to make much of an impression. What does impress, however, is the overall layout, size, and design of this traditional Berber kasbah in the mountains. The UNESCO-listed mud-brick fortifications are among Morocco’s most popular tourist attractions. The site is also one of the best examples of the country’s southern desert architecture.

Small windows punctuate the defensive outer walls, with towers rising from the site. Unlike Moroccan buildings that use Islamic designs and details, Ait Benhaddou is marvellously devoid of noticeable symmetry. The seemingly haphazard layout of the exterior of the site is a big part of its visual appeal.

Inside the walls, some of the lower homes feature well-preserved decorative details carved into the wood and clay. 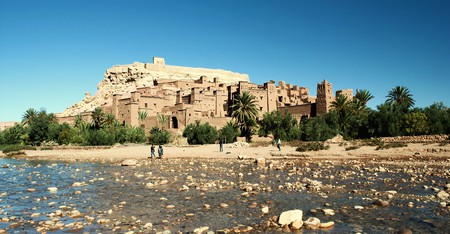 The ancient beauty of the Saadian Tombs and the modern splendour of the opulent Royal Mansour Spa in Marrakesh, the stunning gates of Meknes’ medina and Royal Palace, Rabat’s Dar al-Makhzen (Royal Palace), and Ifrane’s Swiss-inspired chalets are further examples of impressive architecture in Morocco.