How To Spend 48 Hours in Casablanca 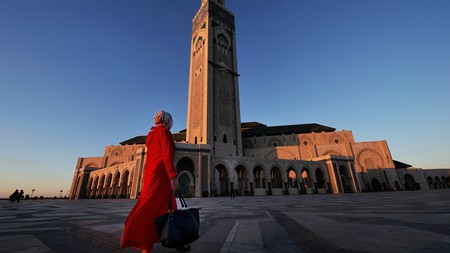 Casablanca has the buzzing energy of a rapidly developing city whose citizens know how to enjoy their leisure time, from luxury fashion shopping to skyrise bars, as well as enough old world beauty to make a great city break or to book-end any tour of Morocco.

They say that if Morocco’s capital Rabat is like DC, then Casablanca is New York. Also known simply as ‘Casa’, the city is a mixed bag of beautiful palaces, French colonial and Art Deco architecture, all sitting alongside industrial estates. It’s easy to navigate the city thanks to good public transportation and taxis that run set routes. And with helpful locals, it’s hard to get lost in Casa. 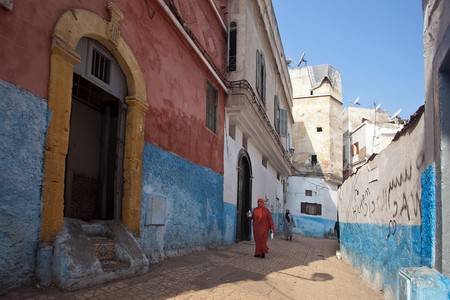 Casablanca is less than a tourist trap than Marrakech. In fact, if you ask local residents about the old medina, you’ll probably be asked why you would want to go there. But if you’re able to get up early, visiting the old city section is a great way to start your day. This is a working market where you’re most likely to find everything from knock-off handbags and faux designer brands to carpets, spices and delicious foods. 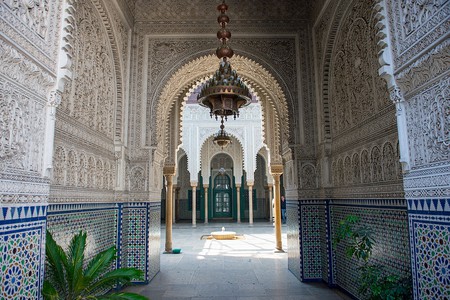 From the dirt and dust of the souk head to Mahkama du Pacha, sitting by the grandiose Mohammed V Square and near the Quartier Habous. The beautiful city courthouse is an example of the late Moorish style architecture. Built around 1942, it is full of fascinating architectural details and furnishings. 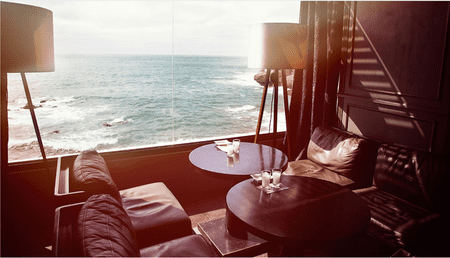 After all this walking you will probably be longing for food, and the Corniche is where Casablanca opens onto the sea under the towering Hassan II Mosque. The selection of seafood on this promenade is amazing as fresh and delicious food is cooked with French influences. For fine dining visit A Ma Bretagne – an upscale restaurant that is considered one of the best restaurants in Morocco. However, if you prefer a more hip laidback vibe then Le Cabestan has an extensive food menu and serves excellent cocktails both at lunchtime and in the evening. This Mediterranean restaurant opened its doors to the public in 1927 and serves dishes like smoked fish, risotto and duck in an elegant venue overlooking the Atlantic Ocean. 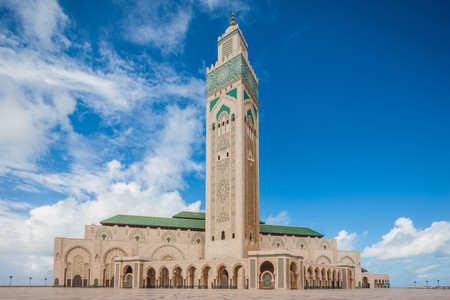 Catch one of the afternoon tours at 3pm and 4pm around Hassan II Mosque to see more of this iconic landmark. Completed in 1993 after seven years of construction, it took 6,000 artisans to create the striking details that decorate the inside of the building, including the hand-crafted marble. Today the mosque, which is one of the largest in the world, can house 105,000 worshippers both inside and outside. Your guide will share information about the history of Islamic Morocco as well as the rather controversial history of the mosque’s construction. 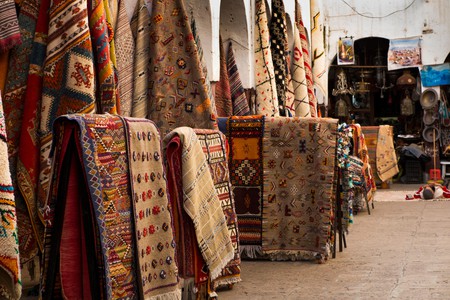 Afterwards, wander the length of the Corniche to see the El Hank lighthouse. This pedestrian-friendly street is home to a range of restaurants and clubs, and you can even spot the Hassan II Mosque from here. Once you’ve arrived at the El Hank lighthouse, climb the 256 steps for unparalleled views of Casablanca. Built in 1919, it stands at 161ft (49m) with a light that can be seen 30 nautical miles (56km) away.

From here you can get a taxi or walk back to Quartier Habous. Built by the French in the 1930s, the well-maintained neighbourhood is a neat version of old Moroccan souks with clean streets and a relaxed atmosphere. It’s also a great place to pick up souvenirs or take selfies in front of the Royal Palace – one of the many residences of King Mohammed VI who has been ruling the country since 1999. 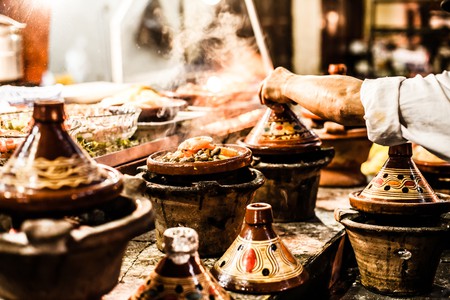 As the sun sets and the call to prayer fills the air, this is the perfect time to enjoy a cup of tea and relax in a street café. Tea is a big part of Moroccan culture and as most locals don’t drink alcohol, they often spend time at a local café sipping on the hot beverage.

And when night falls, the market becomes more animated with illuminated stalls and the street food vendors set up shop. This is the perfect food adventure for the hungry foodie. Indulge in sandwiches of spicy brochettes, chermoula-crusted fried sardines, aubergine fritters, and soups that are paired with freshly baked bread.

Bread is fundamental in Moroccan cuisine. Try msemmen, a tasty and flaky flatbread that you can eat on its own or as a wrap, or baghrir, a giant flat crumpet that’s excellent with butter and honey. If you have a sweet tooth, stock up on dates and figs and Moroccan tea before heading home. 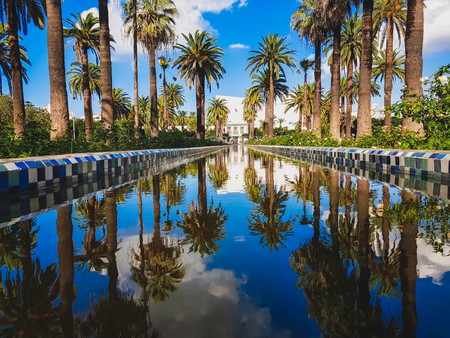 On your second day, explore a different side of Casablanca by visiting the Moroccan Jewish Museum where you will learn about the history of Jewish people in Morocco and how they have coexisted with the Arab people throughout history.

Casablanca’s booming art scene has evolved in the past few years with a large number of contemporary art galleries opening. Start your art tour of Casablanca in the green and lush grounds of the Parc de la Ligue Arabe at Villa des Arts, a contemporary art museum situated inside a big Art Deco villa. From there, head to some of the small up and coming contemporary galleries such as Mine D’art or La Galerie 38 which both feature emerging new talent from North Africa. 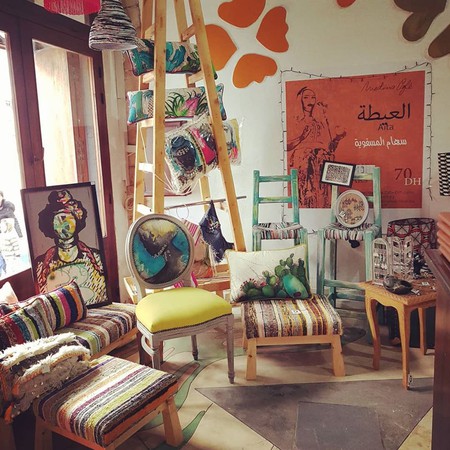 At lunchtime seek out a good Moroccan restaurant and try authentic tajine – a dish named after its conical ceramic cooking pot – and is delicately flavoured with soft spices like cumin and cinnamon. If you can, go for the fish tajine, which is a local speciality that is eaten with bread.

Morocco is famed for its artisanal products from hand-woven carpets to ceramics. Young designers are now taking the traditions and creating a whole new wave of contemporary designs in fashion and interiors. You can find items in boutiques like Morettina, which also holds small arts events. It’s worth planning your trip in late September to catch Casablanca’s Design Week

If you’re a die-hard shopaholic, Morocco Mall is a haven with brands and boutiques. Look for natural beauty products with locally produced argan oil or barbary fig – they’re some of the best things that you can buy in Morocco. 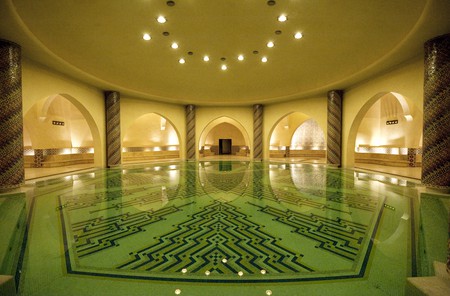 After a long day admiring art and shopping, end it with a must-do activity: have a traditional hammam and massage. There are many high-quality spas in Casablanca offering a whole array of treatments, but the classic hammam bath and Moroccan massage is a truly transformative experience. To round off your trip, enjoy a cocktail and tapas at Casa’s famous sky bar, Sky 28, and enjoy panoramic views of the city.

This article is an updated version of a story created by Sarah Williams.