How to Spend 24 Hours in Meknes 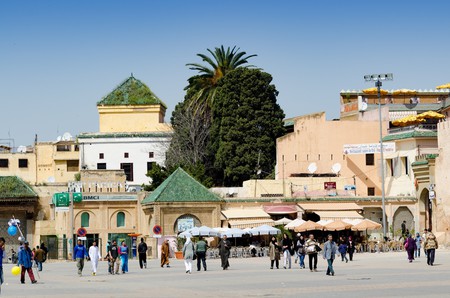 A bright and sunny day in Meknes | © xiquinhosilva / Flickr

One of Morocco’s old imperial cities, Meknes is something of an under-visited gem. While there are many things to enjoy in the city, you can get a good overview of Meknes in a relatively short period of time. If time is limited, here’s the best way to spend a day in Meknes.

Get an early start to make the most of your time in Meknes. Eat a delicious breakfast at your hotel, if you’ve spent the previous evening in Meknes, or pick up an array of French and Moroccan pastries from a local bakery for a quick and tasty start to the morning.

Walk through the striking Bab el Khemis, a grand gateway into the medina. Pause to take photos of the ornamental gate before walking along the straight road next to cemetery for about ten minutes to reach another interesting piece of architecture: Borj Belkari Tower.

It’s worth taking 15 minutes or so to admire the pottery collection in the tower, if the museum is open, after seeing the outside of the low, rectangular tower. Bab el Kari Mosque is close as well, if you want to take a few pictures of the exterior. 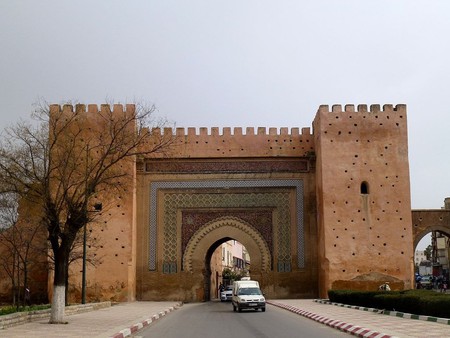 Next, jump in a taxi to take you to Heri es-Souani: enormous former granaries and stables. The ride will take around five minutes. Alternatively, if you’re bursting with energy, you can walk to the site in about 20 minutes. Huge archways are set in towering walls, and the atmospheric ruins are incredibly impressive. Hankering back to the city’s time of power, imagine how busy the royal storage and stabling facility must have been in its heyday. Wander around the ruins before admiring the reflections in the nearby Agdal Basin.

One of the city’s main mosques, the Hassan II Mosque, is located close to the ruined palace. Although non-Muslims are not allowed inside, it’s an impressive sight to behold from the outside. 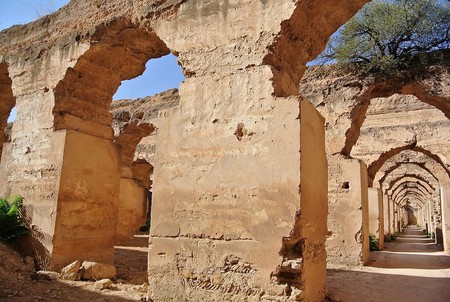 When you’ve finished exploring Heri es-Souani, take a taxi to Habs Qara, or Habs Kara, a former jail. The two-kilometre (1.2-mile) drive should take around five minutes. The old prison was where the powerful sultan Moulay Ismail detained political prisoners and slaves. Unlike many other jails, however, this one was located entirely underground. Fairly gloomy and eerie today, stroll through the gigantic and almost dungeon-like subterranean jail and see where as many as 60,000 captives were held. 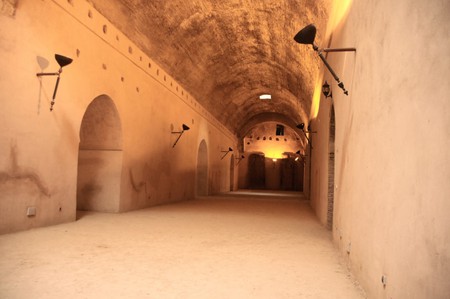 After re-emerging from the dimly lit passageways and chambers, take a leisurely short stroll to the grand Mausoleum of Moulay Ismail, passing through the gate of Bab Moulay Ismail on the way.

The historic Mausoleum of Moulay Ismail is one of the finest buildings in Meknes and houses the remains of the famous former sultan. As it is a significant site, tourists are allowed inside the opulent place of rest, although do note that non-Muslims cannot approach the actual tomb. The building’s glory, complete with many fine architectural details and decorative features, is sure to impress. 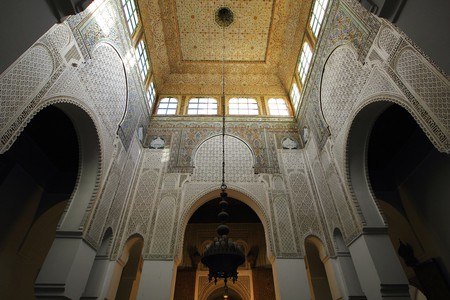 From the mausoleum, walk a few minutes to the glorious Bab Mansour, one of the most splendid, monumental gateways in the world, and one of Meknes’s gleaming jewels. Complete with zellige tiles, intricate plaster work, marble pillars, wooden carvings, and a 16-metre-tall (52-foot) door, the gate dates back to the early 18th century.

After marvelling at the beautiful gate, continue through El Hedim Square to the nearby Dar Jamai. Don’t be tempted to linger in the square; you’ll be returning here later on in the day. 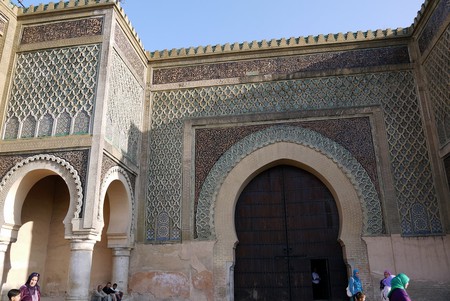 Time for lunch! After all the morning’s explorations you’re sure to have worked up an appetite. There are several restaurants close to Dar Jamai; have a look at the menus and choose whichever appeals to you the most. Most sell a similar assortment of fare, including tagines, pizzas, salads, and meat brochettes. Rest your feet for a while and enjoy traditional Moroccan cuisine. Restaurants in the locale include Ya Hala, Riad d’Or Restaurant, Snack Mustafa, and Bab Mansour Restaurant. 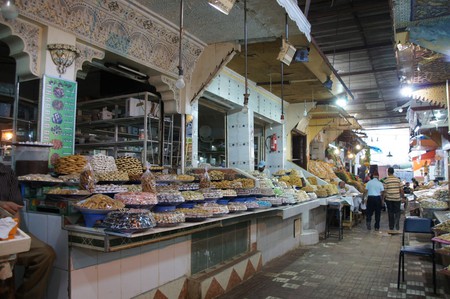 After lunch, wander to the Grand Mosque, also known as the Medina Mosque. It is just 200 metres (0.13 miles) from Dar Jamai. As with many of the nation’s holy places, non-Muslim visitors are not allowed inside the building. You can, however, feast your eyes upon the attractive building from the outside. Built in the 12th century, the square minaret stands high above the surrounding buildings.

Cross the street to look inside the beautiful Bou Inania Madrasa. This former religious school was established in the 1340s and showcases brilliant examples of designs from the Marinid period. See where devout scholars sat in seclusion to fervently study the Quran and further their knowledge and understanding of Islam. Inscriptions from the holy text adorn the walls, with the exquisite calligraphy adding to the overall splendour. 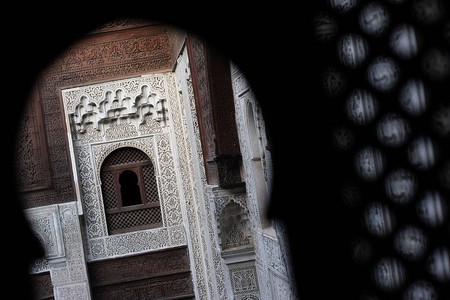 You’ll probably be glad to give your feet a break and relax for a while; it’s been a busy day! A leisurely way to see Meknes from a different perspective is with a ride on a calleche. The horse-drawn carriages in Meknes are especially enchanting with a fairytale-like appearance. Wander back to Place El Hedim and negotiate a price with a calleche driver for an hour’s tour of the medina. You’ll see even more impressive gates, walls, and religious buildings, as well as homes, market stands, and much more. 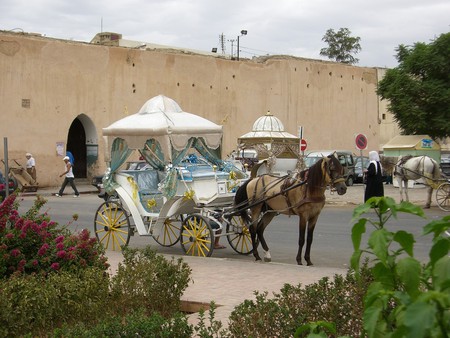 After your calleche ride you’ll hopefully feel suitably refreshed and rejuvenated. Upon returning to Place El Hedim, you’ll likely notice that the area is starting to get a little busier, with more people and street vendors. Explore the narrow streets and souks next to the square and hunt for souvenirs and gifts. Although the souks of Meknes definitely aren’t as large or lively as those in nearby Fez or Marrakesh, visitors can still find plenty of traditional wares. One particular craft to look for is damasquinerie. Only artisans in Meknes now still practice the tradition of hammering silver onto a metal surface to make ornamental products. 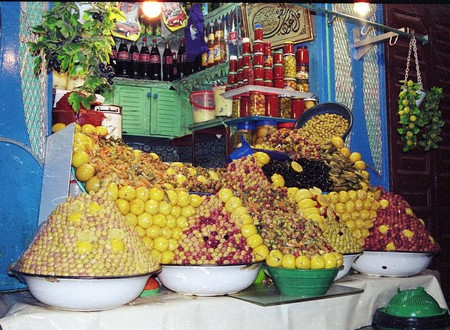 When you’ve finished shopping in the souks, return to El Hedim Square for a taste of local life. Although certainly not as frenetic as the more famous Djemaa el Fna in Marrakesh, an evening in El Hedim Square is still lots of fun. Music blares from speakers, with different songs and styles competing to be heard over the din. There may even be live musicians entertaining the crowds. Juice-sellers and snack stalls sit on the edges of the square, while in the middle you can watch as people try their hand at a variety of games.

Sample lots of tasty street food when you start to feel peckish, or head into one of the surrounding restaurants for a more substantial evening meal. 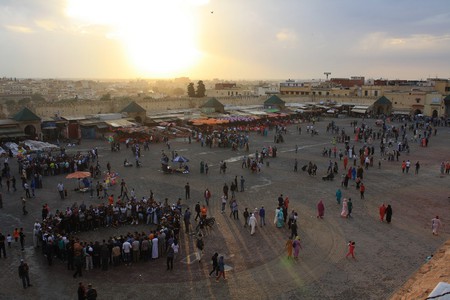 Your day doesn’t need to end just yet, as Meknes has a good selection of bars to keep the fun going for longer. Some of the best for foreign visitors include Le Pub, Hotel Zaki, and Hotel Rif.

When your eyelids start to feel heavy and you just can’t keep sleep away any longer, spend the night in one of the city’s traditional riads for an authentic stay.

Your day in Meknes will be very busy, but you will have covered many highlights and had diverse experiences in a short period of time. With an extra day in the city you could also explore the nearby Berber and Roman ruins of Volubilis, or the ancient city of Moulay Ismail.