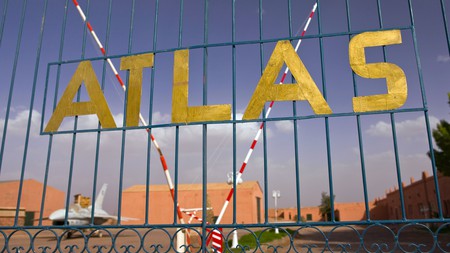 Atlas Film Studios is the biggest film studio in the world. Named after the vast mountain range that surrounds it, this 31,000-square-metre movie lot has played host to a surprising number of Hollywood hits. 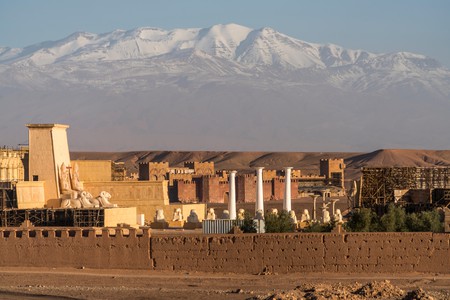 Also known as Cinema Studio Atlas or Atlas Corporation Studios, Atlas Film Studios was officially ‘built’ in 1983 by Mohamed Belghmi, a Moroccan entrepreneur who recognised the need for a permanent film facility in the region.

And at 31,000 square metres (322,000sq ft), it holds the accolade of being the world’s biggest film set in terms of land mass. It’s so big that there is some confusion as to where the sets end and the unclaimed desert begins.

How did Atlas Film Studios get so big?

The reason for this is quite simple, but also unique to Atlas. When one film finishes production, the sets are usually left behind and a new one is built close by for the next shoot. The result is a studio that grows bigger each year. Typically, Hollywood studios tend to reuse sound stages over and over again, with film crews tasked with dismantling their sets once they are finished.

This also explains the appeal of Atlas Film Studios for those with a sense of nostalgia for the film and TV industry. You rarely get a chance to see locations in situ, but that’s exactly what you get here.

One of the first things you will find when entering the official grounds of the studio is an F-16 prop jet plane left behind from the production of the Michael Douglas romantic comedy Jewel of the Nile (1985). 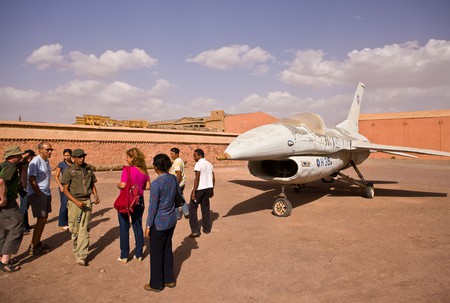 You can sit in echoing amphitheatres where fire-breathing dragons once roared and retrace the tyre tracks of Jeremy Clarkson and chums who raced around in high-powered sports cars for an episode of The Grand Tour.

It’s actually hard to think of a modern American desert-based movie that hasn’t ended up being shot at Atlas Film Studios. Gladiator (2000), Kingdom of Heaven (2005) and The Mummy (1999) have all shot sequences in the Moroccan desert. Most recently, Guy Ritchie brought his Disney live-action remake of Aladdin (2019) here. 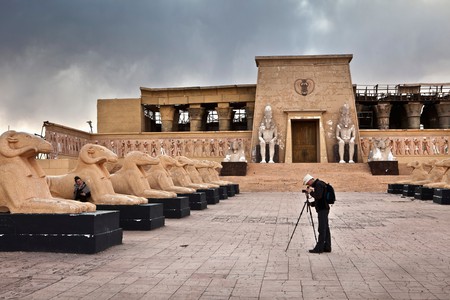 And it’s not just Hollywood movies that have found the isolation and sheer size of Atlas Film Studios perfect for their needs. Game of Thrones turned a portion of the area into a part of Slaver’s Bay, which saw a trio of dragons and their queen ‘liberate’ the people of Meereen. The coastal town of Essaouira was also used in the production of the series.

People still live in areas of the desert in Ouarzazate, including in the earthen collection of stacked dwellings in the nearby ksar (fortified village) of Ait-Ben-Haddou. Martin Scorsese shot Kundun (1997) close by, with the former Saharan trade route being transformed into a remote Tibetan location for the movie.

While the Moroccan desert has featured in a number of films in recent years, nearby locations have been used for major productions since the early 1960s. When David Lean shot Lawrence of Arabia (1962) in the desert, it is said that he discovered several ruins along an ancient caravan route while scouting locations.

How to visit Atlas Film Studios

Many visitors mistakenly think that the site has been abandoned, but in reality it’s easily accessible via guided tours that can be booked online.

The studio is fully open to the public as long as there is no filming taking place. It can take a while to walk around, so give yourself a day to fully take it all in and explore ‘Hollywood in the Desert’. 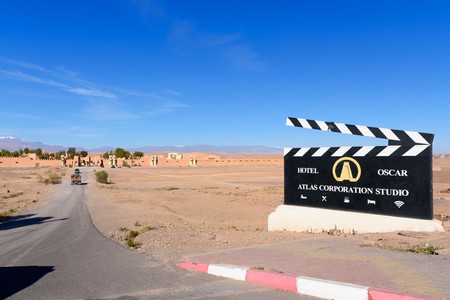