The History of Koutoubia Mosque, Marrakech, in One Minute 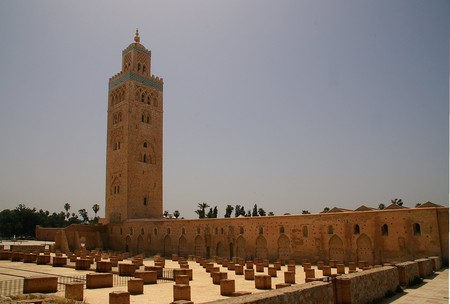 Soaring over Marrakech and the meeting point in the heart of the city, the Koutoubia mosque was built during the 12th century by the Almohad dynasty. Today, at 70m high, the minaret remains the highest structure and the largest mosque in Marrakech. Local laws restrict any new building projects from exceeding the height of the minaret, providing a focal point for all to enjoy.

While the original mosque was built during the Almoravid dynasty’s reign, the Almohad dynasty is said to have levelled the mosque when they came to rule, as the building failed to properly face Mecca. They began reconstruction of the mosque as it stands currently. During the rebuild, the Koutoubia minaret acted as a model to the Hassan II Mosque in Casablanca and also the Le Giralda in Seville, Spain, as the Almohad empire expanded its empire north into Andalusia. Hence, the structure is a fine example of Moorish architecture with its keystone arches and decorative stonework.

Like all buildings in Marrakech, the structure is rose coloured. The name koutoubia originates from the Arabic word for bookseller; back in the day up to 100 booksellers would trade at the entrance to the mosque and in the surrounding gardens. While the booksellers are no longer present, men still sell small trinkets and even nuts and popcorn at dusk when locals gather here to whittle away the hours under the shade of the orange trees. 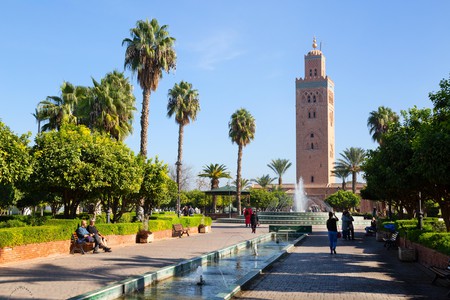 While the muezzin calls the adhan (call to prayer) five times a day over the city, the mosque is off-limits to non-Muslims. But it’s worth it to wander around the base of the building, seeing the ruins and the cisterns if they are open (during special events only), as well as the lovely gardens.
📅 The mosque is open to Muslim visitors during prayer times